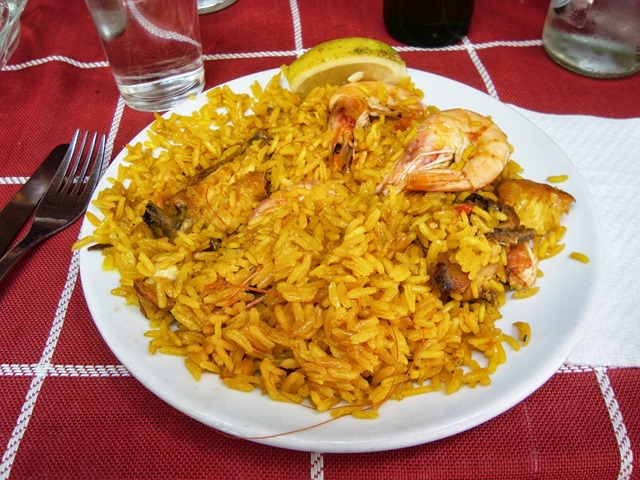 I forget what this was called on the menu. It was enormous (the plate in this picture is about the same size as the plate in the previous picture): 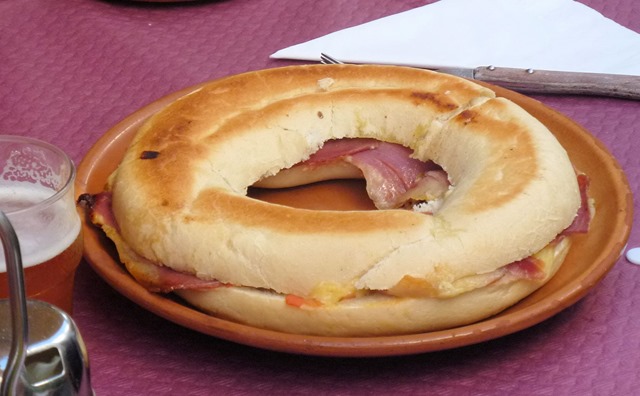 Robin’s favorite place in all of Nerja: 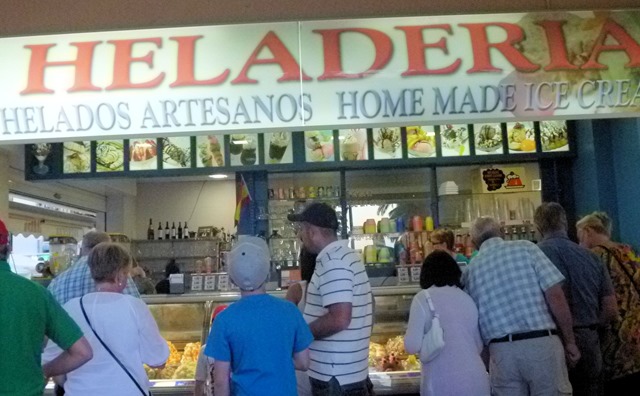 Let’s see, what can I dump into this catchall post featuring “highlights” from our time in Nerja?

Language is always interesting in Spain. I don’t know why … it’s not like I practice speaking Spanish between visits, and it had been four years this time around … but I’m mostly comfortable speaking now, comfortable with my mistakes, and thus far more fluid than I used to be. Sometimes one of my family would ask me about a specific word, and I would usually fail to be of assistance, but when I was talking, words just flowed without my actually thinking about them. It wasn’t perfect … I spoke to the immortal Ayo, told him my wife had been on Spanish TV with him in 2009, and said she was “famoso”. “Famosa”, he corrected. More often, problems would arise when the two parts of my brain got in each other’s way. As long as I was locked into Spanish, things were fine, but when my American roots showed, anything could happen. Once, I stopped in a tourist assistance office, looking for a pharmacy. “¿Dónde está la farmacia cerca de aquí?”, I asked, and was told “Calle Pintada”. I replied, “Oh yeah, we just passed it.” (The pharmacy was interesting, as well. I was looking for chewable Pepto Bismol, and had brought a couple along as samples. I wasn’t getting anywhere with “para el estómago” or “para la diarrea”, but then I said, “como Immodium”, and that turned out to be the magic word. “¡Immodium, sí!", and off she went to get the medicine.)

We didn’t have wi-fi at our apartment in Nerja, and maybe it was the regular posts I’d made the week before from Ronda, where we did have net access, but people seemed to be unaware that I’d be checking online sporadically, at best. I’d get online for five minutes at a café, check for important emails, maybe leave a quickie message on Google+ or Facebook, and people would ask where I’d been, as if I’d disappeared forever.

Food … I could write all day about the food. Lots of pork, nightly ice cream cones, Fanta Limón (it was hard to find Fanta Limón Zero, but I did come across Fanta Limón sin gas, which I didn’t try). I discovered a new-to-me tapa, masita de chorizo, little chorizo burgers, which were yummy, but I only saw them in Ronda.

We walked around a lot, which we always do, but this time, we had my sister, who was wearing something that counted her steps. She informed us that we walked 14,000 steps one day.

I made a note to myself to say something about “Johnson”, but now I can’t remember what that refers to.

I’ll finish with probably my two favorite stories from Nerja. One afternoon, we went to Cochran’s for drinks. It’s an Irish pub with a gorgeous view … I get the feeling it’s popular with the British ex-pats. We’re sipping our beverages of choice, looking at the Mediterranean, while piped in music played fairly softly in the background. I heard a song I recognized, although it threw me off for a bit, since it sounded like a remix rather than the original. It was Cee Lo Green’s hit, the one that had been edited for radio and TV as “Forget You”, but which before the editing was the much more emphatic “Fuck You”. Remix or not, it was “Fuck You” that we were hearing. The word “incongruous” comes to mind … sitting in an Irish pub on the Spanish Costa del Sol, hearing “Fuck You” as we drank.

But my favorite of all moments on this trip came when we were at El Pulguilla, which was a tapas bar in the front and a restaurant in a huge outdoor eating patio in the back. Our waiter was quite charming … and here I should stop to note that whenever the whole bunch of us was together, there would be a mélange of halfway-decent Spanish, English-with-a-couple-of-Spanish-words, and the occasional effective use of pointing at the menu from our crowd, while the waiters generally had enough English to get by. This waiter’s English was pretty good, perhaps better than he realized, although, as would be seen, he also took some pride in his English. We asked for the wi-fi password, and he said something that sounded like “bah-tee-cah-no”. I told everyone it was spelled B-A-T-I-C-A-N-O, and we went to work, but no one could get connected. He repeated the password, but still nothing. So he wrote it down … and in Spanish, the letter “v” is pronounced very much like a “b”. The password he wrote was “vaticano”.

Now everyone was connected, and we all had a laugh at our expense. At which point he smiled, and proceeded to recite the alphabet to us in English: “ABCDEFGHIJKLMNOPQRSTUVWXYZ!”

The waiter and I then congratulated each other for doing our part to improve international relations.

Here we all are at the end of the meal, photo taken by our waiter: 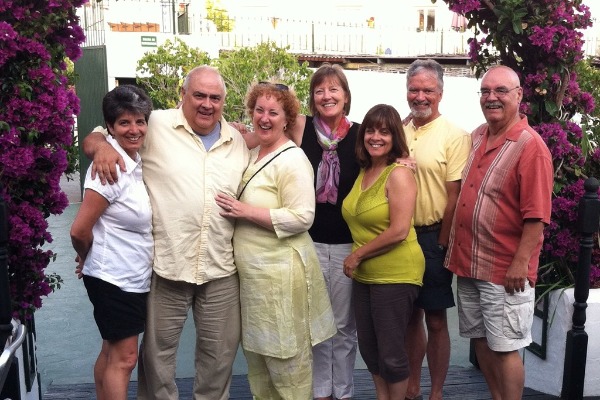 Yes, I went back for seconds at Ayo’s: 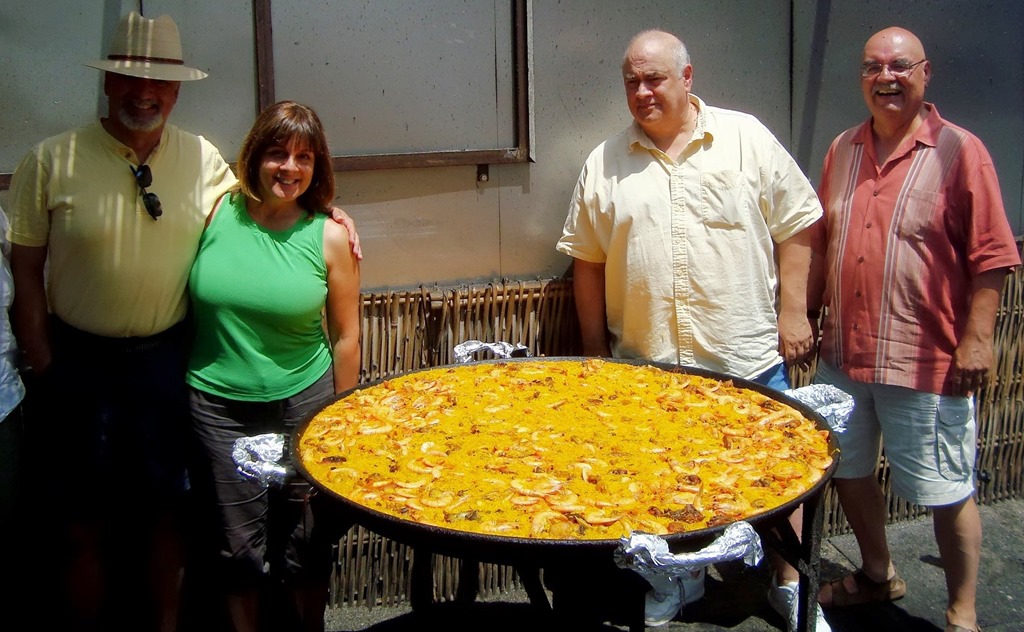 i have to start somewhere

The last time I posted “live” was two weeks ago, two weeks in which we had our usual fine time in Nerja, but went without Internet access for most of that time. So there will be a few vacation-related posts, and a handful of photos, and then back to normal. I posted several times from Ronda, so these will stick to the two weeks in Nerja.

We stayed in an apartment on the Mediterranean with my sister and brother-in-law, Sue and Paul. My sister and sister-in-law, Chris and Karen, were also in Nerja but stayed at a different place, and my brother Geoff, who was staying in Sevilla, visited us for a couple of days. Here is the view from the balcony of our apartment (Geoff took the original): 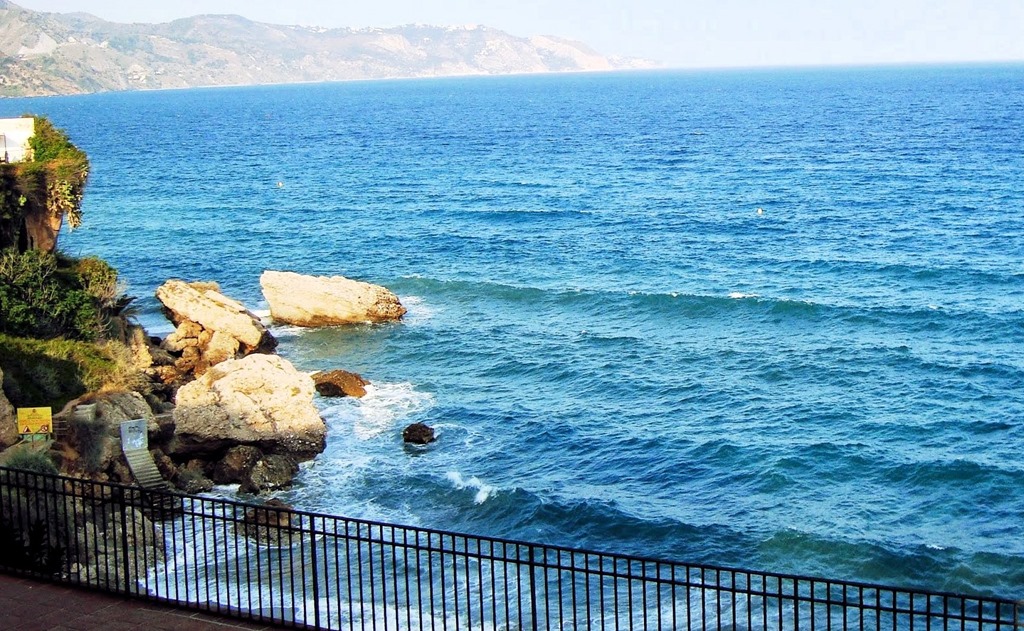 not quite the end of the line

About to go to bed after our last night in Ronda. We leave tomorrow for Nerja, where we will meet up with my sisters and their husbands and/or wives.

I told José Maria that we might come visit for a day with the family, and he said if we did, he'd make something yummy.

Now I'll go to sleep while listening to the Giants game. It is very possible I'll be posting much less frequently in Nerja, since we don't have Wi-Fi where we are staying.

I think I'll finish by describing where we ate dinner tonight. There are several restaurants on the small plaza near our room, and as we eat, families hang out, kids ride bikes and kick balls, teenagers goof around, and stray cats look for food at the feet of the diners. We sit on the plaza, but the restaurants are across the street, so there is a constant flow of waiters rushing across the street, avoiding cars and carrying food. Here's a photo: I'm writing this late Friday night. We had a fairly mundane day, even by our standards, and the two highlights were focused on food (no surprise).

This morning, José Maria made us eggs for breakfast, and when I said the only way I eat eggs is scrambled, he said that when you were on vacation you were supposed to get away from the way you do things at home, and so he insisted that I eat a fried egg. It was prepared quite nicely, served on a baguette with butter and herbs. I confess it was very hard for me to get down, although the toast part was yummy. Afterwards, he asked how I liked it, and I politely said it was OK. But he told me it was very good!

For dinner, we went to the place Robin had chosen for my birthday dinner. It was as good as we remembered, and the dessert, a combination of white and dark chocolate, was sinful. I paid the bill with a Visa card, and one thing we have come across is that they seem to expect a PIN number, but we only have them for our debit cards. Things went awry, and so I said no problem and paid cash. As we were leaving, the waiter came rushing out to tell us the credit card had gone through, which meant we had paid twice. He returned the cash, and we then exchanged sorries and thank yous. Did I mention this place is considered by many to be the best restaurant in Ronda?

It was a very nice day. Wherever we went, Robin would make sure people knew it was my birthday. For lunch, our host, José Maria, made a yummy Arab concoction that he cooked in a tangine (spelling?).

I also had plenty of chances to practice my Spanish. At lunch were me and Robin and José Maria, two of his friends who didn't speak English, and a German woman who has lived in Spain for a long time and did speak English. I pretended I knew what everyone was saying. For my sister Chris, I asked what was the best Spanish beer (CruzCampo).

The place Robin had chosen for my birthday dinner was full, so we made a reservation for tomorrow night and ate instead at a small place on the same plaza. As we ate, we saw José Maria, and he came and sat with us and finished our salad for us.

Finally, we had a brief Hangout with Sara, limited by our wifi. A nice way to finish my 60th birthday.

We tried Google Hangouts today. The most successful was with my sister Chris, since we actually had a video chat.

Here is a picture from dinner tonight. I ordered meat kebabs, but what I got was one giant kebab. I tried my best to finish it. I only came this close : 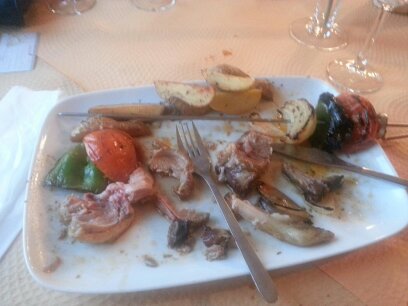 it's tuesday night in ronda, i don't know when that is for you

We slept through breakfast this morning, and thus missed our first José Maria repast. We stumbled out a little after 1:00, hoping to get some food before stuff shut down for siesta. The weather is uncharacteristically cool, and we don't really have clothes for that (it will be warm again tomorrow). Robin had some tortilla de patatas tapas and a couple of cafe con leches. I had a bocadillo con jamón serrano y queso. I also had a Fanta Limón. We walked into town and came back in time for a siesta.

But siesta had to wait. José Maria made a big pan of paella... a lot of his family was here, his mother, two daughters, one grandson, one aunt, and we think one son-in-law. He invited Robin and I to join them, so we all sat down for some midday paella. It was an honor. I got to practice my Spanish with a whole family of Andalusians. Later, a lovely couple from the Netherlands who had just arrived at the hotel joined us, giving Robin a well-earned chat in English. Finally, José Maria's aunt talked to me about ways to find family in Estepona.

Eventually we took a nap. As I type this, it is about 8:00 PM. I just woke up. When Robin awakes, we'll have to figure out how to brave the cold to get dinner. I expect this will be the last time on this trip that we have that particular worry.

I'm typing at the blog website using José Maria's surprisingly useful wi-fi, via my Nexus. Don't know if I will be able to post very often in Nerja, but I should manage a daily post while we are here in Ronda.

Here is Robin in the jardín with her new friend : 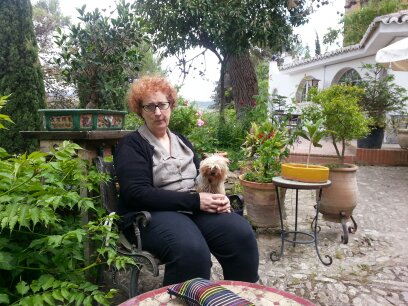