We have made this Ronda/Nerja trip many times, now ... 2000, 2003, 2007, 2009, 2013, and now 2017. We love it or we wouldn't do it, but neither of the cities have changed much over the years, so if I took lots of pictures, they wouldn't look different from all the ones from the past. We've also done the usual touristy things multiple times, and eventually even the Alhambra and the Caves of Nerja lose their appeal. So I check in on Facebook when we go out to eat, and post the occasional photo. Like this one, the view from our balcony: 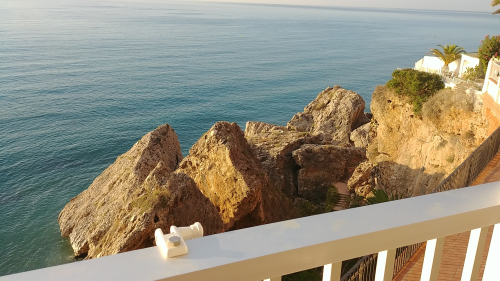 And this one, of our street, Calle Carabeo: 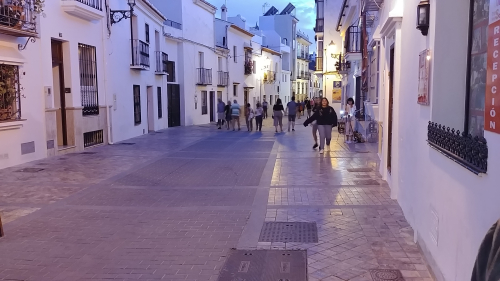 and now we're in nerja

WiFi is touch and go, so these posts will come erratically. We're both under the weather today... Well, Robin has a cold, for sure.

We've eaten dinner at one of our favorite places, and even managed to approximate Spaniard norms... We didn't go out to eat until 8:30 or so. And we made the first of many trips for ice cream cones. We've also hit the mini-mart across the street two times in less than 24 hours.

Meanwhile, here is the view from where I am typing this: 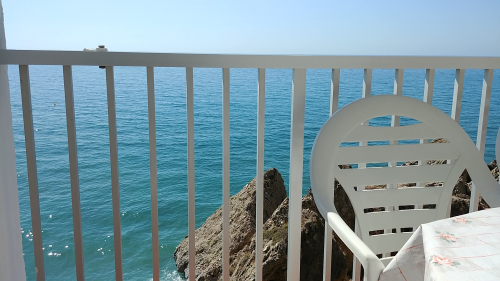 And the ice cream parlor: 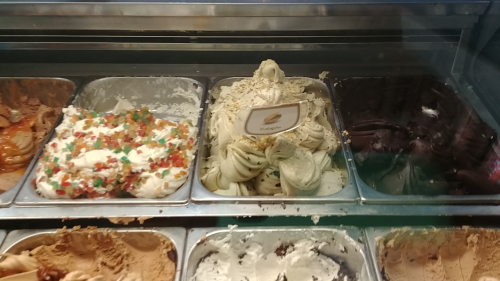 I have written a lot more during previous trips to Spain. There are two basic reasons why I'm writing less this time. The main reason is that I didn't bring a laptop on this trip, so any writing I do is done on my phone, which is not the easiest way to compose. For certain, I would write something about Grant Hart but that will have to wait. The other reason is that, having read through posts from earlier vacations, I realize I've told these stories before. That's what I get for always returning to the same places every holiday.

But there are a couple of variants so far in Ronda. I've written in the past about the Andalusian tendency to slur their way past the last syllables of words. We may have a new record in this regard, from a man who pronounced "de nada" as "naaa" (closest I can get).

Our host in Ronda, José María, has actually let slip one or two entire sentences in English. One interesting note is that he says when Robin speaks English, he can't understand a word she says... too American. We don't know why this doesn't apply to me, although I try to stick to Spanish in our conversations.

But mostly it's more of the same, exemplified by today's schedule (I'm writing this on Friday). We got up and stepped into the garden for breakfast around 11:00. We talked for some time with a man from Holland. Eventually Robin decided she was hungry, so we had lunch where we had just eaten breakfast. By the time we finished, it was past 2:00, which means siesta time. So now we're back in our room. We haven't left the Jardin de la Muralla yet today. And since José María has invited us for paella this evening, we may never leave this place until tomorrow when we will go to Nerja.

We are a thrill a minute. 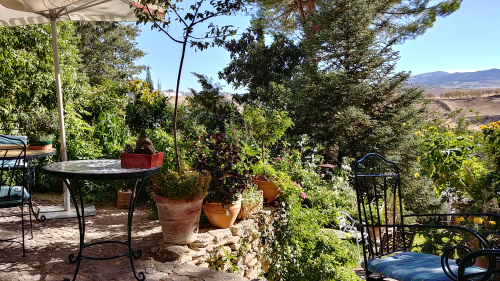 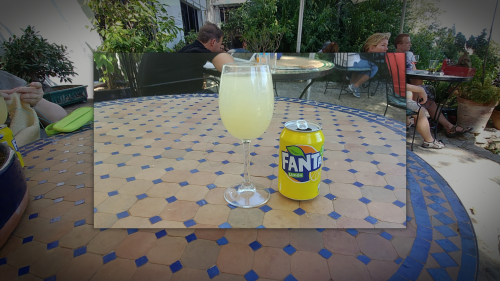 A few photos from the beginning of our trip. Apologies... I am writing this on my phone.

There was plenty of room on our flight to London. 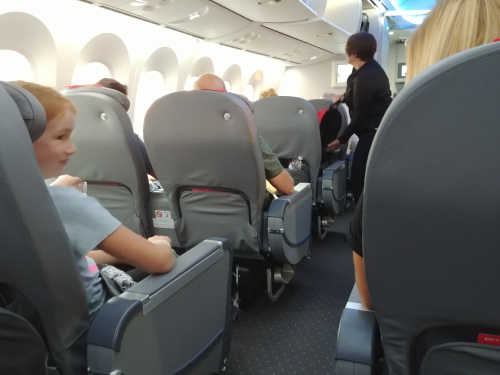 Our room in London was tiny. 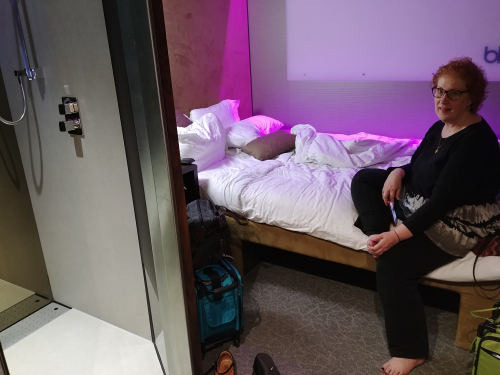 There was more room at Jardin de la Muralla. 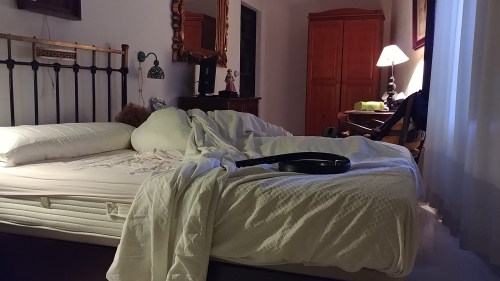 The bread at breakfast was plentiful. 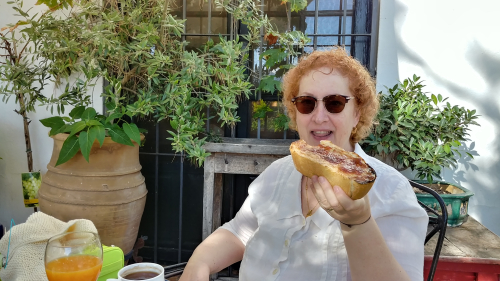 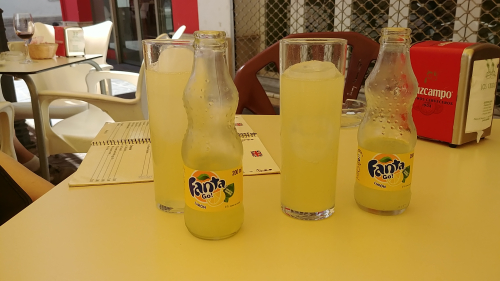 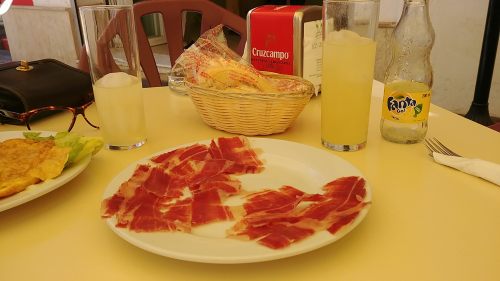 Considering I arrived on Thursday afternoon and we left on Sunday afternoon, I guess it was really three days spread out over four.

We hadn’t been since 2009. We didn’t do a tour ... you can actually take a Portlandia tour, for instance ... and outside of a trip to Tualatin, about a half-hour’s drive away, we spent the entire time in NE Portland. We weren’t there to take in the sights, we were there to visit an old friend. Still, even with a limited trip, you notice things, mostly about the ways Portland seems different than Berkeley.

First, they aren’t all that different. Much of what gets gently parodied on Portlandia holds just as true for Berkeley. Berkeley might be more pretentious about it, although I can’t really speak to what Portland is like on a daily basis.

Most important, though, is the weather. It was slightly colder than we are used to, but what really mattered was the rain. The Bay Area, at least our part of it, is semi-arid, and of course we’ve been in a drought for a long time now. Portland? Well, in fairness, it rarely poured while we were there. But a drizzle never left us, and in some ways, a constant drizzle is more depressing than a serious downpour.

Another, water connected, difference: there was no clamp on water pressure in our hotel ... the water came blasting out of the shower.

Since we weren’t home for our usual Saturday morning at the Homemade Café, we were glad to find Batter Griddle & Drinkery, which wasn’t nearly as precious as its menu suggested (the pancakes section included “mocha me go”, “don’t passover”, and “pecan do it”). Like many places we checked out, it felt roomy ... there is more land and fewer people in Portland than in San Francisco, although the population of Portland has almost doubled since we first visited.

I didn’t see Corin, Carrie, or Janet anywhere, not that I would have done anything besides mess my pants if I did see them walking around. Oh well, I’ll see them on New Year’s Eve.

Meanwhile, the pilot announced to us before our flight home that we were traveling to "Oaklandia".

It’s a story I’ve told before, but it is Throwback Thursday, after all.

My wife and I made our first trip to Europe in 1984. We stayed with Robin’s sister and her soon-to-be husband Peter in England ... I want to say they lived in Little Bookham, but I’m not sure. As I recall (I’m only going to say that once, but imagine I’ve said it before every sentence ... this was 32 years ago, after all), we quickly took off on a car trip. We were staying for three weeks, so time was tight. We drove down through France after taking the ferry (urp, barf), and crossed over into Andorra, which I probably didn’t know existed at the time. Then to Barcelona, where Peter had family ... he was a true European, English heritage but with time spent in Spain and France at least, conversant in several languages. While in Barcelona, we visited the Museu Fundacio Joan Miro, where Robin’s sister took the following photo, which recently turned up on Facebook: 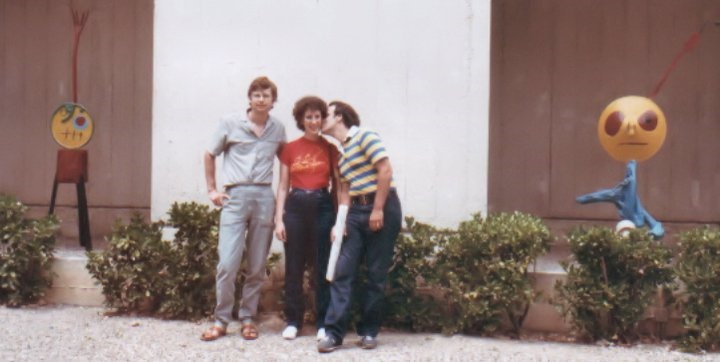 I’m not sure what order we did things, but either going to or coming from France, we shopped in Andorra, which was duty-free. We also spent a night in the Pyrenees at a place Peter’s family owned ... there was a town named La Seu d’Urgell, perhaps it was there. On our way back through France, we spent one night in Meung, a small town on the Loire where I had the best birthday dinner of my life.

Back in England, Peter took me to Wimbledon. I always say I saw McEnroe and Connors at Wimbledon, which is technically true, although it was in different matches. Connors beat a fellow American, Lloyd Bourne, on Court One, after McEnroe had dispatched Australian Paul McNamee. I have long forgotten this, but McNamee actually took the third set in that match, making him the only player to do so against McEnroe in the entire tournament.

What brings all this to mind is a different sport. Euro 2016 is going on right now in France, and when we vacationed in 1984, the Euros were taking place, also in France. Wherever we went as we drove from England to Spain and back again, people were glued to their televisions. Spain made it to the finals, where they lost to France, 2-0. It was then that I discovered my first soccer hero, Michel Platini, who scored nine goals in the tournament (no one else scored more than three). What I knew about soccer in 1984 would barely fill an English teacup, but I have Platini to thank for getting me interested. (Here's a link to all of his goals: https://youtu.be/IU9S9oaa-AU

Platini was indeed one of the greatest soccer players of all time, and after his playing days, he went on to have a significant career in administration, spending eight years as President of UEFA. Sadly, not all stories end well ... he is currently banned for ethics corruption. Not to excuse him, but he was born at the wrong time ... it would seem that every soccer administrator today is steeped in corruption.

I retained a lot from that European trip. It was my first time in Spain (albeit we never got close to Andalucía ... that waited until 2000). When we went to Europe, I had just finished ten years in the factory. I guess it was a case of “How Ya Gonna Keep 'em Down on the Farm (After They've Seen Paree)?”, because within a couple of months, I had walked off the job, never to return.

thrown back from wednesday

Really belonged on Throwback Wednesday, but there is no such thing. Yesterday would have been Orson Welles’ 100th birthday. Here I am on Paseo de Orson Welles in Ronda, Andalucía. Welles’ ashes are in Ronda. 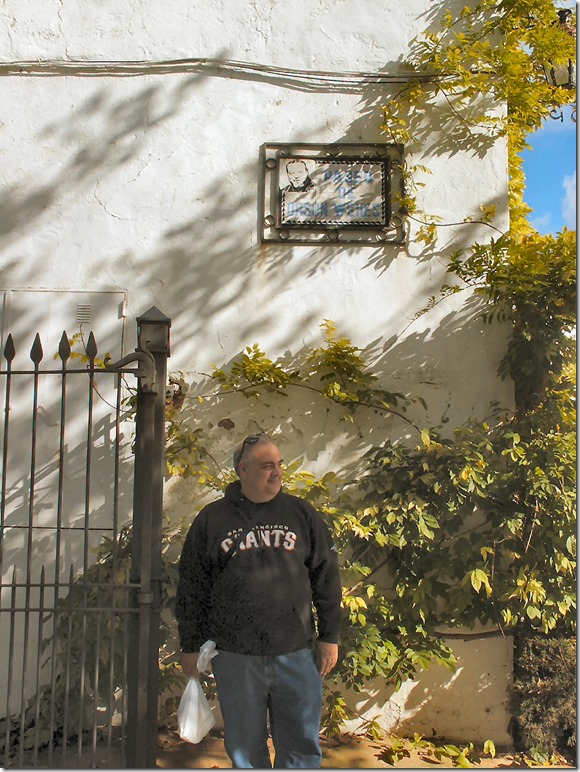 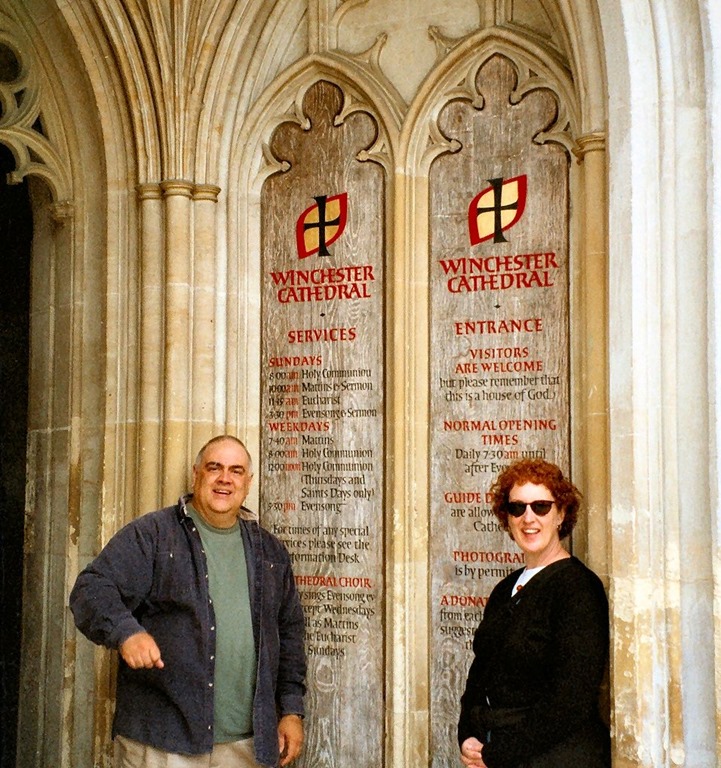 In 1966, the song “Winchester Cathedral” was a worldwide smash, selling 3 million records. The artist’s name on the label was The New Vaudeville Band, which didn’t really exist, although one was formed for touring purposes after the record became a surprise hit. In the U.S. it hit #1, supplanting “You Keep Me Hanging On” by The Supremes. It hung around the top spot during the month of December of ‘66, taking #1 on the 3rd, relinquishing the spot to “Good Vibrations” for a week, then regaining the top for two weeks before finally being knocked out for good on the last day of 1966 by The Monkees with “I’m a Believer”.

When the Grammy Awards were given out for 1966, a year of Revolver and “Monday Monday”, the award for the Best Contemporary Rock & Roll Recording went to “Winchester Cathedral”. You can see why Robin and I had to take that picture.

if it's thursday, this must be rosas 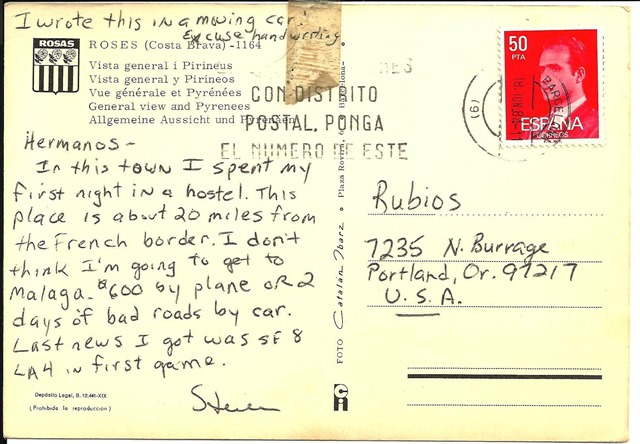 It was our first trip to Europe … we stayed and traveled with Robin’s sister Tami and her soon-to-be husband Peter, who lived in England. The first night we were in Spain, we stayed in Rosas, on the Costa Brava. My memory is we arrived at night, and it wasn’t until the next day, looking out the balcony of our hostel, that I realized Rosas was next to the water. From there, we went to the house of Peter’s sister in Castelldefels (I think), a suburb of Barcelona. This would have been around June 13, 1984 … a week or so later, I spent the best birthday of my life in France.

The “Hermanos” were Geoff and David, who must have been living together in Portland at that time. The Giants game I referred to took place on June 11, which also narrows down the time frame. On June 12, the 1984 European Championships began in France, my first taste of the power soccer had over entire nations. As I recall, we ate in one French place that was more like a house than a restaurant, with a TV in the next room that kept the workers occupied. It was the tournament that gave me my first soccer hero, Michel Platini, who scored nine goals overall, including one in the final vs. Spain.

When my wife was on Spanish TV: 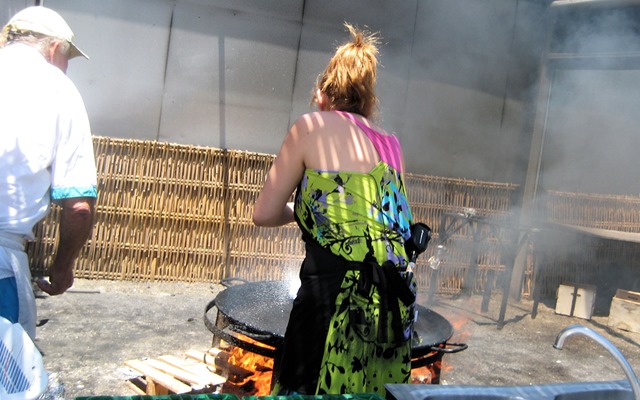