View from our balcony: 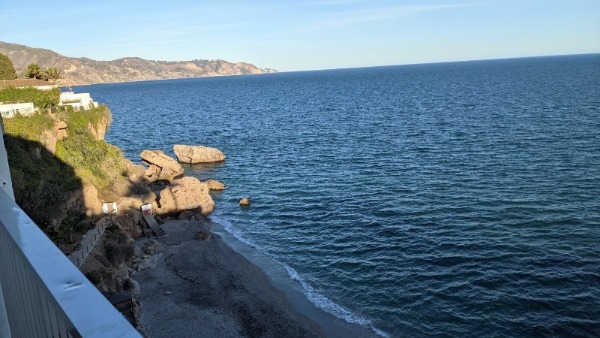 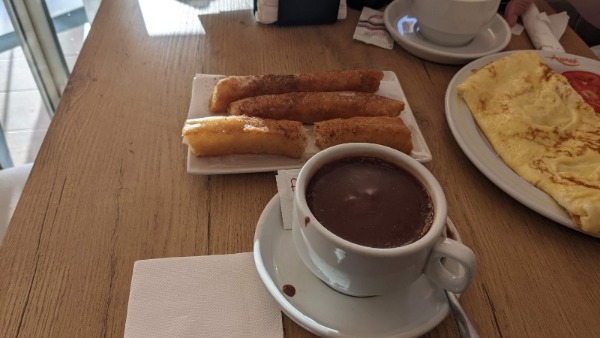 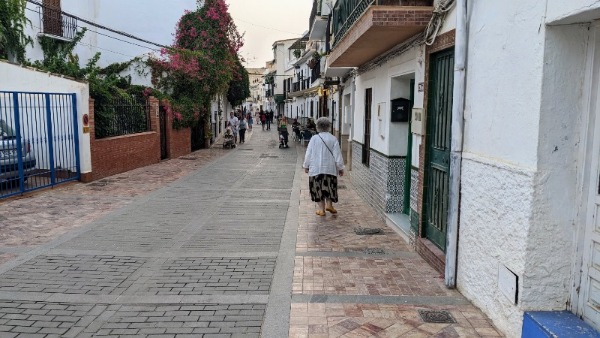 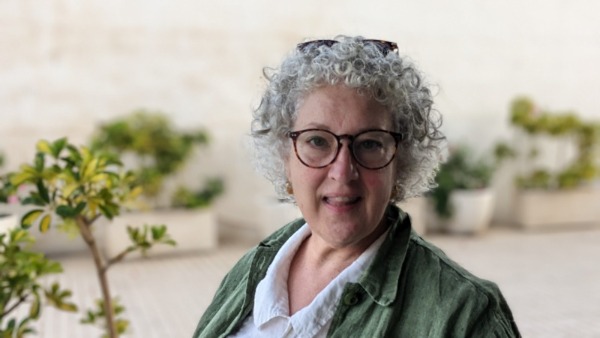 Rocks from our balcony: 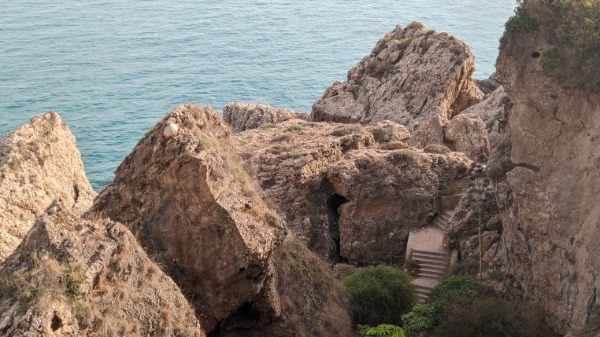 Esposa on the beach: 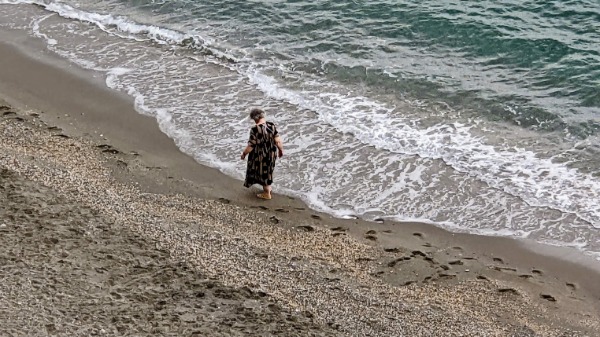 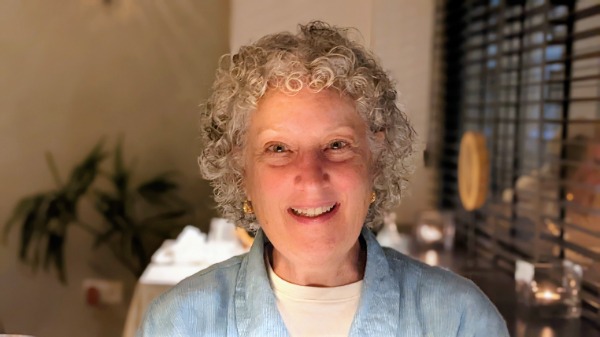 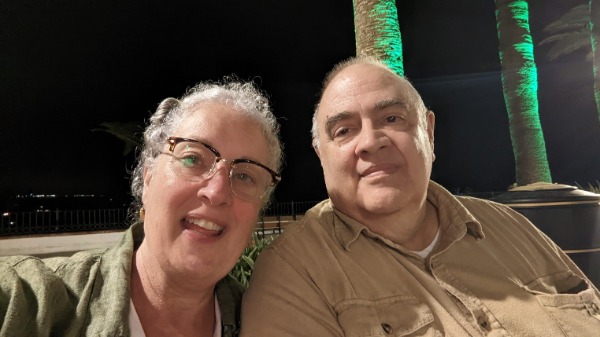 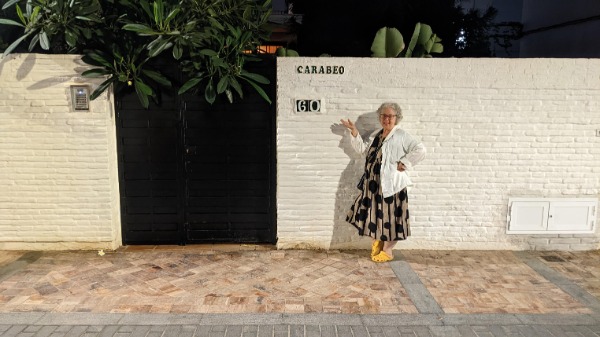 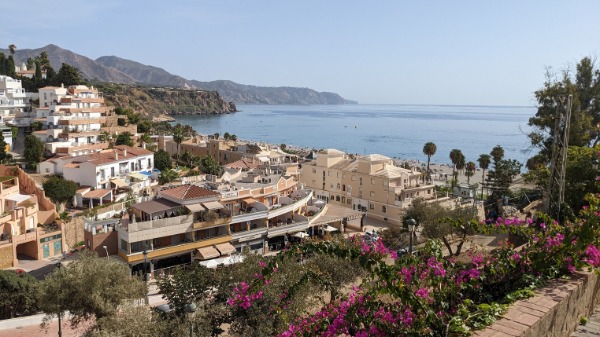 More of the things that make being here slightly better than just taking a vacation,

I went to the pharmacy to refill a prescription. Before I could say anything, the pharmacist asked me to wait a second, after which she went in the back and came out with my medicine. I'm being recognized at "our" pharmacy!

We went to dinner with friends last night. Yep, we have friends in Nerja. Nuttee and Frans run several rentals here, and we have stayed with them a couple of times, including last year when they took us to dinner. This year it was our turn to repay the favor. They are a fascinating couple, she from Thailand, he from Belgium, together for a long time in Nerja. 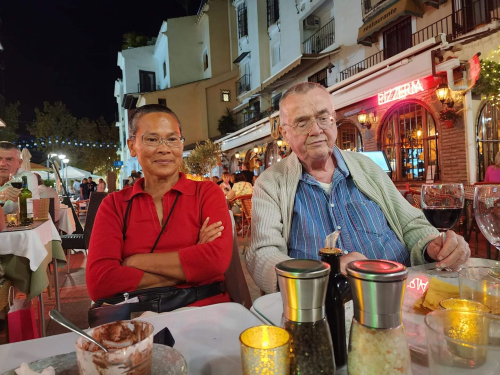 Mask wearing in Spain. We are pretty paranoid in general. We both have gotten five total vaccines... I think that means three boosters but I can't keep track. We wear masks at the movie theater. We wore masks on the flight over. But in Spain, they cancelled the must-wear mask law several months ago. So no one wears masks.

And neither do we. Not sure why, but it is definitely liberating. I'm sure we'll go back to masks when we get on the plane home. But until then...

Unrelated: When we were kids, our dad would get up in the middle of the night, head for the kitchen, get a slice of bread and a piece of lunch meat, and eat it plain. It always seemed odd. Then I came to Spain and learned about bocadillos. Which are just sandwiches, but the basics are just a baquette sliced in half, with jamón, and nothing else other than some olive oil or tomato. And I realized that's what our dad was making all those years.

settling in at nerja

It's our fourth day (happy birthday to my wife!), and there are a couple of things that make it more special. Specifically, being recognized.

We often have breakfast at Anahî, and over the years there is one waitress in particular we look forward to. She wasn't there during our first couple of visits, but today she was working. Best of all: she remembered us! This is also true for the man who runs the mini market across the street from where we stay. It's kind of amazing that with all the people they see during the year, they remember us.

Meanwhile, my possibly disastrous medical situation is resolved. My insulin was lost on our plane trip, leaving me with only the two half-empty bottles I had on my person. Luckily, I returned to the Nerja Medical Center (I'd been there last year) and they wrote me a prescription. The Farmacia la Ermita did a special order, and today I picked it up: We leave tomorrow for Spain. I have pre-scheduled posts for Music Friday and Letterboxd Season Challenge, and will post from Spain when/if I can. 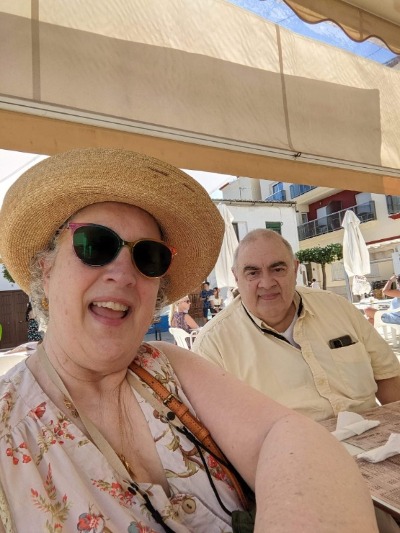 (Many of these photos were taken by Robin)

Me at the British Museum: 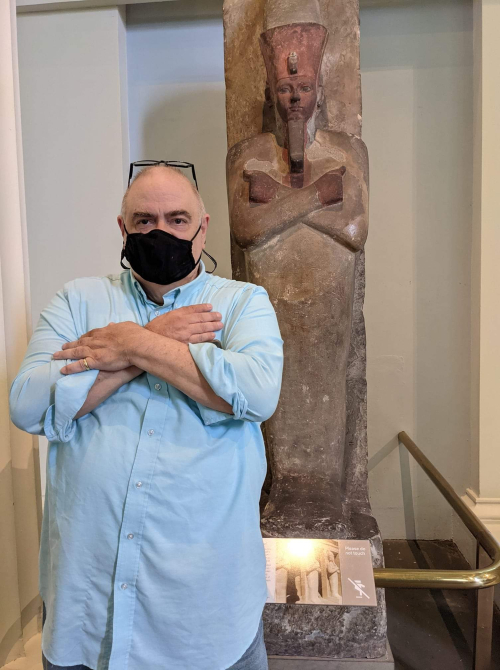 Robin at a yarn store in London: 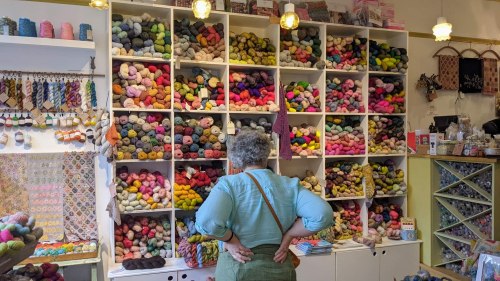 A nightly ritual in Nerja: Robin eats ice cream at the Balcon: 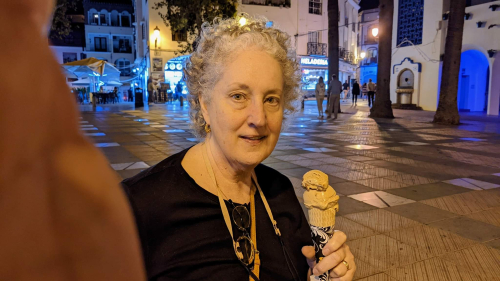 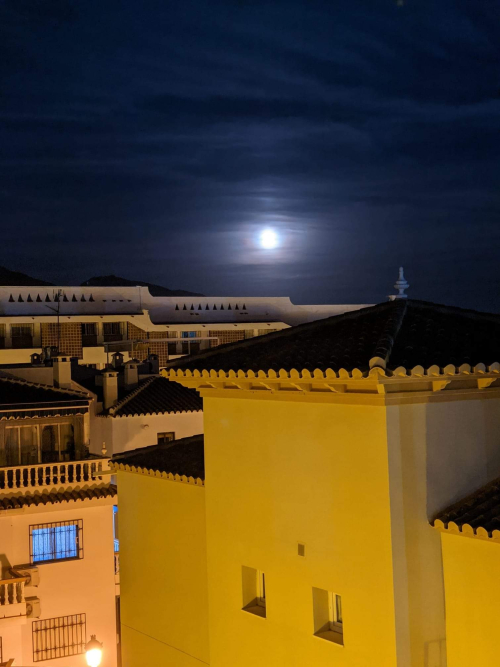 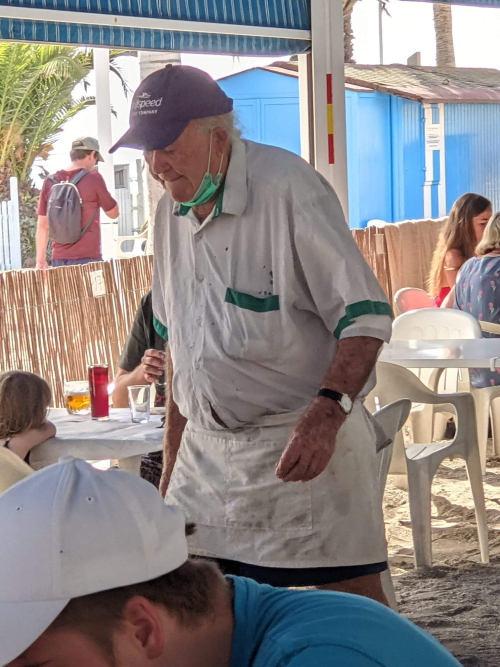 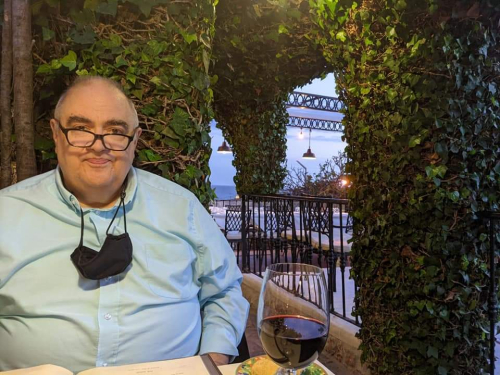 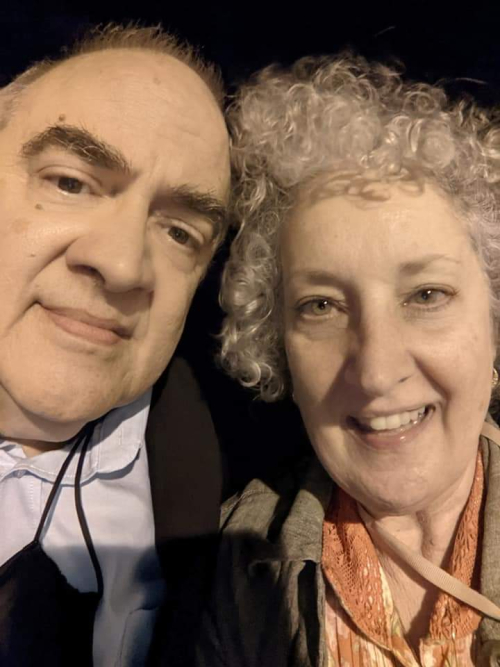 Must be time for a final post from Spain, although we don't leave here until Saturday. But there's a pre-written, post-dated Music Friday tomorrow, and we'll be travelling on the weekend, so I likely won't have a chance to write again until we get home.

I re-read past travel blog posts, which reminded me that we always do the same thing, and thus there's not much new I can say. I seem to watch a TV show or two on these trips, most famously when we watched the Sopranos finale on "borrowed" wi-fi and thought the wi-fi had gone out at the end (of course, most of the world had similarly panicked thoughts about the cable going out or whatever). This is the trip where I watched Squid Game, partly because Netflix is the only streamer I can access properly from here. (I've only seen six episodes as I type this, with Ep. 6 being the best, partly because of the setup of the first five episodes.)

I've taken a few pictures, and my wife has taken a few more, but I'm writing this on my Kindle and the photos are on other devices, so maybe I'll post a couple next week.

The main thing I've noticed on this trip is my attempts to speak Spanish, although looking back on those older travel posts, I see I always think about this at some point. I feel more comfortable than ever, although even there, I have written on previous trips about my improvements. I guess the main thing now is that comfort level ... I hardly ever think about it, I just talk. A couple of instances suffice as explanation. Last week, the door bell rang, which was odd, so I answered the door and a man I didn't know was standing there. He said the name of someone ... it wasn't Steven or Robin ... and  then, puzzled, asked if I was Spanish. I answered that I was American but that I spoke Spanish. Turned out he had the wrong apartment, but the thing that stuck with me afterwards was the way I said I spoke  Spanish as if I actually did speak it. Then last night at dinner, we did what we often do, with my wife ordering from the English-language part of the menu and me ordering from the Spanish part (she got Iberian pork, I got solomillo de ternera con pimienta verde). The waiters here are all at least bilingual, since it's a tourist town with lots of Brits, and they assumed after Robin ordered that I was going to also order in English. When I asked for the solomillo, the server said, "Oh, you speak Spanish!", and I answered "yes". Again, it was the casual way my answer came out, as if it is perfectly natural at this point that speak Spanish. (I should note that my grammar still sucks, and I often struggle to come up with a particular word, but mostly I've got flow.)

Tonight, our landlords are taking us to dinner, and tomorrow is open, although I imagine we'll spend time packing. Still, I might milk one more post before we leave. Until then, ta luego.

On Sunday, we went to dinner with a friend my wife had made in a Nerja group on Facebook. It was a nice evening with an energetic companion. We spoke mostly in English, but it was interesting that occasionally she and I would lapse into Spanish, or perhaps more accurately, Andalusian (I'll get to that in a bit).

I was fascinated by her perspective, as a native not only of Andalusia but of Nerja itself ... she was born here in 1975. As we ate ice cream on the Balcon de Europa, as we have done so many times over  the last 20+ years, she offered her memories of being on the Balcon when she was a kid. It reminded me of when we once visited Stonehenge with friends who had grown up nearby ... to them, it was mostly just a place to play on as a kid (which apparently you could do back in the day). Our new friend loved Nerja, and in some ways her Nerja was an even more romantic place than for us tourists.

Throughout the evening, she related to the town differently, obviously. Walking past one restaurant, she said she waited tables there for her first job ... it had a different name, then. I asked her if she watched Verano Azul when she was young, and she replied yes as if the answer was obvious. Verano Azul was a Spanish television series, a teen drama shot in Nerja and shown in 1981-2.

She also reflected on the impact of Franco on Spain. One thing I hadn't thought of specifically is that, as she remembered it, Franco hated Andalusia and its people. He had tried to force the country into a unified Spain, forcing Castilian Spanish to be the only accepted legal language, and fighting against the regional cultures that lent diversity to the country. Andalusia was the hardest-hit area during Franco's reign of terror. Our friend said Andalusians felt separated from the country, which thought of them as gypsies at best, a culture that didn't even speak "proper" Castilian Spanish.

All of this added the local perspective to the tourist's view we have experienced in our seven visits to Nerja. It was not just a fun evening, but an instructive one. 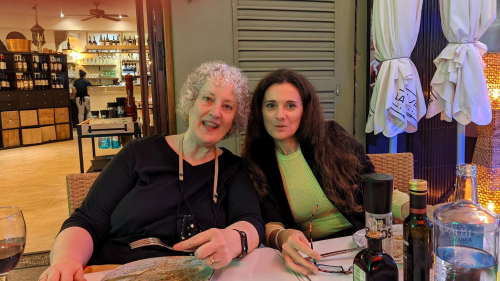 our current home away from home

This year, we are staying at one of the apartments run by Frans and Nuttee, who we first met when we stayed at their Casa Charlotte some years back. It's hard to imagine better hosts. Frans is Belgian, Nuttee is Thai, and they are lovebirds (they call each other "My Darling"). Nuttee came by today so we could finally pay her ... one example of their hospitality is that we rented the place months ago, and have been here more than a week, now, but we didn't have to pay in advance ("we'll get to it"). She had scheduled a cleaning crew to come today, but someone's kid was sick, so Nuttee decided since she was already coming to get the rent, she'd do the cleaning herself (we're low maintenence and all that was really needed was fresh sheets, although she "Hoovered" the floors anyway). We were running some laundry, and left for a quick stop at the grocery store ... when we returned, she was still there, hanging our clothes on the line.

Part of going on holiday is "getting away from it all", and when you go halfway around the world, you certainly don't expect to see anyone you know. This made it all the more charming when we were having dinner (and sitting outside as we usually do if the restaurant has tables on the street) and Frans and Nuttee walked by. OK, Nerja is a small town, but it was still happily unexpected.

Here is a brief video of our apartment: 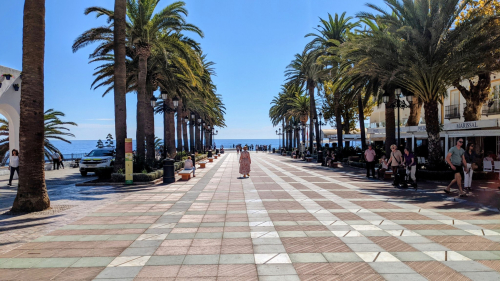 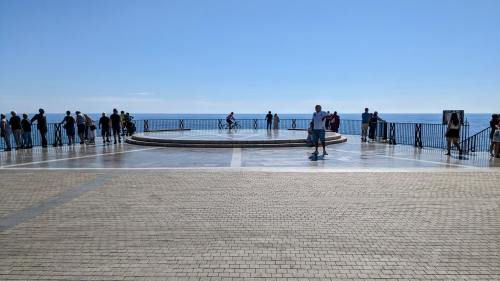 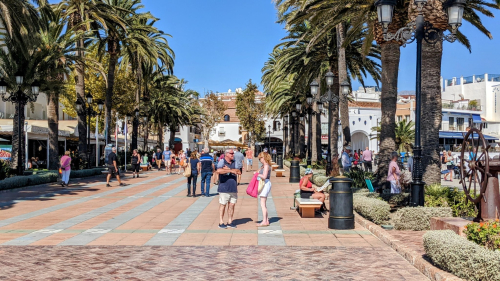