throwback thursday: iran in the u.s. 20 years ago

At the 1998 World Cup in France, a match took place which was called "the most politically charged match in World Cup history". The participants were the United States and Iran. Iran won the match, 2-1, eliminating the USA from the tournament.

In January of 2000, Iran's men's soccer team took a brief tour of friendlies in the United States, including one against the Americans. The first match on the tour was against Mexico, and was played 20 years ago today in Oakland. We were there.

A sign of how relations between Iran and the United States were in 2000 can be seen in the demand by the Iranians that fingerprint formalities would be waived (in those days, Iranian visitors to the U.S. were frequented fingerprinted by immigration authorities).

More than 34,000 fans showed up for the match against Mexico. Soccer fans will recognize some of the names that played in the match. For Mexico, there was "El Emperador", Claudio Suárez, Cuauhtémoc Blanco (currently the Governor of the State of Morelos in Mexico), and Luis Hernández, "El Matador". Iran featured Ali Daei, who scored more than 100 goals for the national team, and Khodadad Azizi, who later spent a season with the San Jose Earthquakes. Goals were scored by Hernández, Blanco, and Daei, as Mexico won, 2-1.

In a tournament where the USA's most marketable player was Alex Morgan, who is in the Mia Hamm mold (pretty, scores goals), it was a "purple-haired lesbian goddess" who was the face of the World Cup. Morgan is so good, she tied for the most goals scored yet seemed to be off her game. But Megan Rapinoe rose to the occasion as few others have. She scored as many goals as Morgan, she was named MVP, and she pissed off the President of the United States. Nothing is more American.

It's a tradition here to post this quotation at the end of a World Cup:

One thing I know for sure about being a fan is this: it is not a vicarious pleasure, despite all appearances to the contrary, and those who say that they would rather do than watch are missing the point.... When there is some kind of triumph, the pleasure does not radiate from the players outwards until it reaches the likes of us at the back of the terraces in a pale and diminished form; our fun is not a watery version of the team's fun ... The joy we feel on occasions like this is not a celebration of others' good fortune, but a celebration of our own; and when there is a disastrous defeat the sorrow that engulfs us is, in effect, self-pity, and anyone who wishes to understand how football is consumed must realise this above all things. 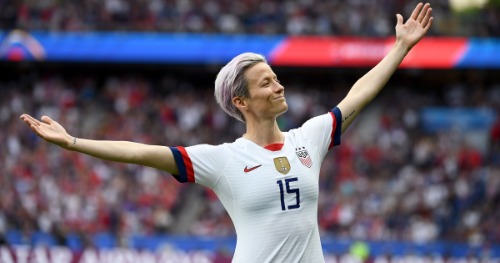 I usually get around to discussing the announcers as the World Cup gets closer to the end. This year is the first where I have only watched in Spanish on Telemundo, so I don't have anything to say about the English-language announcers, with one exception to come later. As I always say when I'm giving opinions on Spanish-language announcers, my take should be filtered through my less-than-perfect command of the language. Having said that, I get better with every year, and I feel more confident about my comprehension nowadays.

I have a World Cup blog I have used in previous tournaments. It remains online as an archive, but I haven't used it in 2019. I have very few readers of this blog, but the size of my audience is Twitter compared to the 1 or 2 people who stopped by the Cup blog. So I've just moved my occasional comments to this regular blog.

Also, while I'm not proud of it, the truth is I don't give as much of my attention to the Women's Cup than I do to the men's. Oh, I spend more time than most, I suppose ... I'd be surprised if very many readers have watched a single match that didn't include the USA, or even if anyone has watched the Americans at all. But I don't let the Women's World Cup take over my life, the way I do every four years for the men. One result is that I haven't seen every match ... maybe half at most.

OK, with all that throat clearing out of the way, some thoughts about some (not all) of the Telemundo crew.

As usual, it begins with Andres Cantor, and his analysis partner Manuel Sol. Cantor is the best-known soccer announcer in the country, and he deserves his reputation. If there's a problem, it's that there are many excellent play-by-play Spanish-language guys who are ignored by the mainstream media, which tends to act as if Cantor is the only one we have. Sol had a long career in Mexican league soccer, and has been a commentator for several years now. He has a good rapport with Cantor, and is OK with analysis. (In fact, no one I've heard has been less than OK ... there are no stinkers.) One problem, though, is that Telemundo also has the U.S. rights to Copa América, a men's tournament featuring South American teams. Telemundo's announcers are doing double-duty, and while Telemundo's commitment to the Women's Cup is solid, Copa América is probably more important to them. So Cantor isn't doing as many Women's games as you'd like, since he is also doing the Copa.

Sammy Sadovnik is the #2 play-by-play guy, which is more like #1A with Cantor's absences. Sadovnik has long been a favorite of mine, so I'm glad to see him here. His voice is unique, which means I recognize him immediately, which I can't say for the other play-by-play guys (and thus, they'll go without mention here except to reiterate that all are at least OK).

Besides Sol, the most interesting color commentator is Viviana Vila. Vila worked the men's tournament last year, which was a landmark in itself (Aly Wagner was her counterpart on the English-language side). Now Vila returns, and she is excellent in her analysis. And she is different from almost all color commentators, including Wagner and the various men who do the job, in that Vila is not an ex-player. She's a professional journalist, a fan of the sport, unequaled in her knowledge ... all important qualities, but it is exceedingly rare for analysts on TV in any sport who weren't first a player in the game.

Deyna Castellanos is the complete opposite of Vila. Castellanos is only 20 years old (I still can't believe this, thinking it's a typo or something). She plays for Florida State, which is one of the top women's programs in the country, but is obviously not professional. Castellanos has played for the Venezuelan national team ... she is not a complete unknown ... and she's done a decent job with her commentary during the Cup. (Interestingly, two years ago Castellanos was a finalist for the FIFA Best Women's Player. This was taken as an insult by some veterans, notably WWC 2019 star Megan Rapinoe, who felt it showed FIFA's lack of interest in the women's game to nominate a little-known non-professional over more veteran players.)

The man who I find most fascinating in the Telemundo coverage is Marco Antonio Rodríguez, an ex-referee who has the job of commenting on and explaining referee decisions during the matches. Rodríguez spent close to 20 years refereeing in the Mexican League, and was chosen for three World Cups, where he took part in some infamous matches. It's not that Rodríguez was a poor referee, but he was someone you noticed, and not everyone wants a sports official to be the center of attention during a game. He became known as "Chiquidrácula" due to his resemblance to a character on Mexican TV, a fact I don't think I knew ... I just thought he looked like a Bela Lugosi Dracula clone. Truth is, he was a fine referee, but fans are always looking for reasons to hate the men in black, so Chiquidrácula wasn't very popular. He prefers the nickname "Chiquimarco", as he is a devout Christian, and this seems to be taking with the general populace. Anyway, his analysis of referee decisions has been very good during this World Cup. More remarkable, from my viewpoint, is that he is a fine team member with his fellow announcers, who all enjoy banter with Marco Antonio. I'm sure he's always been a nice guy, but I had no idea, and it's still a bit startling to hear him and his colleagues chatting happily about the match.

Finally, switching for a moment to the English-language announcers, I want to single out Danielle Slaton. Of course, I haven't heard her this time around, but she does commentary for San Jose Earthquakes games, so I'm used to her work, and she is top-notch. Slaton, a fine defender in her playing days, gives solid analysis and works well with the announcing team. I'm sure she's done the same for the World Cup. I couldn't let this post go without mentioning her.

goal of the tournament candidate

marta: cry at the beginning to smile at the end

Marta is the greatest, but the Brazilian team has yet to reach the top, finishing second in the 2007 World Cup and in the 2004 and 2008 Olympics. The roadblocks are many.

Today, Brazil lost to host France, 2-1, in extra time. Afterwards, Marta delivered this message to the next generation of Brazilian women (in Portuguese with Spanish subtitles, but you'll get chills even if you don't know those languages):

A crappy translation of part of the above:

Cameroon scores in the 95th minute on a tremendous goal by Ajara Nchout and advances to the next round:

The result here was affected by interpretations of the rule regarding goalkeepers on penalty kicks. Well, that's not exactly true. Goalies are coming off their line, but thanks to VAR ("Video assistant referee"), even the most minute infractions can be spotted, resulting in a retake of the penalty kick, if the first one missed. Unfortunately, that's what a lot of people are going to talk about, when they aren't calling Scotland a bunch of chokers. Despite the above, though, I prefer to note that Argentina pulled off one of the great comebacks in WWC history.

Due to the silly tournament structure (which comes from having 24 participants, and a need to reduce that to 16 teams for the next round), Argentina now has a small chance of advancing to the next round, even though until 74 minutes had passed in this third match, Argentina had yet to score a goal. But again, picky picky picky. Their comeback today was thrilling, except for Scotland, who are now eliminated.

Marta is arguably the greatest women's soccer player of all time. (I'm trying to be fair ... I think she IS the GOAT.) Today, she scored the only goal in Brazil's 1-0 win over Italy that ensured she'll play at least one more game for Brazil.

On Twitter, the #1 topic was about Marta, but it wasn't the penalty. It was her lipstick, which practically broke Twitter. Some were surprised she wore lipstick. Others wanted to know the brand because, as one person tweeted, "I just think it's unfair that Marta's lipstick is flawless 70 minutes into a World Cup game and I can't ever get mine to stay nice for more than 30 minutes on a normal day". The Miami Herald was on it: "Brazil’s Marta and her lipstick get Twitter love after record-setting World Cup goal".

Eventually, the truth was revealed ... Marta was wearing Power Stay by Avon Brazil. Apparently, she has an endorsement deal or something.

I'll use any excuse to post my favorite Marta goal, one of those 17 World Cup goals:

The USA beats Chile 3-0, and the player of the game is ... Chilean goalkeeper Christiane Endler?