I wrote about Marianne Faithfull just a couple of months ago, but I'm always looking for material I can write in advance of a month's vacation, and we saw her on this date in 1983, so here's a bonus from her 1983 album A Child's Adventure:

Will I kiss and cry and wake to find
A sordid stranger by my bed?
Will the world shake its sensible head
And say the words that have to be said?
She's got a problem

I'll be writing the next several Music Fridays in advance, since I'll be in London and Spain for most of October. I picked Patti Smith for this week because, if the COVID doesn't get us, we will have seen Patti at the Royal Albert Hall on Tuesday the 5th. I've seen Patti Smith enough now that I can no longer remember how many times. The first came in 1976, at The Boarding House (capacity 300?). Here is that show:

A friend of ours says we don't do enough "bucket list" things on our holidays. He's right, but this probably qualified: going to the Royal Albert Hall. I've lost count of the number of times we've seen Patti Smith, but I know the first time was in 1976. She was touring behind her recently-released debut album, Horses... she was 29, we were 22. We're all a lot older now. To some extent, our current age mattered. I felt creaky in my bones, and for all I know, so did Patti, but she didn't show it. She had the vitality of an artist who wasn't going gentle into anyone's night.

While there were plenty of people in the audience in our general age group, there were also a good number of younger fans, which was nice. We wondered what had brought them to the show, and when they exploded during "Because the Night" (Patti's hit!), we understood they respected her icon status but loved her far more than just because she was old. They bantered with her between songs ... "I love you, Patti!" was popular, and one person asked, "How are you still so cool?" (She said it was genetics, which made her son Jackson, who is a guitarist in the band, laugh.)

It was rather remarkable that two members of the band were also with her back in 1976: Lenny Kaye and drummer Jay Dee Daugherty. There were lots of callbacks to past times, but it wasn't a nostalgia show.

Blame It on the Sun (Stevie Wonder cover)

One Too Many Mornings (Bob Dylan cover)

Pissing in a River

Land/Gloria (crowd was nutty by this point)

People Have The Power

My Generation (Who cover) (she fucked up her guitar, of course)

Six of those songs were played in 1976. "My Generation" in particular combined the power of her earlier rendition with the continued irony of the lyrics all these years later (including her immortal "I DON'T NEED THAT FUCKING SHIT!").

I could be silly and say this was the best concert I ever saw with a 74-year-old headliner, but that minimizes what we experienced. In its way, it was up there with some of the shows of the 70s. 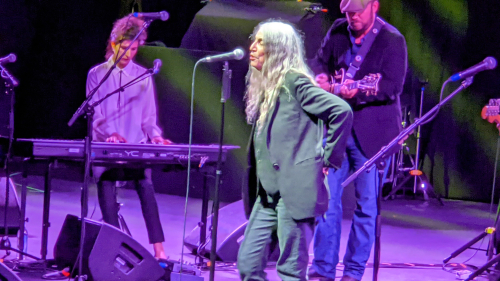 Born on this day in 1952, Earl Slick has had a long career as a top guitarist, playing with everyone from John Lennon and Yoko Ono to the New York Dolls. He's most famous, though, for his work with David Bowie. This is my all-time favorite Bowie song:

Here, Slick and Carlos Alomar talk about the creation of the original riffs for "Stay":

And the original, with the colossal contributions of the D.A.M. rhythm section: Dennis Davis (drums), Carlos Alomar (guitar), and George Murray (bass):

Creeping closer to our month-long vacation, so these music posts are getting shorter. I'm calling on Billie again. A few days ago she played an actual concert in front of actual people. Here it is:

With a month-long vacation coming up, I think it's time to finally finish these weekly visits to my concert-going past. Without comment, here are a few of the artists I haven't yet included in these Music Fridays.

Hüsker Dü, The Stone, The Fillmore, 1985, ?. I think I only saw them twice, but I can't be sure there wasn't a third in there somewhere. One of the handful of my favorite bands of the 1980s. They wrote pop songs as good as The Ramones, but they laid a sonic sludge of Bob Mould's guitar atop the pop, meaning they weren't actually pop at all. Sometimes it felt like Mould never turned down his equipment ... even when he wasn't playing for a moment, there'd be sound. They never made a bad album ... I'm partial to New Day Rising, but Zen Arcade fans are welcome to chime in. Here they are in 1985:

The Ting Tings, HP Pavilion, September 2009. Yet another example of a strong opening act at a Pink concert. Here are their two biggest hits:

music friday: billie eilish, happier than ever: a love letter to los angeles

Another concert film from Billie. In this one, she plays the entire Happier Than Ever album in order, accompanied as usual by FINNEAS and that drummer guy. This time she also adds the L.A. Philharmonic, a children's chorus, and Brazilian guitarist Romero Lubamdo. The setting is the Hollywood Bowl, with no audience. A few animated sequences of Billie driving around town are included, as well, but mostly it's just Billie and her new songs. It's a nice way to introduce yourself to her new album, or to revisit the album if you've already been loving it. The production isn't the technological marvel that was her show from last October, but that just brought the focus onto the music. (The only song to appear on both concerts was "My Future".

Here she is with "Oxytocin", a song near to my heart after last week's surgery.

Can't take it back once it's been set in motion
You know I need you for the oxytocin
If you find it hard to swallow, I can loosen up your collar
'Cause as long as you're still breathing
Don't you even think of leaving

The film is showing on Disney+, which I suppose explains why the f-word was muffled during "Happier Than Ever". So here's that one, with the fucks left in ... just fucking leave me alone, indeed:

on the death of ron bushy

And the drum cover by Sina, which got a big thumbs up from Ron's wife:

George Shearing, Concord, 70s. I guess I revisit this one every once in a while. I think this is the third time I've written about, mostly just cut-and-pasting what I wrote before. The two most important items: I shook his hand, and he was featured in a scene from On the Road:

And Shearing began to rock; a smile broke over his ecstatic face; he began to rock in the piano seat, back and forth, slowly at first, then the beat went up, and he began rocking fast, his left foot jumped with every beat, his neck began to rock crookedly, he brought his face down to the keys, he pushed his hair back, his combed hair dissolved, he began to sweat. The music picked up. The bass-player hunched over and socked it in, faster and faster, it seemed faster and faster, that’s all. Shearing began to play his chords; they rolled out of his piano in great rich showers; you’d think the man wouldn’t have time to line them up. They rolled and rolled like the sea. Folks yelled for him to “Go”. Dean was sweating, the sweat poured down his collar. “There he is! That’s him! Old God! Old God Shearing! Yes! Yes! Yes!” And Shearing was conscious of the madman behind him, he could hear every one of Dean’s gasps and imprecations, he could sense it though he couldn’t see. “That’s right!” Dean said. “Yes!” Shearing smiled; he rocked. Shearing rose from the piano, dripping with sweat; these were his great 1949 days before he became cool and commercial. When he was gone Dean pointed to the empty piano seat. ‘God's empty chair,’ he said.”

Rockpile, Oakland?, 8-12-79. They opened for Blondie, and due respect to the headliners, but Rockpile blew them off the stage. They only recorded one album as Rockpile ... a live album from the same period was released a few decades later ... but in effect, they had several albums released as solo discs, as Dave Edmunds and Nick Lowe. To the point, Edmunds once released "Heart of the City", a Nick Lowe track, simply overdubbing his own vocal atop Lowe's version (which Edmunds had played on). They were a fine band. Other members were Billy Bremmer on guitar and Terry Williams on drums.