happy birthday to the best kitty ever! 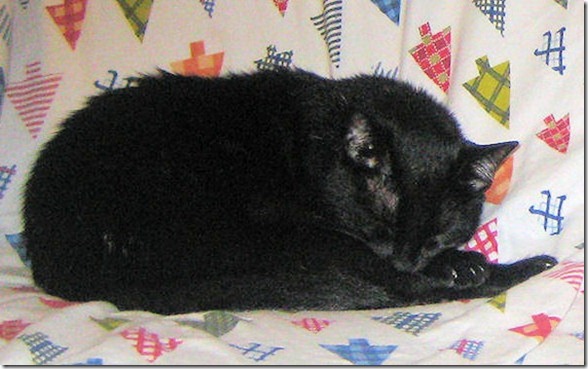 what comes after the terrible twos?

Happy third birthday to the Bengal Sisters, Six and Boomer. I know I should put scare quotes around “Bengal,” but at this point, who really cares? If it quacks like duck etc. Boomer is the prettiest cat we have nowadays … I’m partial to Starbuck, but sometimes she looks like a rat, whereas Boomer always looks the same. I’m not sure there’s much else to Boomer than her looks … she’s not dumb or anything, but outside of liking to sleep with Robin, there’s nothing she does that marks her off from other cats. I might notice her more if she was the only Bengal in the house, since then her love of water and dislike of being held would be more noticeable. But she’s not in the same league in those areas as her sister, so Boomer will just have to accept being the pretty one.

Which leaves us with Six. Robin has a new theory … Six has always had a sensitive stomach, the food we feed the cats is based on a vet’s suggestions for Six, she barfs more than most cats (not hairballs, but actual hurling). I don’t want to overstate this … she doesn’t spend all her days meowing in pain. But she exhibits every characteristic of a person with ADHD, and while in the past we’ve just assumed Six has odd chemistry, Robin now wonders if maybe it’s just that she always has a tummy ache, that she think that’s normal the way Starbuck thinks having three paws is normal, and she copes. Robin thinks this might explain Six’s antsy behavior.

Examples? Six doesn’t sleep all that much … and we’re talking cats here, sometimes I think cats sleep 23 hours a day. She is capable of lying still for awhile, but she is easily distracted … “easily” doesn’t really get it, if she’s in the same room with you and you walk out, she will follow you. She is, in fact, very predictable. I mean, on the one hand, you never know what bizarre thing she’ll do next, but you know that she’ll do something. If you turn on the water in the kitchen or bathroom, she will come running from wherever she is to check out the action. If you turn on the shower, she’ll want to join you. She even has some kind of memory for these things … she knows that I fill the humidifier with water before Robin goes to bed, and she knows she likes to lap up any spillage, so once it gets dark, every time I walk into the bedroom, she follows me, jumps on the bed, stares longingly at the humidifier, and meows. If it’s in the morning and I go to do anything in the bathroom … brush my teeth, take a leak, anything … she will take her place in front of the shower, waiting for me to turn on the water. (I understand that dogs do this stuff all the time … it’s only odd because we’re talking about a cat here, and cats mostly ignore you.)

And, of course, there’s the part where she has two old socks that are “hers,” and when she gets bored of all the other trouble she could be making, she puts one of the socks in her mouth, starts making these guttural sounds, and takes the sock to the nearest human, laying it at their feet. If you spend your day moving between floors, she’ll spend her day moving her socks up and down the stairs and offering them to you as gifts.

Whatever … all anyone really wants to see is pictures, so here’s one I took this morning of the two sisters as they tried to fit into the bathroom sink. That’s Six on the left … Boomer’s the darker, more Bengal-looking one on the right. Note that the faucet is not even turned on … they’re just waiting and hoping, maybe even working as a team (Six trying to turn it on with her nose, Boomer waiting for the water): 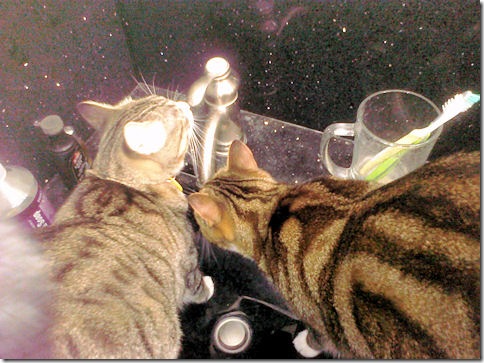 Our cat Starbuck is featured in a photo gallery on SF Gate!

guess whose birthday it is? 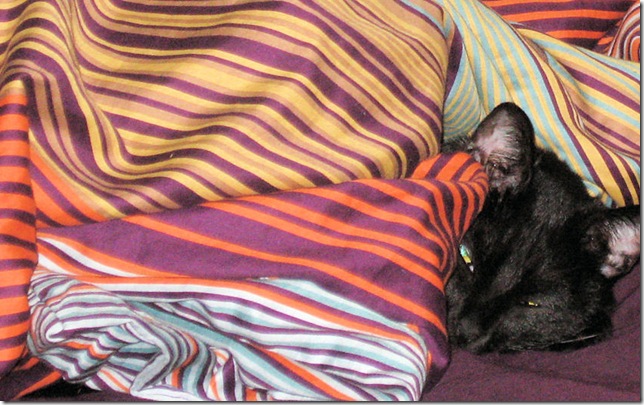 A couple of quickie pictures of the living room, painted and with a better floor: 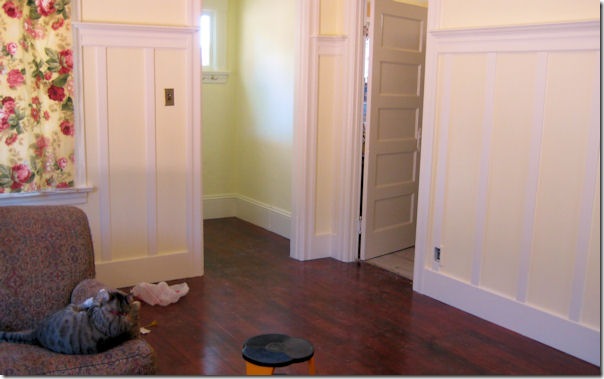 This one isn't really about the living room, but you can see why I'm posting it: 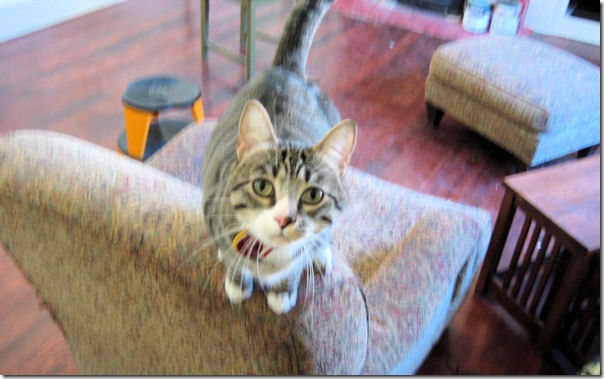 I knew I'd heard this before. Facebook 2009 = Windows Vista 2007. Same group of people crying waa waa waa because something changed.

Once long ago I spent a week or so visiting friends. There was this other guy there ... didn't know him, can't recall his name ... he was an amiable sort, I have no idea why he was staying there. Anyway, every time someone had to go somewhere ... the store or whatever ... he would perk up and announce, "I think I'll go along for the ride." He didn't have anywhere to go ... he just liked to be with everyone else when they went there. Our cat Six reminds me of that guy. It's an offshoot of her case of feline ADD ... anytime someone in the same room gets up and goes somewhere else, she perks up and follows them into the next room. She doesn't do this for her fellow cats, and she doesn't like to go outside. But inside the house, she epitomizes the old saw about curiosity and the cat (although it hasn't killed her yet).

Last night, my 31-year-old daughter participated in her first-ever fantasy baseball draft. She beat me by a few years ... I was 33 when I did my first one.

Robin had to share her first bath in the new tub: 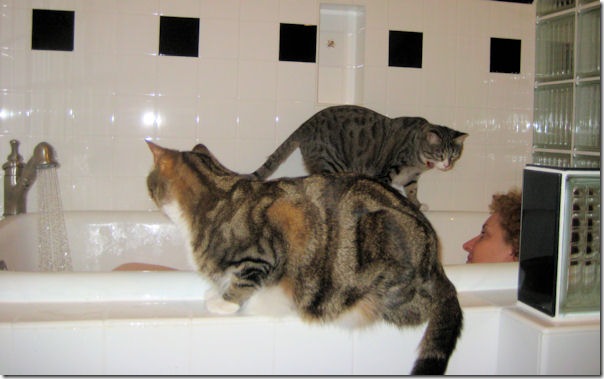 Boomer likes to play with the water: 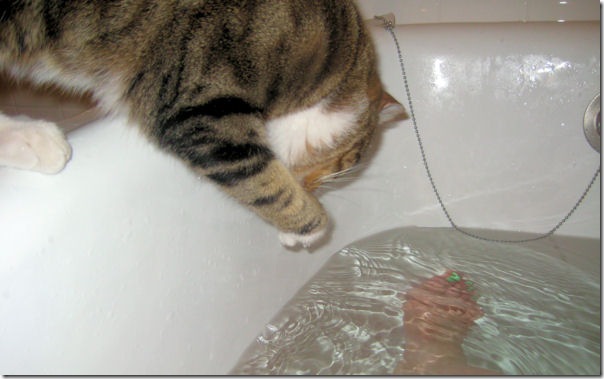 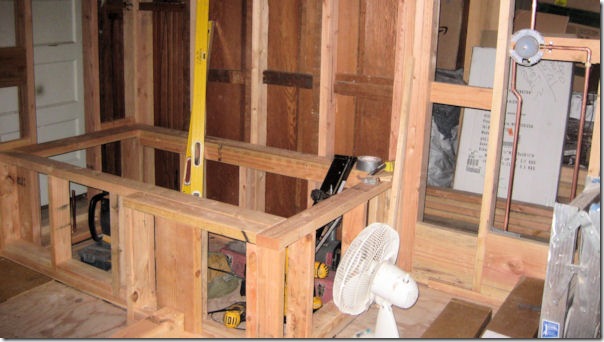 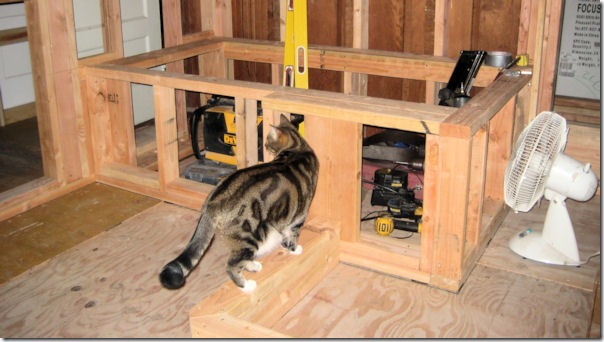 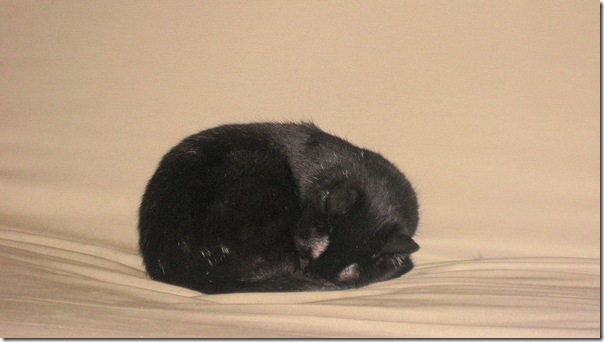 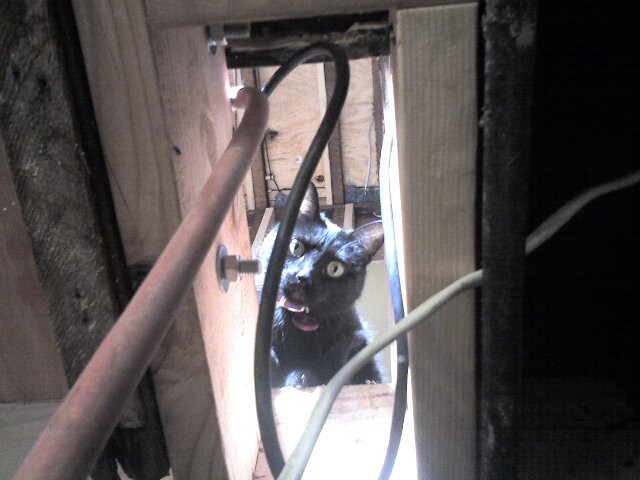 guess it's time for a house update

[Edited to fix a picture. And yes, Six is touching Starbuck.]

We don't really have a living room right now, even though that room isn't being remodeled ... it's holding all of the stuff that used to be in the rooms that have been torn down: 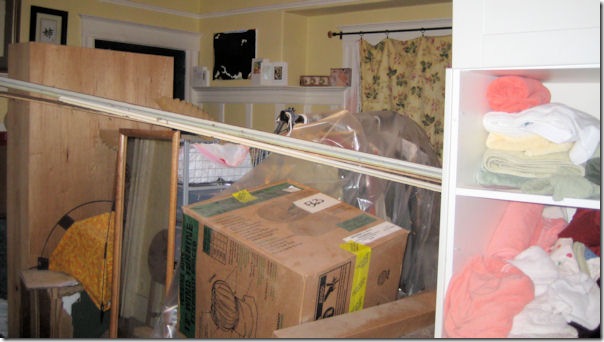 There's finally a handrail for the stairs to the attic: 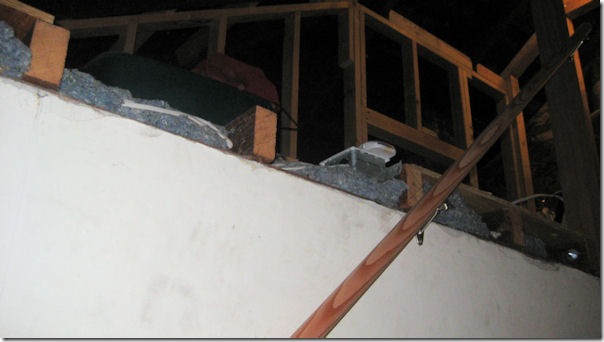 Here is the frame for the walls that will surround the spiral staircase that will go from the sewing room into the basement. The sliding door is the white thing to the right ... all the way to the right is the exit to the kitchen: 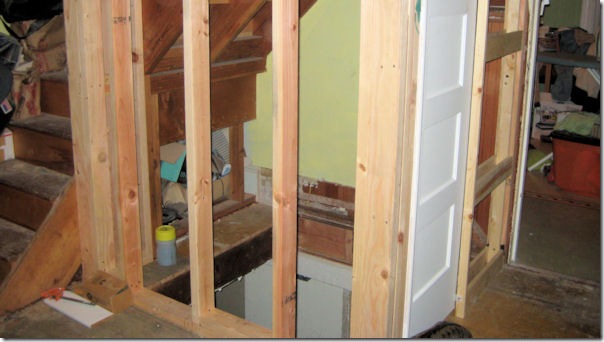 Here is the basement shower/bathtub. The little white thing on the far left is the old sink ... the dark space on the right is where the washer and dryer are: 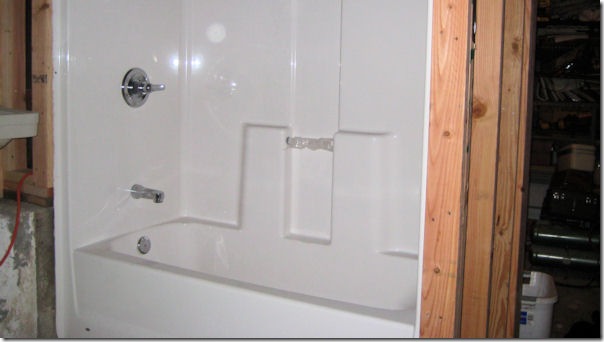 Finally, here is what the old computer/new sewing room looks like these days. The plywood on the left covers what used to be the window. The saw is ... well, the saw: 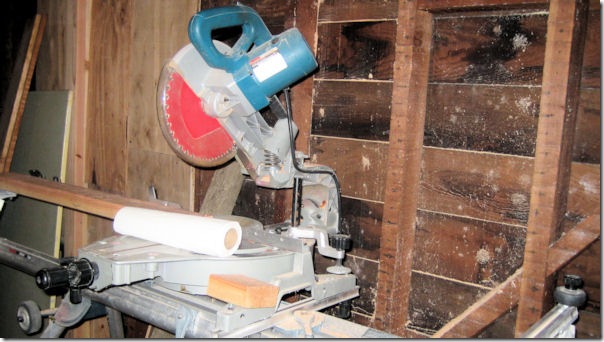 As a bonus for those who've made it this far, here is that rarest of events, Six and Starbuck being nice to each other, or at least not hating each other: 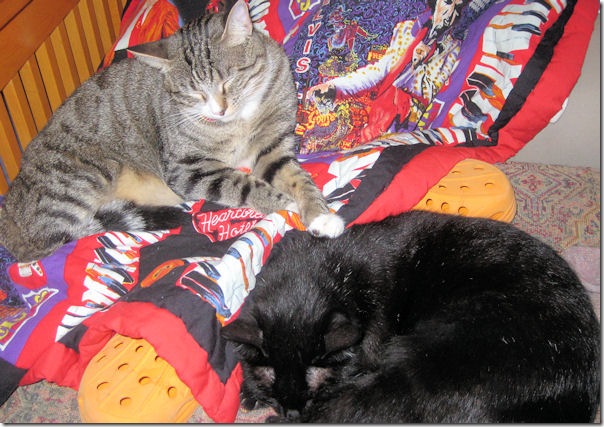