It is foolish and childish, on the face of it, to affiliate ourselves with anything so insignificant and patently contrived and commercially exploitive as a professional sports team, and the amused superiority and icy scorn that the non-fan directs at the sports nut (I know this look -- I know it by heart) is understandable and almost unanswerable. Almost. What is left out of this calculation, it seems to me, is the business of caring -- caring deeply and passionately, really caring -- which is a capacity or an emotion that has almost gone out of our lives. And so it seems possible that we have come to a time when it no longer matters so much what the caring is about, how frail or foolish is the object of that concern, as long as the feeling itself can be saved. Naivete -- the infantile and ignoble joy that sends a grown man or woman to dancing and shouting with joy in the middle of the night over the haphazardous flight of a distant ball -- seems a small price to pay for such a gift. 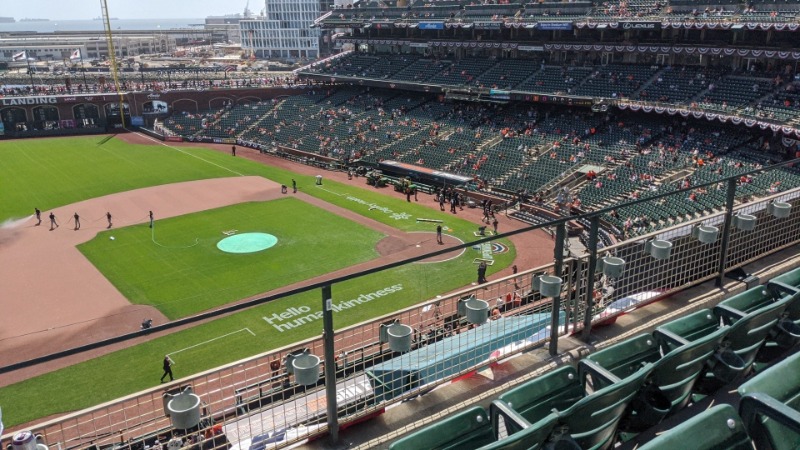 Willie didn't just get a song about him, he appeared on it!

It's arguably the biggest clunker in the history of Bruce lyrics: no one calls it a speed ball, Bruce.

Bruce reportedly liked this quite a bit:

It was Sunday, September 29, 2019. It was the last game of the season for the Giants, who hosted the NL West champion Dodgers (who would lose to the Nationals in the post-season). The game was meaningless ... both teams had finalized their positions for the year. The Giants were done, the Dodgers had more to play. But the ballpark was packed, because it was Bruce Bochy's last game as manager.

There was a heartwarming ceremony after the game, with close to 50 former Giants showing up to give their thanks for Bochy. (One of them, who played for Bochy for two different teams, was current Dodger manager Dave Roberts, who came out for the party wearing his LA cap. Barry Bonds grabbed it off his head and threw it into the outfield.)

The best in-game moment came in the bottom of the 5th. Clayton Kershaw came out to get some work in for the Dodgers, and after retiring the first two batters, Bochy seized the moment, and sent Madison Bumgarner out to pinch-hit in what would be his final appearance as a Giant. Madbum worked the count to 3-2 before lining out to third base, and as he and Kershaw left the field, they both nodded in each other's direction with a tip of the cap.

Fast forward to April 3, 2020. I had tickets to attend my 41st consecutive Opening Day. But by the middle of March, everything shut down for COVID. The opener was postponed until late July, and when play resumed, there were no fans, only cardboard cutouts. By 2021, things had returned to something resembling normal, but I was still staying inside as much as possible, so I didn't attend a single game of that exciting season.

Tomorrow is the 2022 Opening Day, and once again, I have tickets. The Giants will raise their 2021 NL West pennant, the umpire will say "Play ball!", and I'll be at my first baseball game in 2 1/2 years.

It's being called the biggest game in the long, 100+ year rivalry between the Giants and Dodgers. It isn't on TV here, so that's out. I can listen to the game, though. Problem is, the game starts at 3:07 AM Nerja Time. So I'm guessing I'll catch an inning or two when I wake up at night to take a leak. In the meantime, no matter the outcome, this has been a terrific year for the Giants.

Here's something to reminisce, from one of the best moments I have ever attended:

even among the greats, joe morgan stood out

Sam Fels has already said a lot of what I think here: "Joe Morgan, championed by the analytics he hated, passes away at 77".

Maybe Morgan never realized that the analytics he degraded as useless would tell you he was the best second baseman of the modern era by a distance.

That’ll be his legacy.

I'm sure there will be plenty of fine articles ... that's just the first one I saw. Joe is remembered fondly here in the Bay Area. He moved to Oakland when he was 5. I attended Merritt College in Oakland for a semester when I returned to school in the mid-80s. Joe was one of its most illustrious alumni ... memory is probably wrong as usual, but I remember there was a big picture of Morgan on the wall of the library.

Joe Morgan was the greatest second-baseman in my lifetime. Added to his many accomplishments, Giants' fans remember him for his time with the team when he was in his late-30s. In particular, this highlight is shown at the ballpark to this day:

It might be time for a baseball post. I've barely posted about the game this season. Once the beginning was postponed, I called up memories of a few Opening Days of the past, and when the season finally began, I wrote about missing an Opening Day after going to every one since 1980. I didn't think the season should have been played, but ever the hypocrite, I watched the Giants games anyway. And it appears MLB did a decent job keeping people healthy. Some of the new rules are screwy, although I welcome a universal DH. But it doesn't really matter unless they carry the dumb rules over into next season.

But without being able to attend a game (first time since 1977, I think), and with everything goofy, I didn't pay much attention. I like what I've seen of Gabe Kapler and his team of coaches, I have faith in Farhan Zaidi, and the future looks good. But I haven't drawn much inspiration from the team.

And, since I've always been a Giants fan first and a baseball fan second, I'm barely paying attention to the playoffs. I'd like to see the A's do well for my sister Chris, although they are already on the brink of elimination. I don't care about the Astros cheating, so I'd be happy to see Dusty Baker finally win a World Series. Over the years, I've picked up some friends and family who are Dodger fans, and the Dodgers are great again this year ... I really don't want them to win it all, but I expect they will, and I'll actually be happy for those friends and family.

But really, my favorite part of this baseball season comes from a guy who was released and who then retired. Hunter Pence, Forever Giant. The day after his retirement, he showed up on a boat in McCovey Cove to root for the Giants. In 2020, it doesn't get much better than that.

My grandson just turned 8, and he never seems to run out of things to do or to think about. Part of this comes from his parents, both of whom know a lot of different things that they love to pass along to him. So he is already a bigger expert on all sorts of subjects than is his old grandpa. I tried to remember what I was like when I was 8, and what my parents passed along to me. And no wonder I don't know anything. We learned a love of music from our parents, and my dad introduced us to sports simply by being interested in them himself. Once in a while he'd come out on the front lawn to throw a ball around. But that's it. I mean, my mom taught us how to play the piano, but that didn't really stick. I'm not saying I had bad parents, but they were a lot different than my grandson's parents.

I was left to my own devices a lot of the time. One thing I looked forward to every year was the annual release of new rosters for the Negamco baseball game. I'm pretty sure I played this when I was 8.

Each year, you would get rosters with all of the players from the previous year, rated so they would perform in the game as they did in real life. While it seemed pretty complicated, once you got the hang of it, there was nothing to it. The box looked like this: 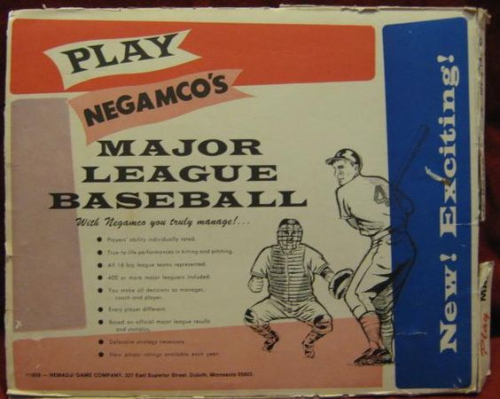 There were classier (i.e. more expensive) games ... among other things, they used dice to determine outcomes. Negamco used a spinner: The box, the spinner, everything was pretty cheap, so after about a week, the spinner dial would get bent and the spinner board would get warped, so you'd get 17 all the time, which kinda destroyed the notion that you were using random variation.

It all seemed so real when I was 8. In 2020, games are a bit more complicated. That game I had, it had very few player ratings. A batter would be rated on how many hits he got, and how many of those hits were home runs. Pitchers were ranked from 1-7. No pitchers experienced fatigue, and there was nothing like lefty-righty matchups. So the results would resemble real life a little bit, but not too close, and of course that #17 would screw things up. Now, simulation games like this are computer games, with every possible detail built into the program. Negamco is a thing of the past. (A few of the better board games are still being made, although as I understand it, many of them have moved to computers.)

I'm sure I've written about radio many times. I could search for relevant posts. But what I'm thinking about today is the category I assigned to Radio. Categories on this blog are there to help you find things. There's a category for Baseball and Bruce Springsteen, for Film and Film Fatales and Geezer Cinema, for Music and Pink and Sleater-Kinney. Recently, I added a category for African-American Directors ... haven't yet turned it into something "official" like my Film Fatales posts, but I tagged a lot of appropriate movies from past entries.

Well, the first time I tagged a post with "Radio" (and thus, the time I invented it as a category for the blog) wasn't as long ago as I might have thought. The post was called "Serial Radio", and it drifted from the Serial podcast to some thoughts about Old Time Radio, with examples. The date was November 13, 2014. Like I say, I know I've talked about radio before, especially FM "Underground" Radio in the 60s. I may have to go back and tag a few posts, make the Radio category relevant. Because after that first post, I wrote one Radio post a year for three years, with the last one being in 2017, when I talked about William Conrad and Gunsmoke.

The other two posts were tied to my life with radio. One came when longtime Bay Area sports announcer Lon Simmons died. Baseball fans develop close, interesting relationships with the people on the radio who describe the action for six months out of the year.

The other Radio post was the most personal of them all: "Al Collins, Grasshopper Pie, and Me". I think it's a good one, so I won't quote it here ... check out the link. Al Collins was a legend, but a good half of that post is about the grasshopper cocktail and grasshopper pies.

What would I write about radio today? The main place I listen to the radio is in the car, and guess what? There's a quarantine, and we never drive anywhere. Spotify playlists are what pass for music radio in 2020, and I will still listen to Giants games when I'm not watching them on TV.

But perhaps what I'm saying is there's a reason why I have so few radio posts. Radio just isn't as important to me any more.