Last night, we ate at a Chinese restaurant. The food was quite delicious. Authentic? What does that mean, anyway? The woman in charge looked Chinese, as did the man we decided was her husband. But she spoke Spanish like a native. (At one point, she complimented me on my own Spanish, saying I didn't have an accent, which I thought was odd since I do have an Andalusian accent. But after I overheard an English customer say "Gracias" with, well, an English accent, I decided she meant I spoke like a native. Which I do, if the native has terrible grammar.)

It was fascinating hearing her speak Spanish. She had the like-a-native accent, but the tone of her voice was, for lack of a better term, "Chinese". If you didn't know Spanish or Chinese, you would assume she was speaking Chinese, because that's what it sounded like. But the accent was Spanish, as were her words.

Meanwhile, the Feria is over. What goes up must come down: 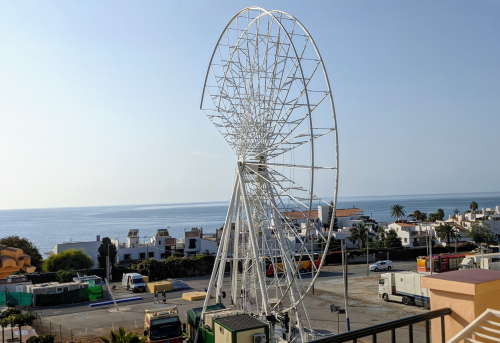