After a two-week break, we return to "My Letterboxd Season Challenge 2019-20", "A 33 week long challenge where the goal each week is to watch a previously unseen feature length film from a specified category." Week 16 is called "The Future Was Then Week":

To quote the late, great Phillip J. Fry, "time makes fools of us all." And never is that more the case for this set of movies we got here. At once considered futuristic, these films now lie in the odd limbo of being both in the future (from the time of its release) AND the past (as of now). Take a look and see where these filmmakers were spot-on about the future, and where they way, way off.

This week's challenge is to watch a previously unseen film set in the "future". My Films with Past Futures list might help.

An awful piece of junk, although I need to cut it a little slack. It was made in 3D, and I was watching it in 2D on my TV. At times, I could see what they were trying to do, not just with the usual stuff jumping at us from the screen, but also by the use of space in ways that likely looked pretty good in 3D. Also, the version on Amazon was reframed from the original 2.35:1, and you could tell. In other words, nothing about how I watched the movie did it any favors.

But still, it sucked, an odd melange of Alien and Road Warrior, which came out not too long before Parasite. There was little attempt to create a world ... just a parasitic being invading people's bodies. It was a post-apocalyptic story, but that fact was rarely mentioned.

Some recognizable names participated. It was the second feature for Demi Moore. It was the third feature directed by Charles Band, who has a bit of a cult following. The cast included Cherie Currie from The Runaways, cheapie legend Cheryl "Rainbeaux" Smith for the scene of a topless woman, and musical legend Vivian Blaine from Guys and Dolls. Best of all was future four-time Oscar winner Stan Winston creating the effects for the parasites.

Finally, a trivia note: on a "Spill Your Guts or Fill Your Guts" segment on James Corden's show last October, Demi Moore said this was the worst movie she'd ever been in.

Claire Denis (White Material) co-wrote and directed this film about four people who live in the same apartment building in Paris. I wouldn't say that Denis tells a story ... it's not that nothing happens, it's that she is interested in other things. As I wrote about White Material, "She doesn't bother too much with clarifying events for the viewer … she does not force-feed us as if we were stupid. It helps to let the movie wash over you, without attempting to impose your own structure. Eventually, the film becomes a whole ... Denis isn't as concerned with 'what happens' in a concrete sense; she wants to explore the inner perspectives of her main character ... It’s very idiosyncratic, but in a way that draws viewers in."

The same could be said for 35 Shots of Rum, which is a bit of an homage to Ozu's Late Spring, in that both concern a father and his young daughter trying to manage their lives together as the woman reaches the age when she could be striking out on her own. Denis takes her time. The relationships of the four people gradually become more clear (besides the father and daughter, there is a middle-aged women who once had an affair with the father and still carries a torch for him, and a young man with an eye on the daughter), but much of the emotional impact advances in subtle ways. They live relatively quiet lives, and what we see is mostly matter of fact. Much of what we learn about the people comes in quiet scenes that are sidelines to what was "really" supposed to happen. In a longish set piece, the four set out together for a concert. They never make it, but they do all end up in a restaurant, where little is said but small glances tell us a lot.

The father and his old flame dance together. The young people talk. Another couple starts to dance. The father switches to dance with his daughter. The young man cuts in. He kisses the daughter ... her reaction is uncertain. The father sees the kiss. He then dances with the restaurant owner as the old flame watches. Finally, they are all on a train back home ... all but the father, who we realize has stayed behind with the owner. None of this is blatant. Denis makes good use of The Commodores' "Nightshift":

The underplaying by the entire cast is perfect for what Denis is doing here. If you think nothing happens in the above scene, then 35 Shots of Rum is probably not for you. If you find the interactions fascinating, though, you will love this movie. #113 on the They Shoot Pictures, Don't They list of the top 1000 films of the 21st century. (Here is a letterboxd list of Film Fatales movies.)

The Fillmore West, 51 years ago today. Opening was Spirit, who had just released their second album, which included this, their greatest hit:

Blood, Sweat & Tears were also touring behind their second album, but they might as well have been a new group with a debut record. After their classic Child Is Father to the Man, Al Kooper and two others left the group. The most important replacement was singer David Clayton-Thomas, who wrote "Spinning Wheel" among others. Some of us lost interest after Kooper left, but with Clayton-Thomas, BS&T became one of the biggest hit makers around.

The Grateful Dead also had two albums out, the most recent of which, Anthem of the Sun, was more psychedelic than their debut. (Their third album, Aoxomoxoa, took this several steps further.) A couple of weeks after this gig, they appeared on Hugh Hefner's TV series Playboy After Dark. We'll let Bill Kreutzmann tell the story:

My daughter has begun a new enterprise that is fascinating to me, for its combination of modern-day smarts and an almost 60s approach to the land. It's called Creative Nourishment. As she says on the website, "As a design guide, I am here to support you in defining your ideal landscape and creating a step-by-step action plan towards your long-terms goals. I look forward to Co-Creating and guiding you towards your vision of how you spend time in your space! I use a Permaculture design framework as well as Rescape California principles to create a balance between beauty and function."

In many ways, this project has been a long time coming ... she has worked with Permaculture forever. Check it out! 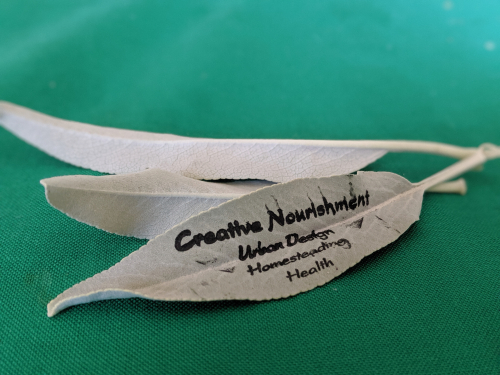