This is the latest film I have watched in "My Letterboxd Season Challenge 2019-20", "A 33 week long challenge where the goal each week is to watch a previously unseen feature length film from a specified category." Week 12 is called "Classic Performers: Ingrid Bergman":

A major name in both American and European cinema, Ingrid Bergman is often considered one of the greatest performers to have ever graced the screen. From notable American classics like Casablanca and Spellbound to her work with Roberto Rossellini in Italian neorealist mainstays such as Stromboli and Europa '51, Bergman filled the screen with emotion that is hard to be matched.

This week's challenge is to watch a previously unseen film starring Ingrid Bergman.

In 1936, Molander and Bergman worked together on the original Intermezzo. Two years later, at 23, Bergman was in A Woman's Face, a silly bit of nonsense, from a French play, about a woman with a scarred face who changes from a bad person to a good one when she receives an operation that turns her face into Ingrid Bergman's. You have to admire the dedication it took to make Ingrid Bergman ugly for a good portion of the picture. 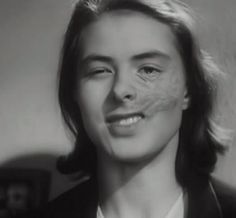 Bergman does an excellent job of turning her ugliness (she was burned in a fire as a child) outward into a life of crime in a blackmail ring. She also does what she can to make her transition from bad to good seem believable ... it's almost matter-of-fact in the script, but Bergman makes the change gradual and she connects emotionally with the audience. It's also fun to see how Bergman is allowed to be physically big ... at times she seems like the tallest person in the room, and even when her face is disfigured, she commands the screen. It's interesting how the "ugly" woman is always trying to hide her face but uses her body to dominate.

Remade in English a few years later with Joan Crawford.