My wife is retiring. She might already be retired ... it's not clear to me. Part of me thinks her last day is Sunday, but of course she doesn't work on Sundays. So then I think her last day is today, Friday. But yesterday she went into the office and returned all of the equipment she had used over the years in order to work mostly from home. When she got back, she said she was retired, because she can no longer work from home, and she's not going in tomorrow, so it's a de facto retirement. As if to emphasize this, she went into the bedroom and unplugged her alarm clock. Said she would never use it again.

She spent 15 years working for Kaiser. They had a party for her. Lots of people told her how highly they regarded her. One of her best qualities is that while she's not exactly modest, she doesn't think she is anything special. If you point out to her that she is a good person, she replies that she's just like everyone else. If you tell her that not everyone does the right thing as often as she does, she deflects the praise. Still, I was glad to know that her long-time workmates forced her to listen to their praise. When she came home, she tried on some of the stuff they'd given her: 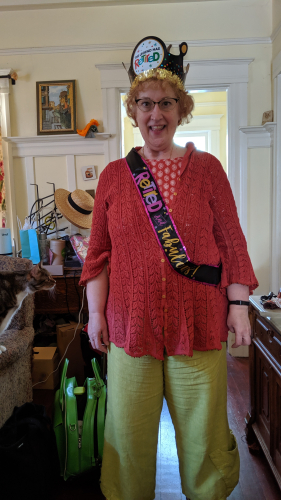 I walked off my factory job in August of 1984, 35 years ago. Robin immediately went out and got a job, then went back to school and got an MBA while she kept working. She has supported the family for the last 35 years, and you could say that she'll be supporting it for the next 35 years, too, since she made sure to put money aside for retirement. Understand, she doesn't like work. She's not someone like my father, who worked all his life and died within a year of retiring. She doesn't like work, never has, but for 35 years she supported our family so that I could goof off. I still can't believe it.

So here comes our golden years.

So happy for her but also for you both. May this be the start of a welcome phase of well earned love and relaxation. You’ve both earned it.

This morning she got up, had her coffee, and then, instead of going into the living room and setting up her work computer, she went back to bed, turned on an audio book, and started knitting. The New Era. (Addendum: I think she's gone back to sleep.)