We attended last night's MLS season opener for the San Jose Earthquakes. Last season the team was just awful, winning only four games all year. During the off-season, their primary move was to hire the respected Argentinian coach Matías Almeyda, who has worked on three occasions with teams fallen on bad times (River Plate, Banfield, and Chivas) and took part in a turnaround. He would seem to be the perfect new manager for the Quakes, so much so that it was surprising he even came here at all.

My nephew is the most knowledgeable person in our family when it comes to soccer. He's the right age, growing up as the sport was blossoming in the States ... as a little tyke, he attended the very first Major League Soccer game ... and, unlike most people, has managed to turn a passion into a full-time job, currently with Toronto in MLS. He often suggests to me that managers aren't nearly as important as we think, that it's the players that matter (I'm simplifying here). I decided this meant the 2019 Quakes might make an interesting study of that concept. They were a bad team, and while they mix-and-matched a few players, they didn't sign any big stars outside of Almeyda. If managers lack importance, the Quakes aren't likely to be revived.

Hard to say after one game if the revival is taking place. MLS rules (and the reluctance of the San Jose front office to spend lots of money) mean Almeyda probably hasn't been given the kind of money he could use to rebuild the roster, although that is mere supposition on my part. Last night, the Quakes' play looked more positive, and a goal in the 11th minute gave fans some hope, but eventually, San Jose lost, 2-1. Their defense was erratic, and while the offense had plenty of possession, they rarely seemed like they were on the verge of scoring.

Almeyda has said from the beginning that recovering from a four-win season takes time, and he found some positives in the defeat. But mostly, the game reminded us just how far the team has to go. And outside of the never-give-up spirit the team showed (not something we saw too often last year), I can only say of Almeyda's influence so far that the Earthquakes will probably win more than four games in 2019. Here are some highlights, including a look at Matías, who if nothing else is the best-looking coach in the league:

And here is the view from our seats: 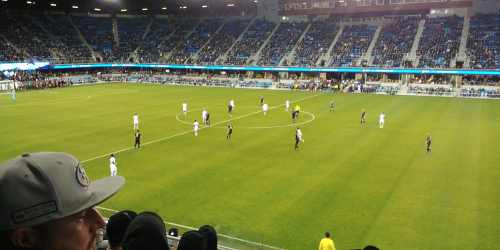