ron dellums and me

I woke up in the middle of the night to pee ... I'm 65, I do that several times every night. Being a modern guy, I checked Twitter while I was up, and saw that my cousin had tweeted that Ron Dellums had died. He noted that there was no confirmation anywhere but social media ... I took a few minutes to check for myself, saw nothing to corroborate the news, went back to bed, and turned the local news station on my radio. I fell back to sleep without hearing any more about the Congressman.

Over the past several years, I have extremely vivid dreams, several a night (waking up to pee means I go back to sleep and another dream kicks in). I usually don't know I'm dreaming until the last seconds when I wake up. In this dream, I was at a ballgame and saw the actor Erik Todd Dellums, Ron's son. I asked him if the news about his father was true, and Erik told me a long story about how his dad was fine, these stories get started, you know how it is. I was relieved, and headed back home. At that moment, I woke up to the radio reporting that Ron Dellums had indeed passed away.

In 1969, I was living in Antioch, California, a suburb-in-name-only of San Francisco that was close as the crow flies to the big city, but far away in any useful description. I had spent my entire life in this factory town, and until my senior year of high school, there were no black people in Antioch. If you were black, you lived in Pittsburg, right next to Antioch. My parents were politically moderate. During the People's Park battles of 1969, KQED, the local PBS (then NET) station, televised some Berkeley City Council meetings. There was one councilman in particular who got my attention. As I recall, he spoke passionately on behalf of the people being attacked by the police. My parents thought he was dreadful, which only made me like him more. He was a 33-year-old ex-Marine named Ron Dellums.

Dedication of a sculpture

It would have been in the late 70s/early 80s. A friend who was a sculptor had some work installed at the Macarthur BART station. At the unveiling, Ron Dellums, by then our representative in the House, came to say a few words. I had moved to Berkeley in 1974, and was proud to be able to vote for Ron every two years. I brought my movie camera to that event to take some footage, and when I saw the Congressman, I went over to express thanks for the work he was doing in Washington. Looking like a random guy with a movie camera didn't appeal to the Secret Service guys, who closed in on me immediately, which freaked me out enough that I still remember the incident. As I recall, Ron instructed them to let me through so I could shake his hand.

It was 1988. I was in my first semester as a grad student at Cal. Congressman Dellums was visiting campus ... this was during the Bush-Dukakis presidential campaign. I went to take a leak ... Old Blues will know where I mean, the bathroom off of Lower Sproul by the bookstore. I don't remember who entered first, but at some point, I realized that standing at a nearby urinal was Ron Dellums. Ron, I said, I'm so proud to have you representing me, and I respect your opinions. Tell me why I should vote for Dukakis.

Ron, an admitted Socialist in the Democratic Party, began a conversation littered with good cussing ... no big deal, except I remember being naive enough to think, hey, the Congressman says fuck! His argument was pretty basic, Dukakis wasn't any good, but he was better than Bush, we gotta get the Republicans out of the White House. (Two years later, Dellums was one of 54 congress members who sued Bush's actions building the military presence in the Middle East, a case that became known as Dellums v. Bush.) We left the restroom together and were joined by his Secret Service men. It happened that Ron and I were headed in the same direction, so we walked up campus together as he made the case for Dukakis. He could be quite persuasive, although I was, then and now, pigheaded and so I never was convinced to vote for Dukakis. But it was a memorable few minutes for me, as the Congressman took some time to talk to a friendly constituent about an important issue.

There was this guy, a friend of a friend, who would come by our house and visit for a bit, usually looking for a couple of bucks. He was a raggedy fellow, but friendly, and we would talk for awhile. His story, as he told it, was that Ron Dellums was his father. He said he was told this by his mother, and that everyone "knew" this was true because he looked so much like Ron. Understand that Ron Dellums was a handsome man who got more distinguished looking the older he got, and that my friend, god love him, was not the handsomest man alive. Nor did he look a bit like Ron Dellums. But he was convinced that one day, Ron would admit the connection, and he would be set for life. While it was kind of loony, I loved the idea that being Ron Dellums' son was something to aspire to.

Those are my anecdotes. Dellums remained in the House from 1971 to 1998 ... every two years, we'd vote him back in. There was something called The Dellums Machine ... don't know if it amounted to anything, but during elections, we'd always get a flier on the front door on election days with Ron's endorsements. After he left the House, he was replaced by Barbara Lee, who is still going strong, having been our representative for the last 20 years. It's nice to have a representative doing you proud, and here in Berkeley, that's been the case in the House for almost 40 years. Dellums was around so long, he was able to take advantage of seniority rules to get some important roles, even serving for a while as Chair of the House Armed Services Committee. He went into lobbying, which I admit was disappointing, and later became Mayor of Oakland, which by all accounts wasn't the highlight of his career. To me, he'll always be the first person I was glad to vote for, and the only politician who would spend time talking to a guy he met at a urinal. 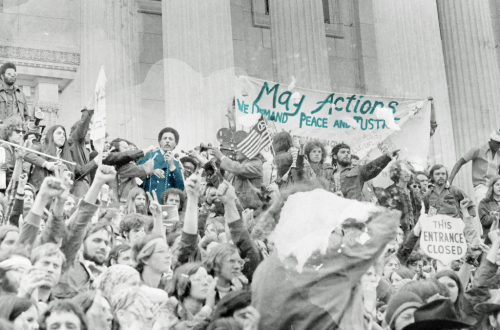 he was the first congresscritter I ever voted for. I'm feeling I"m not sure what I'm feeling. Once upon a time, a friend told me that Dellums was the least productive member of the house and I should look at voting for someone else. But, I said, if I were on the floor of the house, every time I voted I would vote the same way he voted and that was worth more to me than almost anything else.

there's a place inside me that's feeling a bit empty right now.

Funny thing is, Dellums actually did get stuff done once in a while ... maybe not as often as a centrist toady, but sometimes. Good enough for me.