I once listed L'Avventura as my 17th-favorite movie of all time. I did not think as highly of L'Eclisse, and didn't think much at all of Red Desert. Blow-Up was OK, and it was different than the famous trilogy, but I would never put it on a list of favorites. So I ask myself whenever I think about Antonioni, what exactly do I think makes L'Avventura better than the rest? And I don't think I've ever come up with a proper answer. The closest I've come is when I wrote, "L’Avventura’s greatness lies in part in the way the emptiness is ultimate rather than complete. Claudia’s journey takes us from a place of hope to one of pitiful acceptance, and that journey is key to L’Avventura. In the other films in the trilogy, the emptiness is there from the start; it is complete, and there is no journey."

Zabriskie Point looks like L'Avventura, once you get past the use of color. When Mark and Daria wander around the desert, they are photographed as mere specks in the vastness of nature, which is very much like the earlier film. 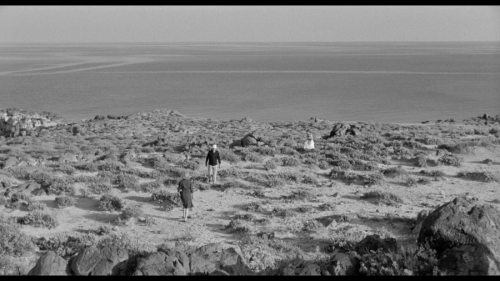 So yes, Zabriskie Point is lovely to look at. But really, so what? There is no real attempt in the film to provide characterizations for anyone, no attempt at a coherent plot, no attempt, for that matter, at making any coherent points at all. The movie wanders around, and then one character dies and the other character imagines things blowing up. That's it. Antonioni shows contempt for America, contempt for young people in America, contempt for political people in America ... yep, he sure does hate America. But he never offers any reason for this hatred.

And hatred is too emotional a word, for Zabriskie Point is as drained of emotion as the desert is of water.

Antonioni doesn't even bother to cast actors in the main roles who can convey depth. The legend is that a casting director spotted the non-actor Mark Frechette and told Antonioni, "He's 20 and he hates", which was good enough for the Maestro. Daria Halprin has had an interesting life, but she's no actress, although she at least offers something approaching screen presence, unlike her co-star. (She did end up in a comments thread about the movie Revolution, in which she played herself. It's one of my all-time favorite comments threads, because the star of Revolution, Louise "Today" Malone", turned up!)

Antonioni made Zabriskie Point because an American studio was chasing the youth market, and hoped the director of Blow-Up could deliver. He didn't. At one point, Mark states that while he is ready to die for the revolution, he doesn't intend to die of boredom. He'll want to avoid Zabriskie Point, in that case. (In fairness, lots of people would say the same thing about L'Avventura.) David Thomson, who thinks it's a bad movie but who also loves the movie, thinks the ending "could stand alone -- it should -- as a magnificent short film", later adding, "we can believe that Antonioni could hardly speak or direct a word of English. But baby, when he blows the house up, you get the message. The film was a commercial disaster that began the ruin of MGM - truly, art is a wonderful thing." #958 on the They Shoot Pictures, Don't They list of the top 1000 films of all time. 5/10.

And a famous appearance by Halprin and Frechette on U.S. television: