I watched this a couple of years ago with our ten-year-old grandson, who was kinda bored ... he’s the Star Wars/Lego type. This time, it was our four-year-old grandson, going to a movie theater for the first time. His parents make sure he’s not inundated with media, and Totoro seemed like a nice first trip to the movies.

Here’s what I wrote earlier:

We watched the Disney English-language dub, which I hadn’t heard before. I didn’t really recognize any of the voices, including the stunt-casting of Dakota and Elle Fanning as sisters. It was fine, in any event ... I think I only notice English dubs when they are terrible. I liked the movie as much as ever, even with the semi-negative vibes in the room. I think Princess Mononoke is my favorite Miyazaki film, but to be honest, they all kind of blend together in my mind as the years pass, so I couldn’t really explain my preference. My fondest memories are of Spirited Away, probably because I love the soot thingies. Even the lesser movies are enjoyable, though, and often quite loony. #235 on the They Shoot Pictures, Don’t They list of the top 1000 films of all time. 9/10.

That earlier viewing was at home, so one of the biggest differences this time around was being in a crowd, with plenty of parents with their kids. I was reminded of the first time I watched a Studio Ghibli movie in a theater, Ponyo:

The best part about watching this in the theater ... was listening to the kids in the audience. They were enjoying the movie very much, right from the beginning, when the Studio Ghibli logo came on and a kid sitting behind me said to his parent, “it’s Totoro!” You see, I had forgotten Miyazaki makes movies for kids. I assume they’re more like Fantasia, movies for acid heads to enjoy while tripping.

This time again, there were Totoro fans in the audience, and of course Totoro made a lot more appearances this time. It was impossible to watch the movie without trying to imagine what was going on inside my grandson’s head. There were a couple of times when he was scared, but he seemed to enjoy himself, and afterwards, I bought him a cushy Totoro toy: 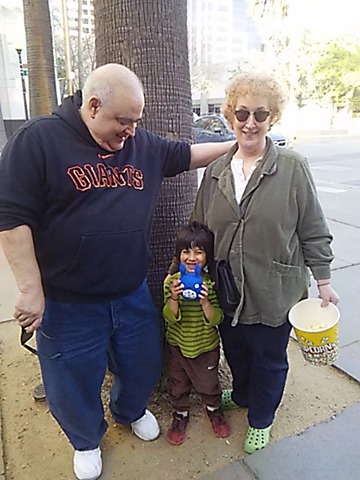 I’m always up for watching My Neighbor Totoro, but honestly, the best part of this was the experience of going with Félix.