music friday: 50 years ago today at the fillmore 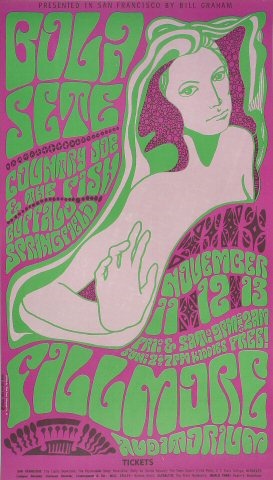 On November 11, 1966, Bill Graham put on the first of three shows headlined by the Brazilian musician Bola Sete. The opening acts were Country Joe and the Fish, and Buffalo Springfield.

Buffalo Springfield had been formed earlier in the year, and featured Neil Young and Stephen Stills. These were their first shows at the Fillmore, and took place around the time their first album was released. Here’s a song from that first album, recorded a couple of months before the concerts: “Flying on the Ground Is Wrong”, written by Young and sung by Richie Furay.

Country Joe and the Fish were a Berkeley band who had yet to sign with a record label. They had self-released two EPs which were popular on the “underground” radio stations. Here is “Section 43” from one of those EPs ... it was re-recorded for their debut album, which came out the next year:

Headliner Bola Sete ... well, first, give it up for Bill Graham, who in those early months of the Fillmore would book shows like this, with a country-rock band from LA, a psychedelic band from Berkeley, and a jazz guitarist from Brazil. Sete was 43 years old at the time of this concert. He had at least a dozen albums going back to 1957, along with a few when he played with Vince Guaraldi. Here he is with “Baion Blues”, released in 1966:

Good stuff! I know the first two, of course, but I'm not sure I'd ever heard any of these tracks.

I first knew "Section 43" from the EP in the link above, played on FM radio. Their first album was a mainstay for me, back when you only had a few albums and the ones you had got played over and over again. My first attempts at getting high were often accompanied by this track, along with "Bass Strings".

Now I have to listen to the whole album!

I wonder how it holds up. It's hard for me to clear the awful nostalgia from my ears enough to really hear it. I'd say it's the equal or more to many of the other area bands' first albums. There's the "hit", "Not So Sweet Martha Lorraine", and the aforementioned psychedelic classics, "Section 43" and "Bass Strings". There's stuff that sounds v.60s ... I mean, one song is Country Joe's paean to Grace Slick. There are other albums from that time I prefer more now, but I had this one before I had those others. It's far and away CJ Fish's best album.