Home Archives Profile
music friday: the fillmore, 50 years ago today
the night of

al collins, grasshopper pie, and me

I want to call Al “Jazzbo” Collins a local legend, except “local” is hard to define. His long radio career included extended stays in New York, San Francisco, Los Angeles, Pittsburgh, and many smaller areas, most in the greater San Francisco Bay Area. Besides radio, he was briefly a host for The Tonight Show when they were looking for a new person (they eventually decided on Jack Paar). He had a morning TV show in San Francisco in the early-60s. He even cut a few records, hip fairy tales they were called:

His radio shows, no matter the station, were always broadcast from “The Purple Grotto”, several floors underground. His theme song was “Blues in Hoss Flat” by Count Basie:

Starting in 1959, he was on KSFO in San Francisco. They (and he) played my parents’ kind of music, and hey, I was only six. It wasn’t exactly a “normal” show:

His shtick with the Mexican banditos from The Treasure of the Sierra Madre, well, I don’t know how it started. But if you were a guest on his show, you had to get “majuberized”, which meant you had to recite the quote from the movie. (Later in his career, he had a call-in talk show, and people would call solely to get majuberized.)

Then he added that morning TV show, and it was a joy, even for a tyke. Memories are tricky things, but among the stuff he did, I can remember this little toy where you put a coin in it and a little hand came out and grabbed the coin and pulled it inside. Jazzbo loved crepes, and he was always having a chef making crepes on live TV.

Eventually in, I think it was the late-70s, he ended up with a call-in talk show. The channel, KGO, had nothing but talk shows, and reached all along the West Coast at night. Once in awhile, someone would call in berating Jazzbo for not talking about politics, but he would kindly explain that his show was a little different.

It is here where we finally get to the grasshopper pie. As always, Jazzbo loved to talk about his favorite foods, and he frequently spoke of how much he loved grasshopper pie. He’d talk about the recipe ... you started with grasshoppers ... I can’t really remember it very well, and I had never heard of grasshopper pie, but he got my attention as I drove home from the factory after midnight.

Eventually, I figured out that the pie was based on a cocktail my mom used to make called “grasshoppers”. I thought for a long time that grasshoppers were fairly traditional ... I mean, my mom made pitchers at home ... but apparently it’s one of those remnants of post-war American culture, and they went out of fashion. I haven’t had a grasshopper since I was old enough to drink legally (admittedly, I don’t go to bars just looking for the cocktail). But once, 30+ years ago, I was on a jury, and the city paid for our lunch. We went to some fancy restaurant in Oakland, and on the dessert menu was Grasshopper Pie. I had to order it, see what it tasted like, and yum!

Here is a video showing how to make “real” grasshopper pie:

And here’s a bartender making a cocktail:

My mom made hers in a blender.

So now you know my personal history with grasshopper pie. It turns out there’s a restaurant in Oakland that has grasshopper pie on the dessert menu, so my wife and I went there for dinner. The restaurant is called Homeroom, and they pretty much only serve macaroni and cheese. We both got the “classic mac”, and it was delicious (also v.good microwaved the next day ... the servings are huge, you can’t finish one). Then I ordered grasshopper pie for dessert: 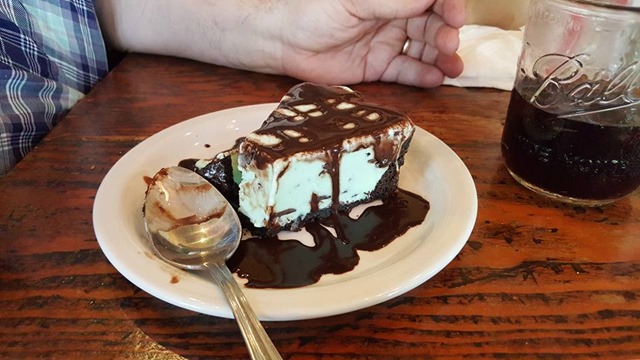 It was yummy yummy. It wasn’t “real” grasshopper pie, and I knew in advance ... in place of crème de menthe and crème de cacao, they used chocolate mint ice cream, and apparently, this is standard nowadays. It tasted like a really good Baskin-Robbins cake. The taste was like a real grasshopper if it didn’t have alcohol.

Of course, I had to tell our waitress all of this. I wasn’t surprised she knew nothing of the cocktail, but I admit I felt very old when she said she had never heard of crème de menthe. Even my wife, whose parents didn’t drink like mine, had crème de menthe on the shelf when she was a kid, to pour on ice cream.

Anyway, I’m satisfied now. I hope Jazzbo heard about it in the Purple Grotto.

Here’s a link to an article about the cocktail:

It’s Not Easy Being Green: The Weird History of The Grasshopper

Every dorm room in my university days had one bottle of green creme de menthe in its arsenal. I happened to have it in green and white as well as the creme de cacao and a bottle of banana liqueur to boot.

You guys had fun!

My mom made grasshopper pie a couple of times when we were young. Always loved it.

It's funny, I didn't even know grasshopper pie existed when I was a kid. I don't recall pouring it on ice cream, either, although that might just be my memory failing me. But I definitely remember those blenders full of the cocktail.