You think back to how you were influenced. My two grandmothers, one from Spain, the other from Kentucky, each passed along different things. Same with my mom and dad.

What we forget is that our siblings, particularly our older ones, exert a strong influence as well.

My brother Geoff is six years older than me. This meant that when he was in his teens, listening to popular music, I was a little squirt. And sure, I could turn on the radio. But my brother’s record collection had a huge impact on my own taste. OK, I never did come around on Bobby Rydell. But Geoff’s 45s couldn’t be beat.

Six years is a big break, and I’m sure I bugged the shit out of him ... imagine him being, say, 15 years old, and his 9-year-old brother wants to tag along. Sometimes I did, sometimes I didn’t, but in retrospect, I don’t remember those years in a negative way at all. Without ever seeming to do it, he kept an eye on me. And that couldn’t have been easy ... I’m the kid who was already on “nerve medicine” as a youngster.

Once he got older and moved out of the house, he always welcomed me to visit, in San Francisco and later in Mill Valley. He took me to my first concert, and to my first rock concert. I think he’s the first person to get me high on hashish, although my memory’s a little foggy on that one (rightly so).

When he came back from Vietnam, there I was, just out of high school, with no ambition other than to be a hippie. I had, shall we say, few prospects. He invited me to move in with him, which I did for almost a year. He introduced me to the world outside the house I grew up in, at a time when he must have been working through a lot of things, himself. And he gave me a chance to fulfill my ambition for a short while, for which I can never repay him.

You know, when I was a kid, I felt I had to live up to Geoff’s standards. He was smart, so I had to be smart. He skipped a grade, I skipped a grade. It’s the plight of being younger. You outgrow that stuff.

Except now we’re geezers, and damn, he is still someone to live up to. There was the time he spent working a suicide prevention hotline, and I thought, thank goodness for people like him, knowing that I was always more likely to call such a place than to work at one. Hell, he’s a crossing guard now, and you know how lovable crossing guards are! 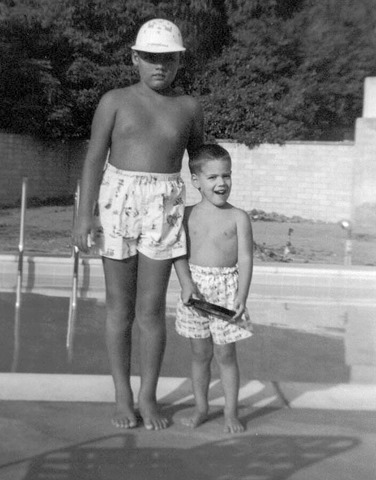 Pretty darn good post and trip down memory lane..... and as it goes, you took me to my first rock concert, and the music I listen to has a lot to do with the music that played in our house when I was growing up. I'm much more likely, for instance, to listen to the 60s station on my satellite radio than I am the 80s.

Beautifully written! Geoff was a big influence on us all. He took care of me when I got the stomach flu in the middle of the night on Christmas Eve when I was 10. He bought me my first album, The Byrds. He would babysit us and we'd pretend to be the Beatles while he played his records on his Hi-Fi stereo that he moved into the living room for the evening. Now the patriarch of our family, I love him more than ever. Happy Birthday, Geoff!