Since I don’t know who the audience is for this blog, I don’t know how much I have to say to provide context. Say nothing, and some people will be left behind. Say too much, and I’ve bored the readers. In this case, I’ll err on the side of saying too much.

Georges Franju was a Frenchman who, with Henri Langlois, started the Cinémathèque Française in 1936. It held (and holds) one of largest archives of films and film-related material in the world. Their post-war screenings were attended by many of the future stars of the French New Wave. Franju went on to make documentary films before moving on to fiction films, of which Eyes Without a Face was the second.

By the time this film made it to the U.S., it was treated like a typical drive-in horror flick. A couple of scenes were edited, the title was changed to the ridiculous The Horror Chamber of Dr. Faustus (there is no chamber or Dr. Faustus in the movie), the French dialogue was dubbed into English, and it was stuck on a double-bill with the immortal movie The Manster (HALF MAN, HALF MONSTER!). I don’t remember The Manster, but I seem to recall seeing The Horror Chamber of Dr. Faustus on Creature Features when I was a kid. That I am not sure of this last suggests the movie didn’t make much of an impression, if I did see it.

Which brings us to Eyes Without a Face. The concept isn’t completely original … scientist’s daughter has her face disfigured, scientist tries to graft a new face onto the old one … at some basic level, I suppose it is a horror film, although the buildup is so slow I’m not surprised I can’t remember if I saw it. There are a couple of faded stars to tart things up … Pierre Brasseur, who was in Children of Paradise in 1945, plays the scientist, while Alida Valli, the female lead in The Third Man in 1949, plays his assistant. (In fairness, Valli had been in plenty of movies of note in the 1950s.) The scientist and his assistant kill young women, looking for a match for the disfigured daughter, and again, this isn’t exactly a new idea in horror.

So why is Eyes Without a Face considered a classic? Partly, it’s the perfectly controlled way Franju gradually lets the audience into the scenario. At first, the scientist seems like a somewhat arrogant man who is still mourning the loss of family members. But as the film progresses, we realize that the doctor will stop at nothing to achieve his aim of fixing his daughter’s face, even after she expresses her desire to just die. Ultimately, he is uninterested in his daughter. He only wants to create a new method of grafting. Thus, the film is a commentary on patriarchy, where women are mere symbols for what men want to accomplish. It’s also a warning about placing too much importance on reason … the rational scientist never seems to understand what he is doing to his daughter, or why she would want it to end.

But what really lifts the film is Edith Scob, who plays the daughter. Scob is aided by the mask she wears to cover her mangled face … it makes it hard for the actress to emote, and more props to her for using her eyes and her body to express emotions. But it’s the actual look of the mask that will haunt you long after you’ve seen the film. 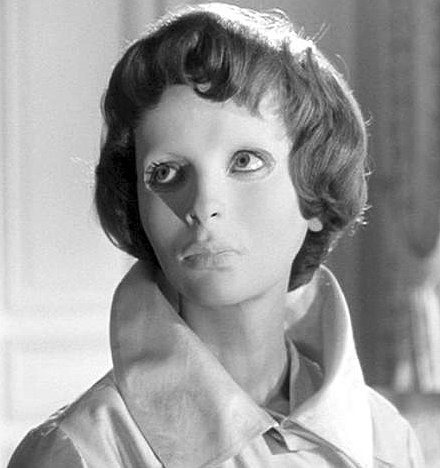 I’m not sure she’s even wearing a mask … in an interview included on the disc, she talks about sitting in makeup for long periods. There are times when the mask is taken off or put back on, but that could be camera trickery. Whatever … what matters is that the mask simultaneously looks like a mask (i.e. “fake”) and like a real face. It’s exquisitely done … her face looks oddly flawless.

Franju happily, consciously, messes with our notions of the possibilities of art in genre work (which might have been more vital in 1960, I suppose). Eyes Without a Face is an ambitious film. It’s better than the average horror film, there’s a lot going on, there is plenty of interesting subtext. All of which, to be honest, makes me enjoy thinking about it more than I enjoyed actually watching it. #338 on the They Shoot Pictures, Don’t They list of the top 1000 films of all time. 8/10. For a companion piece, try something by Cocteau, maybe Testament of Orpheus. Or John Woo’s Face/Off.