if candlestick park had been a fish, you would have thrown it back

Tuesday night, Geoff, Nikki and I attended a soccer match between the USA Men’s National Team and Azerbaijan. It was held at Candlestick Park, which will thankfully be destroyed in the near future. Here’s a photo of us at the match: 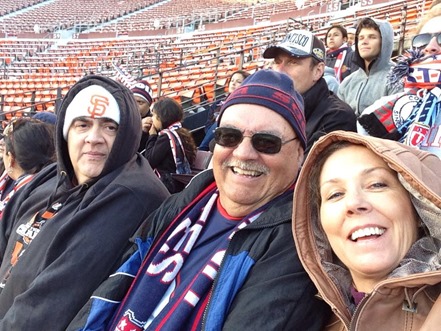 (Note the cold-weather gear for a match in late May.)

For this week’s Thursday, I take us back almost fifteen years, to Candlestick Park on September 30, 1999, when the Giants played their last game at that miserable dump: (Note the warm-weather gear for a game in late September … Candlestick was funny that way.)