Are people still doing this? 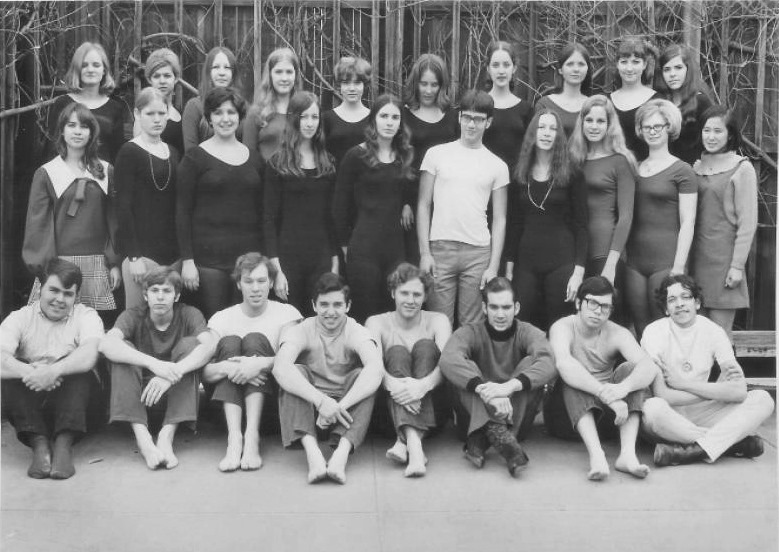 This is a picture of one of the dance groups at Antioch High School in my senior year, which makes it 1969-1970, which makes me 16 years old. As I recall, there were two official dance groups, and anyone must have been able to join this one, because I had never taken a dance class and my skills were non-existent. I did this because a lot of my friends were involved (just to note the obvious example, my future wife of 40+ years is just over my left shoulder).

I imagine the real reason I was in this group can be ascertained by looking at the positioning of the various participants. The real male dancers are sitting in the front. The ringer (me) is standing amidst all of the female dancers. A few of them were girlfriends of mine, again obviously including my future wife.

Three of the people in the photograph are now dead, to my knowledge … I assume there are more than I know about, everyone in the picture would be in their early sixties by now. A couple of them continued in dance after high school … one founded a dance company at a major university. At least one person in the picture became a doctor … well, two if you count me, but I’m talking about medical doctors. One of them ran for Lt. Governor of California on the Libertarian ticket. One of them was the maid of honor at our wedding.

I’m still in touch with a few of these folks. I see the girl to my right once in a while … my wife sees her more often than that. One of the boys and one of the girls have been to my house, which if you know me is a big deal. I’m friends with a few of them on Facebook.