what ann powers taught me about lou reed

Ann Powers has been a favorite of mine since the days of her weekly column in the SF Weekly, and I was proud to get to know her when we were both in the English graduate program at Cal. Her resume since those days is astonishing … she’s written for the New York Times, was an editor at the Village Voice, worked at the Experience Music Project, took over from Robert Hilburn at the Los Angeles Times as chief pop critic, wrote, co-wrote, and edited several books, had a daughter with her husband Eric, and now she writes for NPR.

Over these years, she has become a master of a very difficult genre, the obituary. For one thing, I’m always amazed that she can get them out so soon after someone’s death, and still do justice to her subject. She brings everything she knows and has experienced to these pieces, and she’s so good, I always look to her first when someone dies. It’s a thankless task, writing those pieces, but we are all grateful that she does it so well.

I got a text from my son this morning while I was sleeping, asking if I was going to write about Lou Reed. I hadn’t heard the news, although that text told me everything before I even looked up the details. There may be a time when I’ll talk about Lou Reed and my relationship to his work … some of it exists already in the depths of this blog. (Coincidentally, the first time we saw Lou in concert, Robin was pregnant with our son-to-be.) And I, too, have written more than a few obituaries that have been well-received.

But for now, there is no need to go further than Ann’s piece for NPR, “What Lou Reed Taught Me”. Check it out.

Listening to Street Hassle, with its songs about feelings no one would ever want to admit, with titles like "Dirt" and "Leave Me Alone," I slowly realized what most of the punk or New Wave rock I loved so much rarely gave me. Clarity! Most music was too earnest, too clever, too deliberately gorgeous or bloody exciting to require what Reed's demanded, which was that a listener sit with the ugliness of a moment and really grasp the fatal mistakes and collapses that go hand-in-hand with the risks that bring humans to life.

Here we are in what seems like another lifetime: our daughter Sara, Robin, me, and our son, Neal. I am wearing a T-shirt Robin made me. Within the red heart, it reads “Coney Island Baby”. If memory serves, on the back it said “The Glory of Love”. 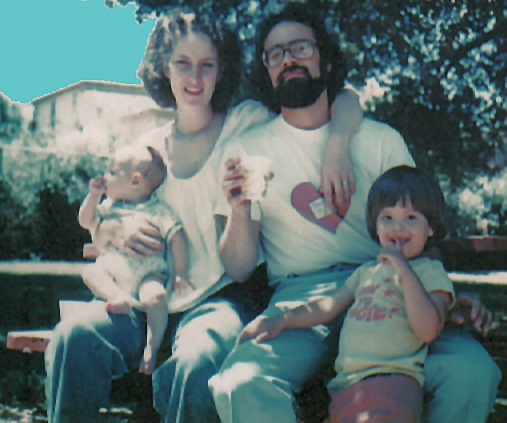 nothing in particular except to say I'd been waiting to hear your voice on this. mine is still stuck somewhere near my sternum.

There will probably be more, but Ann said a lot of things I wish I'd said, so I went with her as my lead. I've posted a gazillion videos on Facebook and Google+. I also posted the above photo on FB, where it has gotten 41 likes and 17 comments so far, all related to how cute we are. No one says anything about my Coney Island Baby t-shirt :-).