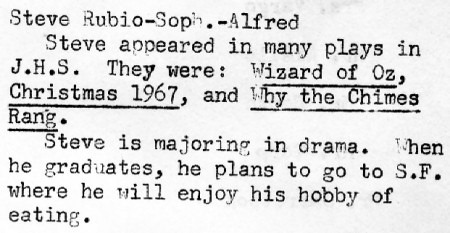 This comes from the program for the first play I participated in once I got into high school. It was called My Three Angels, which was made into a movie with Humphrey Bogart. My part (“Alfred”) was played by Darren McGavin in the original Broadway run, by Aldo Ray in the Bogart film version, and by George Grizzard in a later TV version. There was a Robert De Niro version in 1989, but my character wasn’t in that one, I guess.

I was a sophomore, and the way the Antioch school system was structured in those days, 7th-9th grades were “junior high” and 10th-12th grades were “high school”. There was no “intermediate”, or whatever they call 6th-8th grades now. Of the three junior high plays listed, I only remember The Wizard of Oz. I was the Scarecrow, and I was unable to hold my arms straight out when Dorothy discovered me guarding the corn field, so they gave me a pole I could use that enabled me to rest my arms using my shoulders as support. I should probably remember more about that, but hey, I was in 7th grade.

It says I was “majoring” in drama, but I don’t recall having “majors” in high school. While I was doing OK in school, I apparently had no thoughts of college. This was the end of the Summer of Love, all I wanted to be was a hippie, and thus my plans were limited to going to San Francisco and eating (no mention of a job, of course). I actually did spend about a month in S.F. after I graduated from high school, but with no money and no job, I was soon back at home with my parents.

Here’s a lo-fi picture of me in My Three Angels … that’s me in the back: 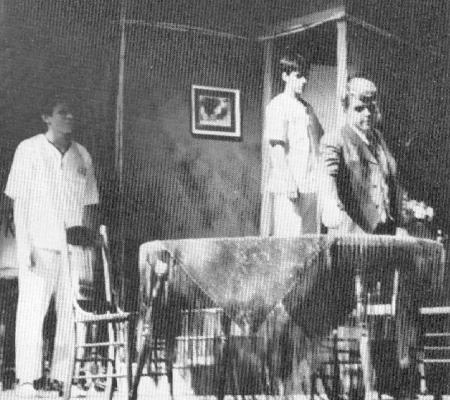 I am so into the double nostalgia move. I've been thinking a lot about that sort of thing with this go-round of my New Media course. And I love that photo, which I don't remember seeing before.

BTW, can I make an early pitch for you to reprise your World Cup blog next year? I am already excited to read what you have to say!

Yes, I've been planning to do my WC blog again. It will be an interesting evolution, I think. In 2002, I just posted in my regular blog. I had opinions ... as usual with soccer, they were informed more by my taste preferences than by my understanding of the sport. In 2006, I started the separate blog, and enjoyed it a lot. I still had opinions, I perhaps had more knowledge, and my commenters were great. In 2010, more of the same, but by then, my nephew had really come into his own, and whenever he commented, it was worth reading.

In 2014, I'd be happy just opening up the blog to my nephew. It's fascinating to talk soccer with him ... he sees a different game from the rest of us. And soccer analysis has grown immensely in recent years. What's cool is that my nephew works as an analyst himself, now ... cool for him, and cool for the rest of us. (Plus, he often gets us free tix to see the Quakes.) I'll find myself talking about some tactical problem I'm having with the Football Manager game, and an hour later, he'll have clued me in to all sorts of new ideas.

Finally, I mentioned this when I posted that picture nine years ago. Because my parents skipped me a grade, while Robin's parents didn't go for that move, I was a grade ahead of her even though we're the same age. With the way Antioch schools were structured, this meant when I was in 10th grade at Antioch High School, she was in 9th grade at Park Junior High School. Her best friend was in my grade, though. I didn't know her, didn't know she existed, but she claims to have had a crush on me that whole year when we were at different schools. She's pretty sure she saw me in My Three Angels ... whichever play it was, she saw me on stage more than once before we ever met. Slightly more than a year after the above photo was taken, we were kissing in Cheryl Marks' backyard.