They are six years old today. Boomer is bigger and prettier and lazier. Six is an idiot savant who can’t be lazy because her ADD keeps her busy all day and all night. While we got them from a rescue service, and thus I assume they are the feline equivalent of mutts, they exhibit many of the traits of Bengal cats, enough that it’s clear they are at least part Bengal, probably a big part.

Bengal cats are athletic. Six is big enough that Robin often calls her Fat Cat, but she’s quite nimble. A favorite trick of hers is to climb onto a kitty condo and wait for Robin to walk by, at which point she leaps onto Robin’s shoulders.

Bengals like water. We have never had a cat that liked water. Until now. When we take showers, the two cats come into the bathroom, with Six entering the walk-in shower and Boomer climbing up the side so we can drip water on her. If they hear water in any faucet in the house, they will come running. If you want to occupy them for awhile, you can just turn the water on very gently, and they’ll climb in the sink and play with it. When Robin gets her spray bottle to spritz her hair in the morning prior to brushing it, Six will come, squint her eyes, and wait for Robin to squirt water on her face.

Six plays fetch. She really is the goofy one of the two. There are these two socks that she brings me. Only a specific two … she never brings any other socks. Those socks go up and down the stairs every day. She is especially prone to bringing them to me when she notices Robin is out of the house. Meanwhile, she plays fetch with Robin. Robin has even trained her to drop the fetch toy in a box.

Neither of these cats are particularly affectionate, although Boomer does sleep every night snuggled up to Robin. When Robin works at home, Six becomes her “administrative assistant”, laying across the work desk, getting in the way, knocking stuff onto the floor, “accidentally” pressing keys or the mouse. But she’s not a great one for sitting on your lap.

I’d say the water is the weirdest thing about them, but it must be said, Six does a dozen or so weird things every day. We’ve had cats our entire married life … we’ve seen a lot of them come and go. And we’ve heard enough stories from other people, and we’ve watched the YouTube videos, and we know that everyone thinks their cat is special. Bengal owners KNOW their cats are special. And with Six, “special” most likely refers to “special education”, which is where she’d be if she went to school.

Here are a few representative pictures, all of which I’ve probably posted here before. First, a look at them giving each other a bath. Even after six years, they get along like good sisters: 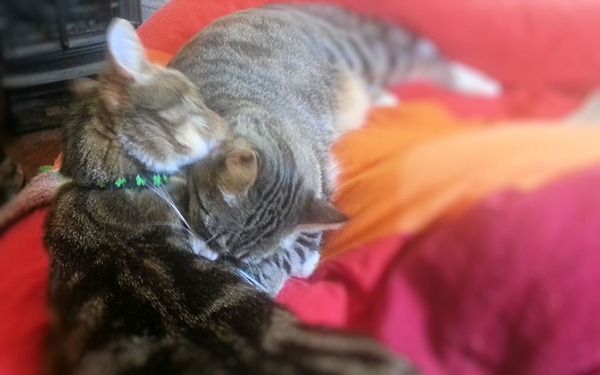 Here is the recent picture I posted of Boomer and Robin sleeping at one in the morning: 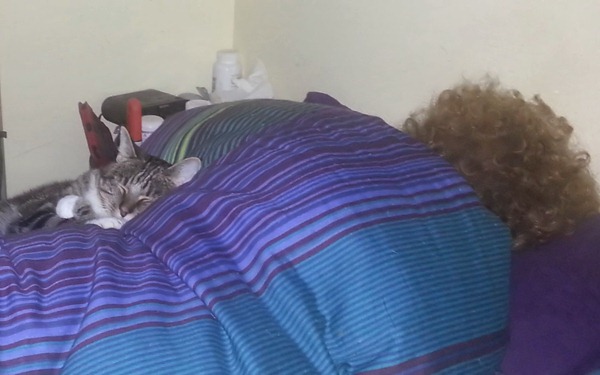 And here is Six in her role as administrative assistant: 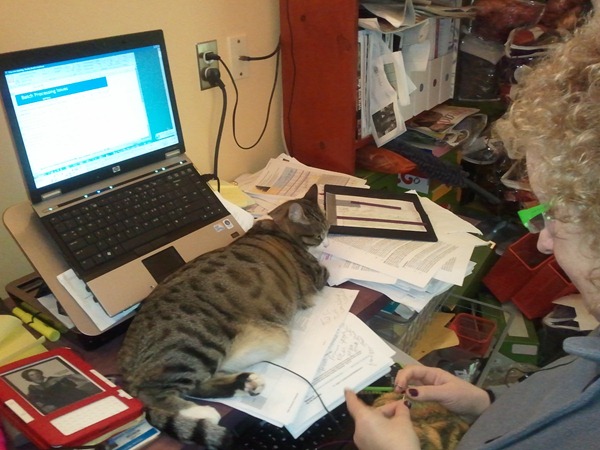 Excellent. I LIKE hearing about other folks' cats. Kathy just had to (well, yeah) buy a kitty fountain (big $) for our eccentric tortie, who had taken to sitting in the bathroom sink and YELLING until Kathy turned on the water. The H2O obsession slips beyond the immediate gene pool.