Home Archives Profile
music friday: bruce springsteen, “if i should fall behind”
what i watched last week

Over the past several days, I’ve had the chance to take in several games.

On Thursday night, I went to my very-first minor-league baseball game, as the Sacramento River Cats hosted the Salt Lake Bees. It was also the first game for my grandson, who isn’t even a month old yet. The River Cats are a AAA team (which means they are just one level below the majors), and I must admit I underestimated them. I thought I’d see an infield with rocks in the dirt, holes in the outfield grass, crappy facilities and food, and poor play. But AAA is filled with many good players, and Raley Field is impeccable. We saw several fine defensive plays, as well as a grand slam homer that was the highlight of the evening, since it meant we all got a free Grand Slam breakfast at Denny’s the next day. Just under 10,000 fans were in attendance (the park seats around 14,000). Here’s a picture of Sara and Félix: 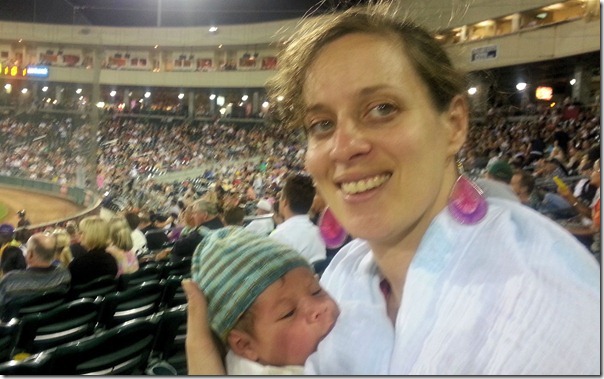 The weekend was filled with soccer, starting with Wrexham, a Welsh club playing at the fifth-division level in England. As you can imagine, we don’t get a lot of televised Wrexham matches here in the States, but Saturday, some British TV outlet had Wrexham v. Grimsby Town streaming online, so I sat down at the computer and took the game in. Wrexham has been around since 1864, and while they’ve never been in the top flight, they’ve had reasonable success in the lower levels. But serious financial problems in recent years (they were placed in financial administration in 2004) have sent them further down than at any point in their history. They play at the Racecourse Ground, which has hosted Wrexham matches since 1872. Seated capacity is 10,500 … attendance for this match was 3,127. It was a 0-0 draw of little note.

Next up, I went out to Buck Shaw Stadium to watch the top team in MLS, the San Jose Earthquakes. The stadium was sold out (10,525), and the fans went home happy after a 4-1 win. We had great seats thanks to my nephew Sean, who works for the team. While it’s hard to compare live viewing to an Internet stream, I can safely say that the quality on display at Buck Shaw was several levels above what I saw at the Racecourse. Here are the highlights:

Finally, Sunday morning, I slept in and caught Liverpool host the Premier League champions, Manchester City, on the DVR. A sell-out crowd of 44,942 saw an entertaining 2-2 draw.

There are several areas I find interesting. First is the way I watched the matches: two of them live, one on my TV/DVR, a fourth on an Internet stream. Second was the general level of play. The Premier League match was played at a higher level than the MLS match, which was at a higher level than the AAA baseball game, which was much higher than the fifth-division Wrexham match. Finally, the crowds for these events reflect … what, popularity I guess. Liverpool: 44,942. San Jose: 10,525. Sacramento: close to 10,000. Wrexham: 3,127.

Liverpool is worth more than $350 million. The Quakes are worth somewhere around $35 million. They are owned by the primary owner of the Oakland A’s, who are the parent club of the Sacramento River Cats. The A’s are worth around $320 million. I don’t know how to read a financial report, but Wrexham’s current assets are just under 300,000 pounds while current liabilities are just under 450,000 pounds. (I don’t even know if those are relevant figures.)

I don’t know what all of these numbers mean.

I heard a story on the radio about some couple who had their newborn with them at both perfect games in Seattle this year. The first picture here reminded me of that--and your grandson's name is Felix!

As a veteran of several minor league parks, mainly in the Carolinas and the midwest, I do have to say that your lowball expectations are pretty out of date. In most of the small-to-midsize communities that are home to rookie/A/AA/AAA baseball, the quality of the field and the park range from very good to MLB in miniature. Sometimes they're freestanding structures, but the best are a key part of neighborhood/downtown rehab efforts that genuinely enhance the ambiance and economy of the area--that is, these parks at times accomplish what is promised, and almost never delivered, by MLB owners trying to extort new parks from gullible city officials. The rehab of the Durham Bulls' park and the warehouse district around it were spurred, of course, by "Bull Durham". The best case I've seen, though, is in Greenville, South Carolina, where Fluor Field is home to the Red Sox A ball affiliate. The park is marketed as a mini-Fenway, which it's not, but it's still a great place to watch a game, even with the cornball dot races and t-shirt guns. The park is the northern cornerstone of what is perhaps the most successful urban rehab effort in the country--downtown Greenville is a jumping place just about every evening, and it's a really pleasant place to be. In South Carolina. Go figure.

Some of the cornball stuff at the River Cats game was endearing, and, of course, we DID win free breakfast at Denny's. But you raise an important point, that it's always a good thing when your prejudices are revealed in an instructive way. My old-school notions of minor-league ball depended entirely on my never actually seeing any minor-league ball.

I will admit, it was a bit disconcerting to see some of my fantasy players on the River Cats roster. Disconcerting, since my fantasy team is supposedly made up of major-leaguers.