music friday: live at the fillmore, 1967

Now I’m really dating myself. I went to my first rock concert during the Summer of Love. I’d been to see Judy Collins a few months earlier, and it was a fine show, but not exactly rock. But, 45 years ago (yikes!), my brother took me to the Fillmore to see Chuck Berry, Eric Burdon & the Animals, and the Steve Miller Blues Band.

The Steve Miller Blues Band did not include Boz Scaggs … he rejoined Miller soon afterwards, in time for the first studio album by the renamed Steve Miller Band, Children of the Future. You can get a taste for what the band sounded like at the time by checking out the hard-to-find soundtrack to the obscure movie, Revolution, which includes this take on an Isley Brothers song, “Your Old Lady”:

The version of the Animals we saw that night was the newly reconstituted one, with Burdon and one other being the only leftovers from the originals. “Eric Burdon & the Animals” were more psychedelic than the blues-based group from the early 60s. Burdon spoke about the legal problems the Rolling Stones were suffering over their recent drug busts, and dedicated his cover of “Paint It Black” to them. Here they perform it at the Monterey Pop Festival, which was held just two weeks before I saw them at the Fillmore:

The Fillmore was much as it is now … yes, the apple barrel was there. If you go to a show there now, you can see the poster for this show on the wall in the upstairs bar: 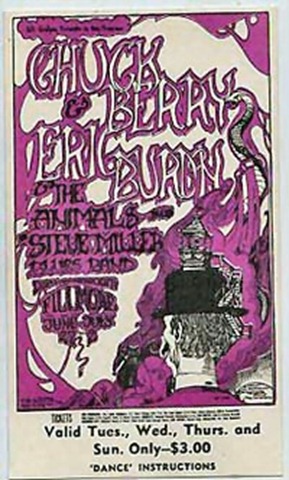 Chuck Berry was only 40 years old when I saw him that night. He had just cut a new album, Chuck Berry in Memphis, which would be released a couple of months later, and while his greatest work was behind him, he wasn’t an oldies act. A live album from those concerts was recorded, Live at the Fillmore Auditorium, that featured a lot of blues. The Steve Miller Blues Band backed Berry for those shows, so you can hear Miller at a very early part of his career, playing harmonica in the background. I think that’s Miller playing the distorted guitar parts in this cut from the album, “Fillmore Blues”: