Tomás made a bunch of requests, so he’ll get the lion’s share of my “By Request” posts unless/until someone else pipes up. I was happy to see Dazed and Confused on his list, since it is a movie for which I have great fondness.

Peter Travers said it best when he called Dazed and Confused a “shitfaced American Graffiti”. The comparisons to George Lucas’ film are easy to make (and most critics made them) … it’s the qualifier “shitfaced” that nails a key difference between the two. These aren’t “good” kids; more importantly, the majority of them are not “bad” kids, either. Linklater is largely non-judgmental here. The only people he looks down on are the mean ones. Participating in a mean act like the hazing of freshmen is “bad”, but only a small minority of the hazers are actually enjoying themselves. The rest are just taking part in a ritual they all went through when they were freshmen, and when the hazing is over, they take the victims under their wings, inviting them to their mindless shenanigans. Ben Affleck and Parker Posey are the only ones who really mean harm, and in the world of the movie, they end up being the outcasts.

While “nothing happens”, and while it seems there is no “moral” to the film, nonetheless the slice-of-high-school-life is insightful. Yes, it sucked to be in high school, but there were also times when camaraderie made it bearable, and this comes across. We see the newly-cool freshmen learning how to be. Of course, what they are learning is how to drink and get high and party, but just as important is what they don’t learn: they don’t learn to be vicious assholes like Affleck and Posey’s characters. They begin to discover how being with others in the same boat makes teenage life a little bit better.

One can’t write about Dazed and Confused without noting the huge number of then-unknown actors who became better known down the line: Joey Lauren Adams (her second film), Milla Jovovich, Rory Cochrane, Adam Goldberg, Marissa Ribisi (her first film), Cole Hauser (his second film), the aforementioned Ben Affleck and Parker Posey, and Matthew McConaughey (his second film). Not to mention the remarkable Wiley Wiggins (first film), who came out of nowhere, reached cult status, and went on to an ever-evolving life that is (mostly) outside of the movie world (check out his website).

I suppose I should mention the obvious about Wiggins, as well. In Dazed and Confused, he is the pitcher on the junior-high team. Wiggins is not a baseballer … a stunt double was used in the brief game scenes … but he eerily offered a glimpse of a pitcher from the future. Here is Wiggins as Mitch Kramer: 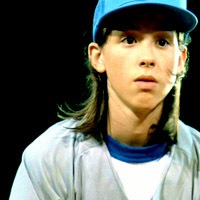 If you asked me to name my favorite directors, I don’t think it would occur to me to mention Richard Linklater. Yet I have seen eight of his films, and given a 9/10 rating to three of them (if you’re counting, Dazed and Confused, Before Sunset, and A Scanner Darkly). All but one of the others gets at least 7/10. This tells me two things. One, I should revisit that one Linklater movie I hated. Two, I need to catch up on the ones I haven’t seen yet. #756 on the They Shoot Pictures, Don’t They list of the top 1000 films of all time. 9/10.

Got better and better for me over several viewings. I was thrown off the first time because Richard Linklater chose to tell his own story, rather than mine. I eventually adjusted.

Although I was about a decade ahead of the freshmen (I graduated from high school in 1970), I found a lot of the movie to be very much like my own high school years. Although for the first part of those years, I was one of the nerds, and in the second part, I was in love, in the third part, I was a stoner. I went from Adam Goldberg to Rory Cochrane as I made my way through high school.

I've watched this movie more than any other in my life. I actually watched it everyday for 26 days in June 1996. There are many things I love but the #1 just might be the way each person comes alive in such a believable and human sort of way. I can't relate to one damn thing in their lives--the time, place, race, drugs, events or concerns. None of it was part of my high school experience. But their emotions, fucking spot on. Thanks!

Don't thank me ... the thanks go to you for requesting it!