when i was young

This picture was taken on October 17, 1986. It showed up as a random wallpaper on my computer, and I started thinking about all the details in the photo, and thought to post the picture here and look at them more closely. 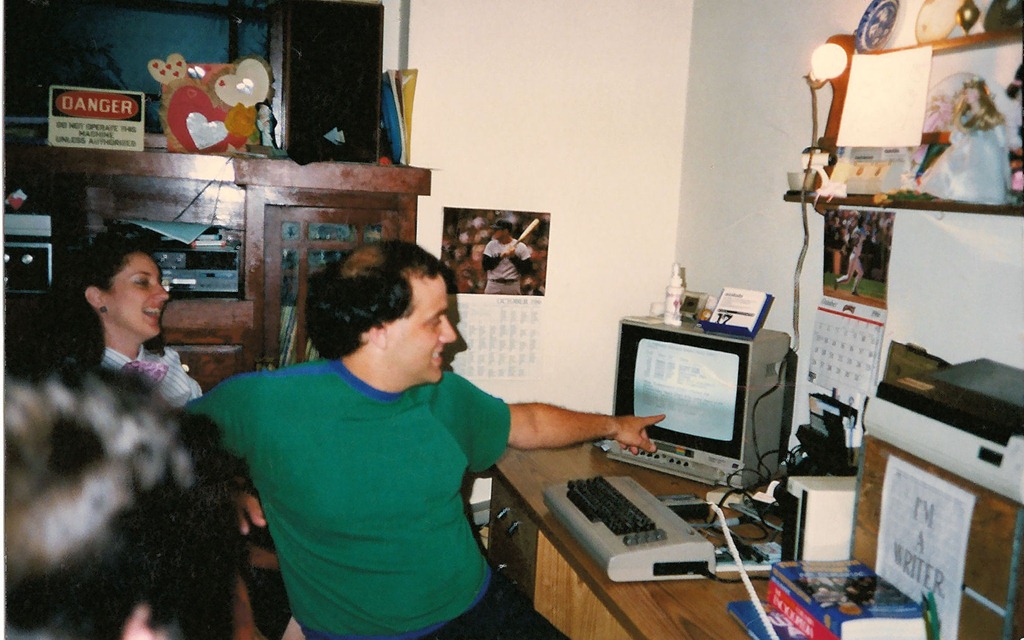 OK, upper left. I don’t remember where I got the DANGER sign … probably from the factory I had quit two years earlier. I’m guessing Robin made me the valentine. Next to the valentine is a Gandalf figurine from/by/? Royal Daulton. My mom gave this to me; she mistakenly thought I was a big Tolkien fan. I don’t know where this thing is today, but I see it sells for around $175 online. Oops, guess I should find it.

Underneath those items, left to right, I see a turntable atop a receiver, then a dual cassette player with a few tapes on top, a cabinet that held vinyl records, and a calendar from Major League Baseball (I think).

There’s Robin, obviously … she had just turned 33, which is how old Sara is now (when this picture was taken, Sara was 8). Then me, also 33, still with hair, and the remnants of the physique I had after ten years of hard labor as a steelworker. I’m not sure from this picture who the person is in the bottom right, but I have another picture from a different angle that would answer that question, if I felt like finding it.

On the wall, upper right, there are a couple of collector’s plates, a collector’s doll, a bare light bulb, and three mementos from my Spanish grandmother: a mixer, a washer, and a dryer (I believe the latter two were salt and pepper shakers). On the wall beneath those items is a San Francisco Giants calendar.

On to the desk. The monitor is a color one made by Commodore. There is a calendar on top of it, probably word-of-the-day, since that’s what Robin usually got me in those days. She still gets them for me every year, although the theme is different at times (this year it’s the Word Origin Calendar, and today’s “word” is “monkey wrench”). There’s a spray bottle of something … I’m guessing screen cleaner.

Ah, the screen. I am pointing at a trivia game. CompuServe had a nationwide trivia contest, and somehow, I made the finals. The event commemorated in this picture is the finals, me against some other guy I didn’t know. The match went into overtime; I lost on a Beatles question, as I recall. I wasn’t working for CompuServe yet, so I was paying to play in this tournament.

You can see floppy discs underneath the Giants calendar. On the bottom right is the printer, dot matrix I’m sure, sitting on a box with paper hidden inside it. I love the “I’M A WRITER” sign. At that time, I was in the second semester of my junior year at Cal, and had probably finally quit taking writing classes from the invaluable Marcy Alancraig. Not sure why I thought I needed the sign … I’ll leave it to you to decide if I ended up being a writer or not.

The books in front of the printer box are a baseball stat book (no Internet stat sites yet), a one-volume encyclopedia (no Wikipedia yet), and an atlas (no Google maps yet). I assume I had them to help with trivia questions, just as I had my friends with me to help, as well.

Finally, there is the gawdawful computer setup. Start with a basic Commodore 64. In the back of the C-64 on the left is the modem … might have been 1200 baud. That white line stretching from the modem to the bottom of the screen is the phone cord … the phone was on the wall on the other side of the room.

The cream-colored rectangular thing behind the C-64 on the right was the floppy disc drive. It wasn’t the right model … for some time after the C-64 came out, there was no disc drive for it, so we bought a drive made for the PET, a Commodore computer that preceded the VIC-20 and C-64. This particular drive wasn’t totally compatible with the C-64. Copy protection didn’t like it (not that we had many protected programs), and it had some trouble communicating with the computer. The flat thing lying between the C-64 and the hard drive was a circuit board (is that the word?) that contained software which allowed us to use the “wrong” drive. The white stripe underneath the board is probably a couple of books of checks … the board had a tendency to sag, which made it work kinda crappy, so we always had to stick something underneath it to prop it up, and checkbooks were just about the right size and shape.

Robin looks great, but she still looks great - me I looked bad even then!!

Great post, brilliant concept -- you might even inspire a blog with it, some day. (Me talking about old pictures featuring myself... nothing self-indulgent about that, not at all.)

That is a lovely picture of Robin. She's reminding me of someone famous, but I can't place who.

I'd read that blog. Self-indulgent, sure, but it would connect with lots of people, kinda like when you post pictures of old Creem magazines.

When we were younger, Robin was most often compared to either the Warhol superstar, Viva, or the actress Carol Kane. If you can picture those two women in your mind, you'll get the idea. But by the time this was taken, she was long past her frizzy-haired hippie-chick phase (she was never a hippie chick, she just looked like one) ... based on when the photo was taken, I'd guess she had just come home from work, and was still wearing her work clothes.