Steven Levy, author of In the Plex, has already created a Google+ page for his book. I placed that page into one of my G+ circles (Geeks, if you must know), and via that page, I read a brief post by Levy regarding a Mashable article, “Two Schools of Thought: The Key Difference Between Apple and Google.” Levy drew our attention to the following factoids in the article, which was written by someone who had just read both Levy’s book and the recent biography of Steve Jobs:

If you need proof that data is king at Google, look no further than In the Plex. The word “data” appears in Levy’s book approximately 319 times. “Design,” on the other hand, appears fewer than 60 times.

The word “design” and its variations appears in the Steve Jobs biography 432 times. The word “data” appears just 26 times in the book.

Levy adds, “the comparison itself is built on data. That's kind of an implicit indication that Google is on to something.”

All of this led me to reflect on the reasons why I have never owned an Apple product.

Take computers. Our first two computers were “toys” (VIC-20 and Commodore 64). Then we had various DOS clones, followed eventually by a Windows clone. At some point, we started buying actual name-brand machines: Acer, Compaq, HP. Were any of these computers as good as their Apple counterparts (Apple II and various Macintoshes)? Probably not. Did I care? No, because the computers we had were always cheaper than Apples, and they did what I wanted them to do. They weren’t always pretty about it, they were never something you fell in love with, but they worked just fine. Apple had better commercials, and their computers were lots prettier. I didn’t care.

Or take MP3 players. I was an early adopter, getting a Rio 500 somewhere around the beginning of the year 2000 (almost two years before the iPod made its debut). The second player I got was a Rio Karma, and holy moly, did that thing kick ass. It had gapless MP3 playing, an equalizer within an equalizer (I know that’s not exactly right, but I’m not a techie … it had a 5-band equalizer, and you could set “0” for each band, which gave it a wide range), a 20gig hard drive, and it played lots of geeky formats like Ogg Vorbis and FLAC. That sucker ruled. And it looked like this: 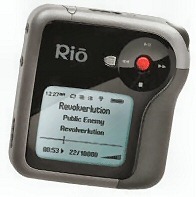 Honestly, it was uglier in real life than it is in this picture, thick, heavy, as if it was a prop from The Flintstones.

Eventually, Apple turned the music world on its head with the iPod, which was a lot prettier than the Karma. It didn’t do as many things as the Karma, but it was easy to use, and it worked with iTunes.

Somewhere in all of this, I started listening to subscription streaming services like Musicmatch, Rhapsody, Zune, MOG, and Spotify. Steve Jobs, meanwhile, famously said that no one wanted to rent music, they wanted to own it. So I had personal devices and computer software that allowed for streaming, and never much used iTunes. iTunes and iPods were pretty, but I preferred access to a gazillion songs whenever I wanted them.

Or smartphones. iPhones are pretty, and expensive. My first smartphone ran WebOS … I was a Palm user for more than a decade. After that, I moved to Android, a more popular OS than the one that Apple uses.

Where am I going with all of this? My brain started mulling it over when I saw that part about Google, Apple, data, and design. I have a clearly-established preference, one that goes back a few decades, for data over design. The first disk drive we ever bought was for the Commodore 64 … it was the model meant for the PET line of computers, which meant it was “better” in some ways than the official C-64 model, but it required an ugly board sticking out of the back end of the 64 to make it work. Apple makes wonderful products that are masterpieces of design (and are fine on a functional basis as well). But design doesn’t interest me nearly as much as does data.

Placing myself on this data/design continuum, I think I finally understand why the death of Steve Jobs was so important to so many people. There was an aesthetic element to the products Jobs gave us that inspired a romantic appreciation for those products. Competing products from other companies seem prosaic next to what Jobs produced; they lack romance, they lack the almost religious inspiration that Apple users felt about what Jobs meant to their lives. People like me never looked at our computers or our music players or any other piece of electronic equipment and thought “how pretty.” We look at those things and think “how much.” We choose data over design. We have a hard time understanding the outpouring of affection when Jobs died, because our machines don’t matter to us in the same way … our machines are tools, not works of art.