Home Archives Profile
there’s going to be a lot of these when the world cup starts
ok, me too

random friday, 1979 edition: marianne faithfull, “why d'ya do it?

It’s always hard to decide how much people know about a subject in advance. Do I need to give a detailed synopsis of the life of Marianne Faithfull, or do I assume everyone knows the story? She’s already written two autobiographies, and that doesn’t seem excessive. She was an iconic figure in the 60s, remade her career on the heels of punk rock in the late 70s, and continues as a vital artist well into the 21st century. As an actress in the 60s, she was credited with being the first person to say “fuck” in a mainstream movie … she followed that up by setting a new standard for skin-tight leatherwear in The Girl on a Motorcycle, then played Ophelia in a film version of Hamlet. Four decades later, she was nominated for a Best Actress award at the European Film Awards for Irina Palm (ironically, she lost to Helen Mirren … see below). Her beauty made her as much an icon (there’s that word again) of 60s English “birds” as Julie Christie (Andrew Loog Oldham, then the Rolling Stones manager, famously said, upon seeing her for the first time, that he’d seen “an angel with big tits” and signed her up to a recording contract, making sure her first single was written by Jagger and Richards.) Her mother was a baroness … Faithfull herself is now Baroness Sacher-Masoch, her great great uncle being Leopold von Sacher-Masoch, who wrote Venus in Furs and gave the world the word “masochism.”

You might say Faithfull is the rock and roll version of Helen Mirren. Mirren, born a year earlier than Faithfull, was born Ilyena Vasilievna Mironov, the granddaughter of a Russian nobleman. While she was not as famous at the time, she, too, was “an angel with big tits” who seemed to personify English girls in the 60s (Helen’s on the right, Marianne on the left): 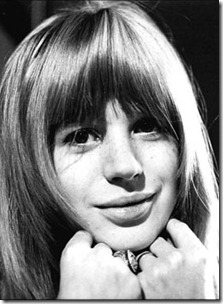 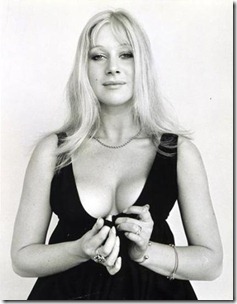 But Marianne Faithfull wasn’t really the rock and roll Helen Mirren. Not once you add the famous boyfriend (Mick Jagger), the infamous busts, the heroin addiction, the living on the streets, the cocaine, the anorexia … no, this was not the life of Helen Mirren. Musically, Faithfull went from this:

No one expected Marianne Faithfull to once again become a vital recording artist. She released one album to little fanfare … meanwhile, disco and punk became the defining music of the time. Many 60s artists turned their backs on punk … others tried to meet it head-on, resulting in classic works like Neil Young’s Rust Never Sleeps and the Rolling Stones’ Some Girls. Those albums, while clearly influenced by punk, were not out of line with the artists’ earlier work.

And then, near the end of the decade, Marianne Faithfull unleashed Broken English on the world.

The title track spoke to the horrors of European terrorism. The title itself might have referred to Faithfull’s voice, which did indeed sound broken. It was the voice of a woman who had lived several lifetimes, but Faithfull was only 32 years old.

Faithfull had a hand in the writing of a few of the songs on the album, but mostly she worked as an interpreter. She may have been the daughter of a baroness, but she found her way inside “Working Class Hero”:

And Faithfull managed to turn a song by Shel Silverstein into a feminist anthem:

But she saved the most scabrous for the last. Faithfull and the band added jagged music to lyrics by poet Heathcote Williams that, according to Wikipedia, “were enough to cause a walk-out by the female workers on EMI's production line.” A tale of sexual betrayal that makes “You Oughta Know” sound like a nursery rhyme, “Why’d Ya Do It?” graphically scratched the face, back, scrotum, and every other body part of the offending man. The words are all over the place … for every two good lines, there’s one clunker (and sometimes the ratio is switched). But the zingers are unforgettable … my wife is partial to “Every time I see your dick, I see her cunt in my bed.” (Whenever we hear this song, she reminds me of how much she loves this line. I’m not sure why she likes to tell me this.)

Faithfull’s delivery makes even the worst lines sound cutting and vicious and hurt. And there’s something about this iconic sex symbol talking trash to a cheating man that is, well, kinda hot, even to the men she might be singing to. It’s not easy to explain … suffice to say, if you’re gonna get whipped, why not have it done by Baroness Sacher-Masoch.

Perhaps even more remarkably, Faithfull continues to sing this song to this day. She still dredges up bottomless anger, and the audience still loves her for it … she even sings Robin’s favorite line twice:

She who laughs last? Mick and the boys haven’t made an album as good as Broken English since it came out more than 30 years ago.

Thanks for this one. Mitch Ryder had his "comeback" around the same time as Marianne Faithfull recorded Broken English--I wrote about 'em for the Austin Chronicle. Mitch's late 70s and early 80s albums are also full of some hard as nails confessional, confrontational stuff, and his live shows were killer. I didn't see Marianne until about 1994 in Dallas (yes, she played "Why'd Ya Do It?"). At the end of the show (in a pretty small club), she walked through the audience and brushed up against me (Faithfull sweat!). She's also a really tiny person.

Good reminder on Mitch Ryder ... I'd forgotten those confessional songs. We saw Marianne a couple of times in the early 80s. At one show, it was pretty hot on stage, and she decided to take off her jacket or whatever it was (don't remember that part). In the process, the shirt underneath was pulled upwards, showing what had prompted Loog Oldham's angel comment. I confess, I looked.

I am trying to get in touch with Steven Rubio

I am a student at Southbank University, London, on the last week of his film degree.
I read your review of Dino's 1976 remake in King Kong is back (2005)

It helped me a lot with my dissertation, regarding why remakes today seem to be so bad.

I concluded that a remake is made up of three distinct elements:

Nowness, Pastiche and Nostalgia and blamed the rest on Hollywood copying Spielburg and Lucas.

I have a theoretical model I would like to e-mail to you regarding this matter
which I hope might be a useful educational tool for students.

Hi Jayson. You can reach me at srubio at gmail dot com.