I'll be on the road until next Sunday. Internet access won't be assured ... my phone should keep me up to date, but I don't know how much I'll post from it. My laptop will also be useful whenever I'm staying at a place with wi-fi.

Attack of the Giant Leeches. Just as bad as its title. 1/10.

Slumdog Millionaire. Don’t know what to make of this one. I liked it, got caught up in the story, bought into the game show/flashback structure. And I don’t think only Indians can make movies about India. Yet I never quit thinking that this was the movie of a visitor, if not a tourist … a good visitor, but an outsider when perhaps an insider was called for. It’s entirely possible, though, that I’m over-intellectualizing this one … I did like it very much, after all. 8/10.

There was really only one way to keep up with the happenings across UC campuses as students rallied against fee increases. Twitter. It wasn’t all good … there was a tendency for people to re-tweet everything, so each bit of news was repeated a dozen times. And while the immediacy of the tweets were invaluable, there was a definite feeling of the blind men and the elephant: people tweeting from inside Wheeler had a different perspective than people tweeting from outside Wheeler, and no one seemed to recognize the elephant for what it was. But that was a small price to pay for the ability to get unfiltered information out to the masses. There is a place for analysis, but that comes tomorrow. For now, follow the tweets.

We used to have the world's greatest system of higher education and we thrived.  Now we have the world's biggest system of penal institutions and we're broke.  That's the decision Californians have made over the past 30 years: more prisons and better paid prison guards, but lower taxes and less education.  (And not just higher education, either.)  It's hard to think of a stupider allocation of resources.  But hey — at least our property taxes are capped!  Hooray!

1. Spiderbait, “Black Betty.” There’s a lot of cross-cultural stuff going on here, which I suppose says something about the 21st century. This one’s an old Leadbelly tune covered by an Australian band, who follow the lead of Ram Jam’s 70s remake.

3. Los Lonely Boys, “Heaven.” And a Tex-Mex band with a little ZZ Top thrown in.

4. Danger Mouse, “99 Problems.” And one of the most famous mash-ups ever, mixing Jay-Z and The Beatles.

6. The Streets, “Dry Your Eyes.” And an epileptic rapper from Birmingham. England, not Alabama.

7. MC Hawking, “Bitchslap.” And someone imitating Stephen Hawking as a rapper.

9. Kanye West, “Never Let Me Down.” Hopefully, at some point in the future, he will be known once again for his music rather than his antics.

10. Arcade Fire, “Rebellion (Lies).” I’ve mentioned this before. You know Bruce Springsteen likes your work when he invites you to sing a song with him in concert. You know he loves your work when that song is one of your own. A couple of years ago in Ontario, Bruce had Win and Régine come up on stage, and they sang “Keep the Car Running.”

I'll put it this way: Even if you think a building is an eyesore, I don't think you can leave it off the map.

shake hands with the ball

Unless I miss my guess, a good majority of my vast readership will have no idea why this photo is important. If you know an Irishman, you might ask him: 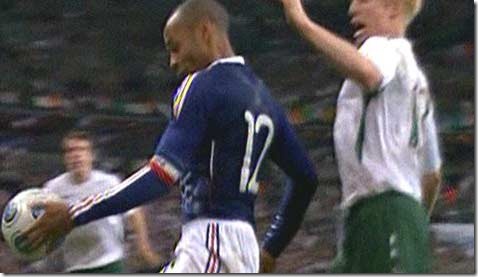 Nobody would claim that Safeway is green. But Trader Joe's isn't either. I've written before about the excess packaging at the store. And TJ's is also under pressure by Greenpeace to agree to buy sustainable seafood. (Sign the petition here.)

This housemate is certainly not alone in averting her gaze from our buddy Joe's flaws. What's the deal? I have two theories. First, a low price will buy you a lot of good will. And, second, TJ's appeals to a progressive aesthetic by carrying fewer processed foods, fewer chemical cleaners, and more alcohol (whose supply chain is hardly green). Put all that in a less industrial setting and, voila, you have customer loyalty that has absolutely nothing to do with your purchasing practices, and may even believe they are what they're not.

There may be one other factor: Unlike either Safeway or Whole Foods Market, Trader Joe's is privately held. That makes it harder to dig up dirt on the company and to do anything about what you find.

Now, that was funny!

It hadn't occurred to me until it actually happened, but last night's episode, wherein the cast of Seinfeld got to interact with the characters on Curb Your Enthusiasm, was brilliant. My favorites involved J.B. "Comedy Gold" Smoove as Leon. We've known all season long that Leon would have to meet up with Michael Richards ... who would have predicted that when it happened, Leon would be impersonating a Jewish accountant? There's also the semi-ongoing joke about how black viewers never watched Seinfeld ... when Leon visits the set during a rehearsal and sees Jerry and Elaine in the kitchen/living room, he asks Larry who those people are ... and when Newman shows up at the door, prompting the inevitable "Hello, Newman" from Jerry, Leon finds it hilarious, not because of the inevitability, about which he knows nothing, but because Wayne Knight looks funny to him.

Add in the usual offensive jokes about body parts (so offensive, even I hesitate to repeat them here), and you've got a classic episode.

Oh, and Elaine said the f-word.

Il Divo. I confess I knew little about the titular character, Italian politician Guilio Andreotti, before watching this film … typical American provincialism at work. One of the nice things about Il Divo is that it works even if, like me, you don’t know the history, since it’s more about politics in a general sense. It’s a bit like a Godfather movie, only made by Italians. Unfortunately, the Godfather movie it most resembles is Part III, but Il Divo is better than that one. Toni Servillo does a terrific job as Andreotti, moving around like Max Schreck with blood, showing a passive face to the world while directing corruption from behind his mask. 8/10.

Wonder Boys. It gets the social aspects of academic life right, gets reasonably appealing performances from its fine cast (Michael Douglas, Robert Downey Jr., Frances McDormand, Tobey Maguire, Katie Holmes), and … well, that’s it. The plot is quirky like a screwball comedy, but it’s played far more low key than that would suggest, and it doesn’t quite work. If you’re hankering for Yet Another Male Mid-Life Crisis movie, this is a good one. But Wonder Boys is also #111 on the They Shoot Pictures, Don’t They list of the top 250 movies of the 21st century, and that’s just silly. 7/10.

Attack of the Mushroom People. Speaking of Creature Features, this movie was the first one ever shown by the Bay Area’s first Creature Feature host, Bob Wilkins, back in 1966. (Info from the great Blog Wilkins website.) It’s nowhere near as cheesy as its American title (original title is Matango, which is the name given to the monstrous fungus that makes the film a horror movie). It’s the kind of movie that begs for complex, subtextual analysis … it’s about class and gender and atomic bombs and anything else you can stuff in there. I also had a hard time staying awake, which is perhaps only fair, since I always fell asleep during Creature Features back in the day (it wasn’t easy for a 13-year-old to start watching a double-feature at 11:00 PM). 6/10.