While we were in Portland, we had a chance to see our friend Dub in the band Conroy-Debrie. Dub has been playing guitar pretty much as long as we can remember, and we go back more than 40 years with him (we go back so far, we remember before he was called “Dub Debrie”). Conroy-Debrie consists of Dub on guitar and vocals, his wife Anne on vocals, guitar, and percussion, and Tony Conroy on bass and vocals. They make an impressive trio, each bringing something different to the mix. Tony’s bass playing is thoughtful and melodic, and his solos are concise and on the spot. He also sings the bass parts. Anne’s background as a drummer shows up in the way she fills in the spaces with a variety of percussion instruments … you don’t miss a drummer because she’s taking care of business (although they sometimes play with a drummer, when I expect they roar with just a bit more power). She’s got a voice made for blues-rock, and she works a torch song with the best of them. She’s also endearingly goofy on stage.

Meanwhile, there’s our longtime friend Dub, who is masterful at so many different styles that there’s no use listing them. Tony and Anne were effusive in their praise for the breadth of his musicianship. Of course, he makes it look easy. And his vocals are strong in fast songs, slow songs, and in between songs.

Dub isn’t in the best of health these days, and as we spent time together at his and Anne’s home, I confess I wondered how he would even make it to the gig. But once he hit the stage, nothing else mattered. He drew energy from the music and his band mates, and from the crowd as well. For four hours, he cranked it up, out, and every which way. It was good to see him singing a song like “Into the Mystic,” which he’s been singing since we were all teenagers … it was good seeing him sing his latest original songs.

I mean no disrespect to the venue where we saw them play … I have written before about the importance of small bars and clubs where musicians provide entertainment and, perhaps, even a little meaning to our lives. But it’s pretty clear that Conroy-Debrie is head and shoulders above the average bar band. I can only imagine what someone thinks who just happens to be in the bar when this “unknown” band starts playing. Holy shit, that guitarist shreds! Holy moly, that woman can sing! Holy everything else, that’s a fine and tasty bass player! As a biased observer (Anne’s mom) noted, these folks could play anywhere and win over a crowd. That they are friends of ours just made it sweeter.

And I helped carry in their equipment, giving me the chance to say “I’m with the band.” Thanks, guys.

Tom Hanks pontificating while wearing a suit and tie is not rock and roll.

Bruce fan watching this show: "would these other legends hurry up so I can see Bruce?"

all props to geezer rockers facing the hi-def cameras with pride ... this Browne kid has come a long way from his crush on Nico

with apologies, I confess if I were watching a recording, I'd fast-forward thru Jackson Browne

CS&N are bringing out everyone but the Y that kicks their ass (Bonnie's OK, though) ... JT? Lester Bangs just threw up

all this needs is Forrest Gump hanging out in the shadows

Sting belonged in the CSN set

due respect to Clapton, in that case, the replacement was better than the first choice

four hours, yet there will be no disco, no punk, no hip-hop

shit, C&N are back

bad sign: I just turned the volume down ... Turned it back up for Little Anthony

one song into Aretha, and I'm ready to say that so far, Stevie Wonder has been the only inspired main performer, J.Beck best guest

Aretha has enough soul for two people, which is a good thing, since Annie Lennox is a machine

Metallica ... quick, someone record their performance and upload it to a torrent

am I a bad person because I want to stuff James Taylor's head inside Lars' bass drum during "Enter Sandman"?

I'm such a Lou Reed fanboy ... just like the guys in Metallica

If Aretha is a 10, Metallica is a 5 ... but they are having a blast and are actually trying

hey New York, we don't give a fuck about the Yankees, and Metallica is a California band

in the absence of punk outside of one Bruce song each from Patti Smith and Tom Morello, give it up to Metallica for making an unholy racket

christ, Bono says one sentence and I already wanna puke

is "bono" irish for "insufferable prick"?

the Professor on piano!

thank you, Bruce, for shutting up one of Bono's endless blatherings

fergie got retarded! Note to Annie Lennox: it ain't about hitting the right notes

OTOH, "Gimme Shelter" is one of the greatest songs of all time ... it doesn't really need retarded

the older Mick gets, the more he looks like a David Johansen impersonator

ok, Mick's gone, can we fast forward to Buddy Guy with Jeff Beck?

Bono just said he was humbled ... and I'm Barack Obama

confession time, as Jeff Beck fills in for Eric Clapton: The Yardbirds were my favorite group when I was a kid.

I never cared about Jeff Beck's career once Rod Stewart left, but he sure can play ... can't wait for Buddy Guy to show him up

I'm pretty sure Jeff Beck wouldn't let any guitar player on the planet other than Buddy Guy blow him away like that ... just ask Jimmy Page

Clarence gets into heaven based on the "Jungleland" solo alone

they're playing our song, but Robin's asleep

next up: The Shaggs sing "Respect" with Aretha Franklin

worst version of Our Song of all time

"Higher and Higher" was a good ending ... better than a jam session, that's for sure.

Posted at 12:20 AM in Bruce Springsteen, Music, Sleater-Kinney | Permalink | Comments (1)

This list is not complete … I’m guessing at a lot of this … but here are the artists who are 1) in the Rock and Roll Hall of Fame, 2) alive and healthy, and 3) weren’t on the HBO special:

Here are some of the artists who WERE on the show:

sitting in a motel in redding

Tomorrow I'll be home and I'll write something fascinating, I'm sure. Want to say something about seeing Conroy-Debrie last night ... that'll come.

It is apparent that everyone on the Internet spends the day after Thanksgiving posting about how much they ate the previous day. I'll avoid that ... It's too time-consuming typing on my Pre. Instead of listing foods I'll note the diverse group with whom we spent the evening:

A lifelong friend and his wife, musicians who we will see live tonight.

Her mom and his lovely ex-wife.

Two starving college kids who took home as much food as they had already eaten.

A riot-grrrl legend and a roller derby star.

And Robin. And me.

With a crowd like that, I hardly need to list the food we ate ... The pleasures of the holiday came from the company we kept. The only thing that could have made it better would have been if Neal, Sonia, and Sara had been with us.

Dinner won't be until late, so this is a lazy-afternoon tweet. Eventual dinner guests courtesy of our hosts, Dub and Anne, will include folks from the extended Debrie clan, and perhaps even another Rubio (one lives in Portland). Meantime, we enjoy the sounds of musicians rehearsing. 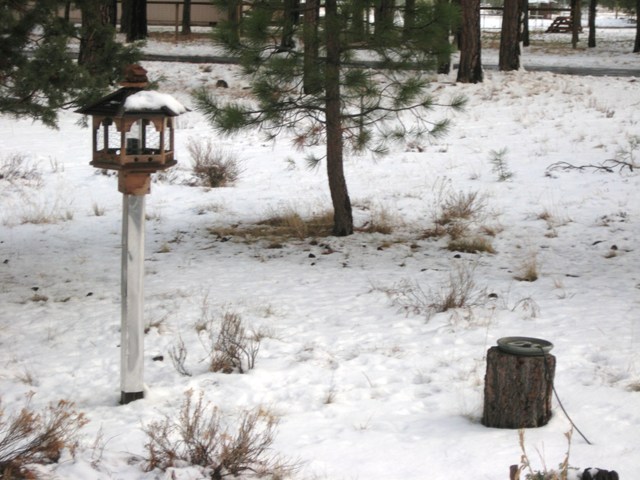 Robin has an image of what she calls "Berkeley Ladies." I know what she means, even if I can't describe them. It seems odd that we traveled this far from home, and then met a Berkeley Lady. But my sister has a friend who used to live a couple of blocks from us, and now lives in Sisters, and she came to dinner this evening, giving us the chance to finally meet her. She does both Berkeley and Sisters proud; it was a pleasure to meet her.

day on the road, night in klamath falls

We're visiting family and friends in Oregon this week, and today we hoped to drive to my sister's house (coincidentally, she lives in Sisters, Oregon). We got to Klamath Falls around 2:00, and after extended discussion with Chris and Karen, we decided not to chance the potentially icy road to Sisters. So we're spending the night in a motel in Klamath Falls, and will drive to Sisters tomorrow.

I am v. naive about this kind of traveling. It's our first visit to Sisters, and my unthinking assumption was that we'd drive up I-5 and take the Sisters exit. Sisters, of course, is far off of I-5 ... it's in the mountains. As I will find out tomorrow, Chris and Karen live in Nature. Robin reminded me that we traveled to Andalusia in November, back in '03 ... we've spent time in the mountains when I should have known better. And Sara reminds me that there were several Thanksgivings when she was a kid that we drove up to Portland (same friend we'll be visiting this time around). Still, Portland is I-5, so the part where you have to bring chains for your car and spend the night in Klamath Falls because of weather, that's new to me.

Our motel is functional ... Robin's been watching crap movies on SyFy all day ... and there's a Chinese restaurant attached, which was tasty indeed. Mostly, though, this is my typical boring tourist post. More tomorrow ... I know you can't wait.