Ten years ago today, the Giants played their last game at Candlestick Park. It wasn’t much of a game … the Dodgers won, 9-4. Not many in the crowd of 61,389 cared (they’ve never had that big a crowd, since … the new park holds 20,000 fewer fans) … we were there to say goodbye to one of the worst parks in baseball history. Julian Tavarez finished off his three years with the Giants by hitting two batters … he hit five batters in his last three games as a Giant, which is pretty remarkable, considering he only faced a total of 19 hitters in those games. The last play at Candlestick was Marvin Benard grounding out to the first baseman. After the game, we got someone to take this picture of us: 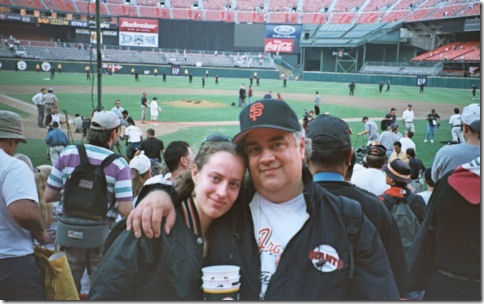 And here is the most historic moment I ever witnessed at a Giants game at Candlestick Park: