Tonight I attended my first no-hitter in 50+ years of going to baseball games.

In my crankier moods, and they are frequent when I’m watching the Giants, I’ve berated fans for giving out standing ovations too easily. A pitcher gets pulled in the sixth inning and he hasn’t stunk up the place, people give him a standing O. I always take that to its logical conclusion: if you give someone a standing ovation for a middling performance, what do you do when greatness occurs, throw yourself off the upper deck?

How goofy was this? After 8 innings, I texted my wife with an update. You need to understand, my wife doesn’t like baseball. She never goes with me to games, and about the only time she ever comments on the sport is when she passes by the teevee and sees someone with long hair … she inevitably says he needs a haircut. But I was on the verge of seeing something historic, and I knew that would matter to her, even though the actual event wasn’t of interest. Funny thing is, I assumed she wouldn’t even know who Jonathan Sanchez was … I’m not sure she knows who Tim Lincecum is … so I didn’t mention his name to her, but afterwards, when I sent one last text saying I’d just seen my first no-hitter, she replied by asking if the pitcher was our daughter-in-law’s favorite. Sanchez is indeed Sonia’s fave, but how my wife knew that was a mystery.

My brother was at the game with me, and he was feeling a bit down when he got to the park. As the Giants built up their big lead, it became evident that the only story left was the no-hitter, and my brother informed me that the minute Sanchez gave up a hit, he was going to leave so he could drown his sorrows at a karaoke bar. Well, I don’t suppose he’s sorry that he had to stick around for the final out.

Here’s a picture I took with the Pre as the team rushed the field after the game. There’s no zoom function, so it’s very much an upper-deck kind of photo, but it’s better than nothing and proves I was there: 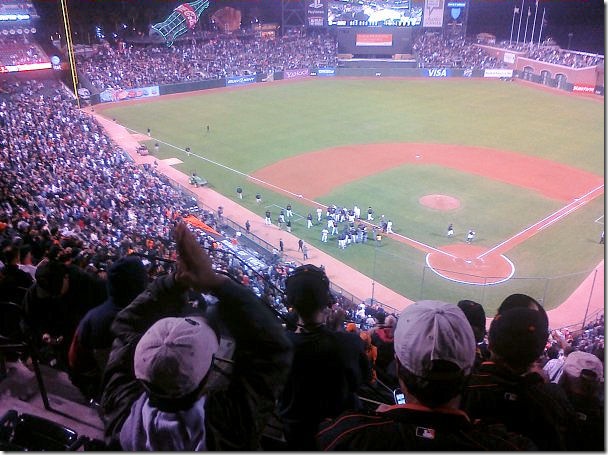 I’m still in shock, sort of like when the Giants won the Western Division in 1987: I knew what had happened—I just couldn’t believe what I’d seen.

What you probably didn’t know till after the game was that Sanchez’s family was in attendance. His dad had never seen him pitch in a big-league game before, at least not live. Can you imagine that? The first time you pitch in front of Pops... and you throw a no-hitter. Hell, I’m even in a mood to forgive Juan Uribe.

What a great memory to file with your other ones. I'm glad you and Geoff were there together.

It's a remarkable thing to get to witness and, in this case, the circumstances only seem to add to the grandeur. Congratulations.

Congratulations! Nothing like it, period! Saw Browning's perfect game against my Bums in 88 and Ramon martinez' no-no in 95. You'll appreciate that I was on my feet, cheering for the Reds and Browning in the last inning. Your favorite outfielder, Gibson, was tossed arguing a call in the early innings, but made up for it in the series.

Actually hit the game on Father's Day with a friend, his sons, and dad at the park for a great pitching duel between the G-men and Rangers. They handed out orange dress ties for dads and thought of keeping one for you...then realized I may have had to hand it to you to use as a noose at the end of summer. =)