have we finally found an american fanta de limón? 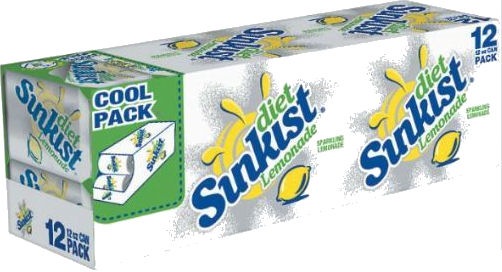 I've been drinking this stuff pretty much non-stop for a couple of weeks now, and it's good enough to warrant a post. Long-time readers know of my/our obsession with Fanta de limón, known in England as Lemon Fanta or Fanta Lemon or something like that, and, sadly, known in the U.S. as "huh?" To the best of my knowledge, Fanta de limón is not available anywhere in the States, and no one knows the reason. The local Spanish-food import store has Kas, a close second in my estimation, at around $2/can.

Well, something new has shown up on the shelves of our grocery store ... new to us, I believe it's been available elsewhere over the years. It's Sunkist Sparkling Lemonade (and a Diet version, as well!). Now, I won't know for sure until I taste Fanta in Spain this June, but if memory serves, this Sunkist stuff is the closest thing I've ever tasted to our beloved original. (And if you think I'm exaggerating about Fanta, go visit Google, and I'll see you here when you return. Fanta de limón is arguably the thing Americans miss most when they return home from Spain.)

There are caveats. Well, only one, really ... these drinks have caffeine, about 42mg per can, which is slightly more than standard cola drinks, about 2/3 of what you'll get in Mountain Dew, and less than half of what you'd get in a Starbuck's Tall Caffe Mocha.

Anyway, if you happen to see this post via the wonders of Google, and you aren't aware of Sunkist Sparkling Lemonade and/or Diet Sunkist Sparkling Lemonade, you owe it to yourself to give it a try if you find it in your neighborhood. (I tried a bottle of the non-Diet version, and it was equally good ... well, even better, of course, but if you don't want the sugar, Diet is the obvious choice.)

Try Frost zero calorie lemonade. Pretty close. I just came back from Spain and this is a good substitute.

I appreciate the tip! Will check it out.

I never heard of it either, so I'm guessing it's only produced for certain countries. Glad you could import some. :D