Looks like the Moniz Portuguese Sausage company is no more. The old guy who owned the place is going into a well-earned retirement. There are rumors that he passed the linguica recipe on, although I’ll believe it when I see it, and his sausage-making plant has been bought by some guy who is supposed to make great salamis. Hey, I’ll eat pretty much any linguica, but I was raised on Moniz, so this is a sad day for the Rubios … our grandmother used to get Moniz delivered to her house (other people had milkmen, she had a linguica man).

I bought one last package at the Spanish Table, and this morning, Robin and I killed it off with the standard eggs and toast. I made sure to commemorate the event: Grease in the pan: 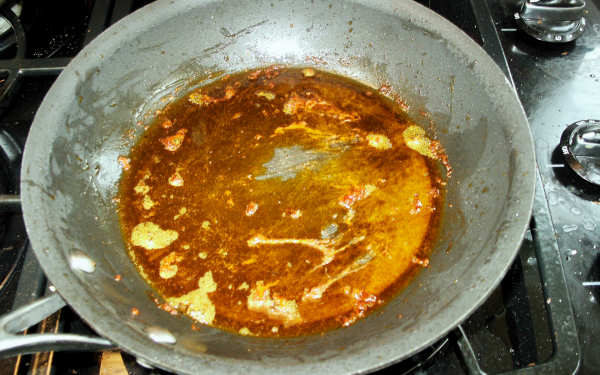 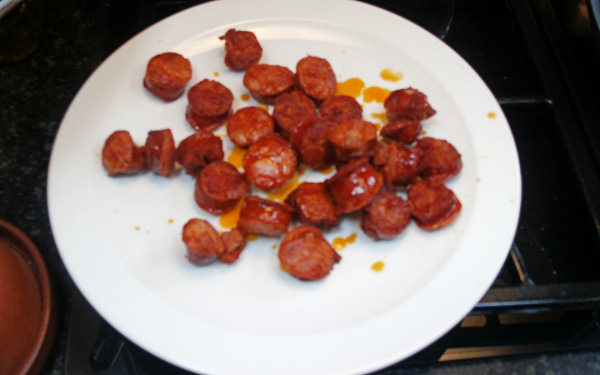 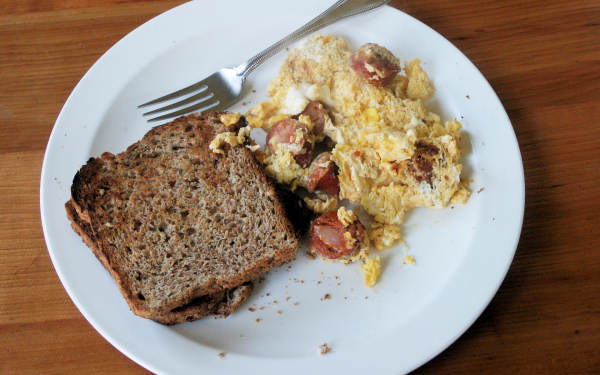 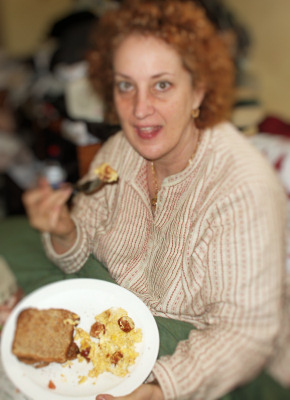 Great photos, and what a trip down memory lane to see the Moniz packaging!

i need to find something similar in taste i went thier as a kid now in my 30s and he closes down. if any one has an idea of were to find some let me know thanks

I was just thinking about the old days when I found this! It’s warms my heart to see how much our Sausage was liked. So just to satisfy your Curiosity, I am the eldest son of John Correia the Old guy you mentioned. My name is also John Correia (now 58 ). My great grandfather started Moniz Linguica in the 1930s we all worked in some capacity as kids and some through adulthood. We have never sold the recipe to anyone and believe me a lot of people have asked! I hold all the companies recipes to this day in a silver metal box handed down to me by my grandmother with the original writing from my grandfather. I myself went on to become a Sausage Maker for other companies but that is another story altogether… we still make 50 pound batches around Christmas time, we still make the Portuguese Sweet Bread too! If you remember we had a bakery also.

Thank you for the memories!

John, you can't imagine how delighted I was to read this! So glad to hear about your family, and so glad you found the original message. The topic first came up with an essay I wrote back in 1999, "Linguica and Me", which I have posted here:

Here is something I posted in 2003 as a follow-up ... it's also at the end of the above link (I didn't know at the time that your dad was also the owner):

I've gotten a couple of emails recently about the article I wrote four years ago about linguica. I hear from people every month or two about that piece, but getting two emails in three days seemed a bit much, so I googled "linguica" and "rubio" and found a link to Moniz.

Imagine my surprise (and pride!). So I decided to call the number in the listing, and next thing you know, I'm talking to a woman at Moniz. Turns out she knows who I am ... she found the article on the web and printed it out for everyone at Moniz, so they all know me, I guess. We talked for awhile, and then she asked if I could hold on a second ... I heard her talking to someone in the background, "I've got the guy on the phone who wrote that article!" ... and then this old guy picks up the phone, John Correia is his name, and his job is ... DELIVERY GUY FOR MONIZ!

So here it is, 2003, my grandmother has been dead for almost 20 years, it's been longer than that since I can remember the Moniz truck coming to her house, and ... I'm talking to the Moniz delivery guy and he remembers!

File this one under Small World, I guess ...

Steven, Thank you so much for the link! I remember just where on the wall you’re article was placed. Dad was really proud of that, he would show all his friends and say “ see… “ Moniz is Da Best!” Lol, he lived 1/2 his life in this country and never lost that HEAVY Portuguese accent.
I live in Tracy CA now and if you are within driving distance I would love to give you some Linguica when I make it around the holidays… feel free to contact me at my e-mail correia_john@comcast.net

Our grandmother came over from Spain in the 1910s and lived into her 90s. She had a thick accent until the day she died.