google is your friend

This afternoon, I was playing with my Treo (more on that in a second), and while fiddling with the network settings I did something wrong, and all of a sudden I couldn’t access the Internet any longer. Damn, I thought, I’ve only had this sucker for three days and I’ve already broken it. I went onto the “real” computer and did a Google search for “error:(0x7301)”, which was the error message I was getting on the Treo. Voila! I found other people with the same problem, found someone who understood what had happened and explained the fix, fixed the Treo, and was back in phone-online mode … all in less than five minutes.

Then this evening, I loaded the dishwasher and started it up. Only nothing happened. Well, something happened … the little green light in the front that means “Clean” started flashing. No matter what I did, the Clean light would flash. I couldn’t get the machine to wash the dishes, because it thought they were already clean. Google to the rescue once again. This time the Google phrase was “kenmore dishwasher 665.” The solution was definitely something I would never have thought of on my own. It seems my dishwasher has a little computer in it, and the computer needed to be reset. Resetting the computer required that I push the “heated wash” button, then the “heated dry” button, then repeat this “about” five times, after which all of the lights on the front of the machine would light up, and the dishwasher would go back to whatever it was you were trying to do in the first place. Another problem solved, also in under five minutes.

Google is your friend, if for no other reason than it makes it possible to solve many problems without having to contact the dreaded Customer Service Representative.

As for my Treo, it’s already my best friend. My computer tends to be my friend, anyway, and the Treo isn’t just my computer, it goes everywhere with me. Yes, it’s true what they say, you can read and answer email on the toilet with your Treo. I’ve posted to my blog, done email, checked on the 49er game, surfed the web, synced my appointments and notes and tasks from Outlook, played a few MP3s, watched a coupla streaming videos on Sprint TV, had AIM and GTalk chats … and, of course, I crashed the sucker. More than once, actually … the Treo resets itself on occasion, and I usually have to perform a soft reset every few hours. There is a lot of software for the Treo (Palm OS) … the Treo doesn’t seem to like the software, though.

Oh yeah, I’ve made the occasional phone call, too, although I knew when I got it that the phone functions would be my least-favorite parts.

Today I took a picture of myself with the phone. Then I emailed it to Robin, with a text message and an audio greeting. A stupid waste of bandwidth, to be sure, but I had to try it at least once. Here’s the picture: 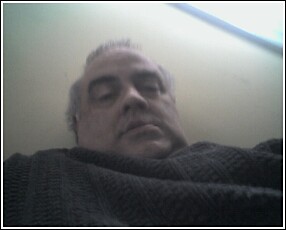 My latest Google test came when we couldn't remember which way to have our ceiling fan turn in the winter to push the heat down. A few seconds after my Google search, I found my answer!

you are a genius. thanks for the info. It saved us big bucks. MBL

If is unfortunate how many people still don't utilize google as much as they should.. almost like they perfer to ust be told what to do rather than finding the info themsef, thinking it is the easier route when in actually is the other way around.