In the latest batch of scans Tina sent me was an article in the Antioch Ledger from Nov. 13, 1969. I'll try to post the pictures that appeared in the article, and then quote some of the text, since it's hard to read if I make the files small. It's an article about a place called the Rap Center, which I'll explain in another message. Here's a taste. First, a photo, then the caption: 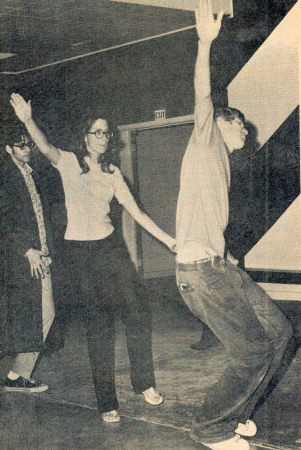 The caption reads "FLYING, BUT NOT HIGH -- Teenagers appear to be 'freaking out' but are actually dancing during a Saturday night session at the Rap Center on Sixth St." This is pretty hilarious, since, while I can't speak for any of us at this particular "session," the Rap Center was well-known as a place for folks to get blasted out of their minds ... the single largest dose of LSD I ever took in my life was consumed at this place. The dancers (not freaked-out teens!) are me, Ann, and Michael.

This picture is priceless!