Don't know why, exactly, but this picture of our friend Paula from, as usual, 1970 or so, makes me think how young we were: 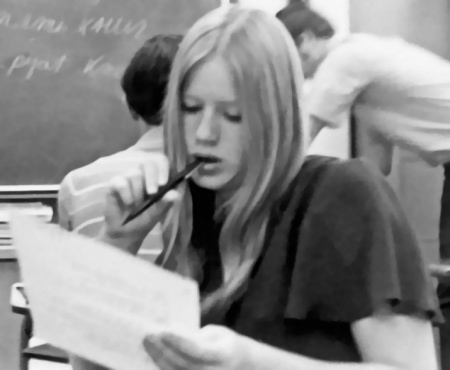 Now that I think of it, we were young, Paula and I in particular ... she's one of the only people I can remember who skipped a grade like I did, meaning we were a year younger than the other people in our class (Robin was a grade behind us, and so she was the same age as us ... Paula was probably only 16 in this picture, 17 tops).

The other thing I think of when I look at this picture is that Marianne Faithfull seems to have gone to Antioch High ...

Yep, it's been 17 years since the Giants last won the World Series. What, you didn't know about that? Well, it's true, it just hasn't been noted in the official record book yet.

I mean, I'm hearing from all these people who think that the entire performance of Barry Bonds should be expunged from the record books because he's a cheater who used performance-enhancing drugs. What's fair is fair. In the 1989 World Series, Jose Canseco hit .357 with a homer, 4 walks, 3 RBI, and 5 runs scored. Mark McGwire chipped in with a .294 average. Clearly, the A's victory in that Series should be expunged from the record books. All hail San Francisco, the 1989 World Series Champions!

Jon Carroll has some important things to say about conspiracy theories. In the process, he puts it far more clearly than I, which makes me very happy, because I've been trying to explain myself on this for years.

This Sept. 11 conspiracy theory -- who really blew up the World Trade Center, and how? -- is gaining traction. I've tried to follow it. I was around for Kennedy assassination theories, and I really followed those ... the questions dragged on, and there was testimony on technical issues that I was not remotely competent to judge, and in the end, people believed what they wanted to believe, or were told to believe, and Jack Kennedy was still dead, the Vietnam War was still going on, protesters were still getting beaten or shot, and the pieces for the neo-con coup were beginning to come together. It was all happening out in the open. There were conspiracies, but they were not secret conspiracies....

They're gonna be on the season premiere of The Henry Rollins Show on IFC. It airs at 7:00 PM Saturday night on the West Coast. Meanwhile, there's a clip of S-K singing "Jumpers" on the show's website. Camera work is nice ... for once they don't forget to show Janet. And you don't have to put up with cutaways for dialogue, like happened when they sang it on L Word.

1. A Girl Called Eddy, "Somebody Hurt You." A mood-creating opener, although whether or not you want to be in this kind of mood is questionable.

2. Earth, Wind & Fire, "After the Love Has Gone." OK, what's up with the theme of these first two songs?

3. John Fogerty, "Fortunate Son." A recent live version. V.hot ... great song of course, and he rips right into it.

5. R. Kelly, "Trapped in the Closet Chapter 2." In this chapter, the pastor husband reveals himself. "Well since we’re all coming out the closet, I'm not about to be the only one that’s broken-hearted.”

8. Van Morrison, "Have I Told You Lately." Live version of a sappy classic.

10. The Who, "Magic Bus." Studio version of psychedelic rock classic.

a night to remember

A Night to Remember is a 1958 British retelling of the voyage of the Titanic. It is very similar to James Cameron's Titanic ... similar, if you take away the gargantuan special effects and the fictional stories of the characters played by Leo and Kate et al. Which is to say, it's not v.similar at all. Because the love story is the heart of Titanic. Take that away and you have a different movie. A Night to Remember takes a more documentary approach ... very few particular characters stand out, it's more about the community of people in danger that strikes the viewer. This movie also manages to make its points about honorable actions and class distinctions without clubbing you over the head a la Cameron. I love Kate Winslet as much as anyone on the planet, but if I'm watching a movie about the Titanic, I want to see a movie about the Titanic. A Night to Remember is that movie.

How much to I need to say in advance about Cocksucker Blues? I have a tendency to think everyone knows everything I know, except sometimes when what I know doesn't match up with what I assume is the knowledge of the people to whom I'm talking. So I'll offer context in the next paragraph ... if you don't need context, skip two paragraphs down.

Maybe I'll do this chronologically. 1969: Rolling Stones tour America, ending at Altamont, ultimate bum trip of hippiedom. 1970: Mick Jagger writes a song, "Cocksucker Blues," and submits a demo to the Stones' label to complete their contract. Label refuses to release song. Also that year, Gimme Shelter, a cinéma vérité film about (among other things) Altamont, is released. 1972: The Stones release the last great album of their astonishing early period, Exile on Main Street. Christgau accurately calls it a "fagged-out masterpiece ... Weary and complicated, barely afloat in its own drudgery." Subsequent tour of America is filmed by Robert Frank, who ends up with another cinéma vérité film, this one documenting all sorts of "horrors" ... drugs and groupies and the like. The Stones sue to keep the film from being released, and in an odd settlement, it is ruled that the movie can only be shown once a year with Frank present for the showing. For this reason, the film has only rarely been shown, although bootleg copies are available.

Everyone back now? The Frank film (pun partly intended) isn't quite everything you expect. Sure, Truman Capote and Andy Warhol and Lee Radziwill show up, but only for one scene that lasts less than a minute. Yes, it shows the dreary nature of a rock and roll tour when the band isn't on stage, and yes, it makes its point about that dreariness, but, perhaps inevitably, the movie itself is nothing more than dreary during these segments, which feel endless and take up the lion's share of the film. Yes, the film comes to life during the all-too-rare concert sequences, which take up only about fifteen minutes of the movie (one highlight has Stevie Wonder and his band joining the Stones for an "Uptight/Satisfaction" medley). And yes, people shoot up on camera, and if they don't exactly have sex, they spend a lot of time on camera preparing to have sex, which may be the same thing for these people. And yes, Keith Richards and Bobby Keys throw a television off the balcony of their motel room, and yes, it seems staged, and yes, so do the drug scenes and the sex scenes.

What does it all mean, you ask. I think Cocksucker Blues accomplishes what it sets out to show: that the rock and roll life is sad and boring, that even the decadence is boring, that the only time the artists are alive is when they are on stage. It's like a zombie movie. But to make his point about boredom, Frank gives us a boring movie. It's not just a zombie movie, it's a dull zombie movie. And yes, that's Frank's point, but it means Cocksucker Blues works better when you read about it than when you actually watch it.

If you want to experience a work of art about the blasted world we live in, from the point of view of rich rock stars around the age of 30 who probably realize they are about to fall from their artistic peak even as they become ever more popular, listen to Exile on Main Street. If you want a taste of the staged tawdriness Frank is after, hunt down that recording of "Cocksucker Blues," which plays in the background of an early scene in the film but which needs to be heard on its own. And if you really want a hint of the future of the young-but-aging rockstar, go watch Performance.

I was going to write a post about what happened 25 years ago today, when me, my brother David, and his then-wife Bonnie went to see Prince at a little club called The Stone in San Francisco. Then I realized I'd already written it, about 2 1/2 years ago. So here I am, linking to my own blog: ...

Just looking over this week's playlist, and some of the new stuff, at least new to my eye, includes Albert Collins, Albert King, and B.B. King ... Delaney & Bonnie, Flo & Eddie ... the Everly Brothers covering "Peggy Sue" ... Graham Central Station ... H.P. Lovecraft ... Miles Davis, the Sons of Champlin, and Paul Butterfield doing "East/West" in 1966 ... the Persuasions, and Tower of Power with "You're Still a Young Man." And lots more.

These are kinda neat, I guess. First is a photo of me with my friends Tom and Michael, taken as most of these have been around 1970. We're down by Ghirardelli Square in San Francisco: 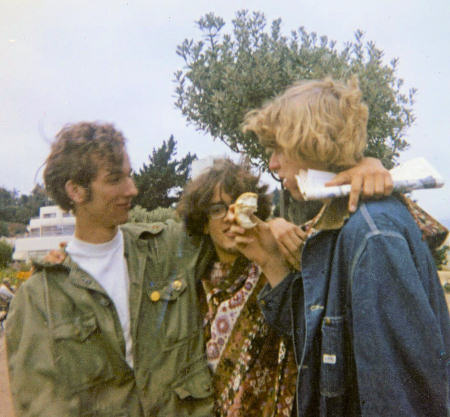 A few years ago when Michael, now Dub, was in town, we invited Tom over and took the following picture, which was meant to recreate the photo above (a photo that I remembered but hadn't seen for decades until Tina sent it to me this morning): 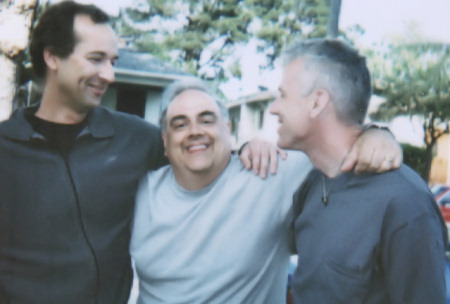