One example of my obsession with the music of 60s FM "underground" radio is that I have constructed an ever-growing Musicmatch playlist featuring the songs of that time. It's currently up to more than 87 hours of music. I put it on shuffle play and enjoy.

But I'm stymied by my attempt to recreate the past. Part of it is the missing DJs ... I don't mind the absence of ads, but it would be nice to have the voices of those days as part of the show. But even weirder is that the music sounds too good. I spent most of the 60s listening to the radio on little mono tabletop models barely bigger than a book, not to mention the station didn't always come in very good. When I listen now, with my subwoofer booming, it's not the same. Same songs, but not the same sound. And it never will be, of course.

Here's a bonus Friday Random Ten from my "FM" playlist:

1. Donovan, "Sunny South Kensington." Donovan's reputation as a folkie Dylan wannabee who transformed into an insufferable hippie mystic leaves out his most intriguing period in the mid-60s, when he made mod/rock albums that still sound great today.

2. Led Zeppelin, "Friends." While Led Zep's reputation as the uber-metal band ignores their acoustic folkie side.

3. The Sex Pistols, "Holiday in the Sun." There is nothing folkie or hippie or acoustic about this one.

5. Elvis Costello & the Attractions, "Fish 'n' Chip Paper." I confess that I often find my mind wandering when listening to EC, except for This Year's Model.

7. Kasabian, "Reason Is Treason." One of those "I like it but have nothing to say about it" tracks.

8. Ian Hunter, "Good Samaritan." A few years ago, Hunter delivered an album that was one of the best ever by a geezer, somehow managing to sound like an old crank yet still retaining a youthful anger, kind of a 21st century male version of Broken English. It bombed.

10. The Impressions, "Meeting Over Yonder." The closest my collection comes to religious music.

picture of the day Thing to remember is, Letterman gets a lot more viewers than someone like Jon Stewart:

Just a Big Bowl of Bad

The new playlist is up. Earliest song is the Great Society, Grace Slick's pre-Airplane band, doing "Father Bruce" at the Fillmore in '66, latest is the Dead with "Samson and Delilah" from the closing of Winterland show on New Years' Eve of '78. Two Bruce songs, "Spirit in the Night" (Berkeley, '73) and "Streets of Fire" (Winterland, '78). Playing as I was typing this: Mick Ronson with the Rolling Thunder Revue at Madison Square Garden in 1975 doing "Life on Mars?"

If you type "vault radio" into Google, the 4th hit is the blog entry I wrote just a week ago about Wolfgang's Vault, which features streaming audio of concerts from the vast collection of the late Bill Graham. As I type this, for instance, I'm listening to Led Zeppelin doing "How Many More Times" from a 1969 concert at Fillmore West where they opened for Country Joe and the Fish ... now it's Elvis Costello and the Attractions at Winterland in '78 with "I Don't Want to Go to Chelsea." The sound is fine, the music excellent, and they promise to change the setlist once a week. It's a great website.

back in the day

Here's a photo of me from the mid-60s ... the original is here on Sue's site, it includes four of the Rubio siblings and is worth seeing on its own, but I cut everyone else out for this version so I could get the closeup while still keeping the file size down. Sue thinks it's around 1967, and I think she's right ... that would make me 13 or 14: 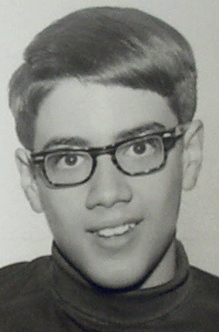 s-k in the house

And, as if The L Word appearance wasn't enough ... Sleater-Kinney return to San Francisco in May, two nights at the Great American Music Hall. We've already got our tix for Night #2, might go the first night, too, not sure.

A photo album with pictures of our trip to Bremerton can be found here, or via the link on the left side of the screen under Photo Albums.

another fifteen minutes of fame

Henry Schulman has a piece in Sunday's Chronicle on Giants' general manager Brian Sabean that includes a few quotes from yours truly.

As always when I'm quoted, I worry about the accuracy of the quotes, even though what I really care about is that my name is spelled correctly. Schulman, a good writer, doesn't misrepresent me. I might wish the article as a whole took a different approach ... I'm mostly there to be the unbeliever who is off the mark ... but it's a fair expression of my opinion, given the parameters of the article.

I'm described as "a 52-year-old college English professor from Berkeley," which is true, and then my expertise is established by noting I've written about Sabean in the Baseball Prospectus. I know why Henry included this ... he has to justify quoting an unknown English teacher, after all ... but since I no longer write for BP, I feel a bit funny, since it might appear that my comments reflect current thinking at the Prospectus, which may or may not be true.

Anyway, Schulman then quotes me on two points, which are indeed accurate ... that I think Sabean "clearly has a blind spot about on-base percentage" and that I believe Barry Bonds is the primary reason the Giants have been successful in the Sabean era (duh, I know), but that I, at least, don't believe Sabean should get credit for Bonds, who was with the team before Sabean took over as GM. I note that last year, played mostly without Bonds, was a bad year for the Giants and Sabean, evidence in my mind of what a mess the team will be like when Bonds is gone but Sabean remains.

That Henry follows this section with a refutation of my argument is fair, but it's also an example of how I'm in the piece only to provide an opposing view to dismiss. Still, it's important to note that one reason Schulman is good at his job is that he would bother to even address opposing views ... sportswriters, especially beat writers, are too often just extensions of a team's PR department, which does not describe Henry Schulman.

I do get the last word in the article, although again, it's to demonstrate that I'm wrong. I note that most fans think Sabean does a good job, and add "with that record, why shouldn't they?"

In any event, it's fun to see myself inserted into the discussion at least, and I'm grateful to Schulman for contacting me pretty much out of the blue and giving me a chance to say my piece.