I'll explain this as if my readers don't know much about baseball.

The Giants picked up a player last summer, Randy Winn, who did well for them. They had an option to extend his contract into this season, which they happily did. So far so good ... Winn isn't a great player, maybe a bit above average at best, but he doesn't stink yet, and he'll be useful in 2006.

Winn turns 32 this year. Most baseball hitters are in decline by the time they reach their 30s ... a hitter's prime, in general, is from about the age of 27 through the age of 30. So while Winn should be a decent player this season, the odds are he'll fall below average soon afterwards. Which is no big deal ... the Giants can use him for 2006 and then let someone else worry about him, right?

Today, Brian Sabean, the general manager of the Giants and the man who got my name in the Chronicle recently as the one voice claiming that the emperor has no clothes, just extended Randy Winn's contract another three years, to 2009, for more than $23 million. That's $23 million for the time when Winn is aged 33-35 and is liable to be a below-average player.

If you don't follow baseball, you'll have to take my word for it: what Randy Winn is likely to produce during those three added years will be worth a lot less than $23 million. But there he'll be, another albatross around the financial neck of the Giants, and Brian Sabean will say "I wish we had more money to spend, but we don't," never realizing that the primary reason there is no money is because he spends $23 million for mediocrity.

One reason I've been relatively quiet of late (and haven't been posting movie reviews) is that I'm finishing up my essay on Bond Villains ... it's due tomorrow, and I feel like I don't really have "it" yet.

But in the meantime ... I got contacted by the publishers, and they've asked me to write an essay for an upcoming book on ...

The Pew Research Center has done a study on happiness in America. Among their conclusions:

And yes, the pope is Catholic.

i don't know, i think barry's prettier as a guy 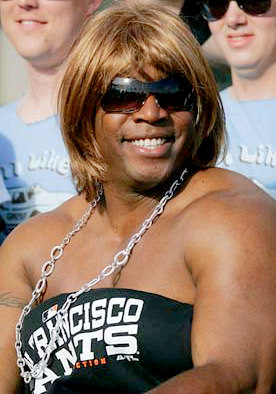 The new playlist is up (every Tuesday). Earliest song is once again the Great Society at the Fillmore, this time doing "Somebody to Love," latest is once again the Dead, from Shoreline in '88, with "The Wheel." Three Bruce songs this time around, "Lost in the Flood" and "Bishop Danced" (Berkeley, '73) and an immortal "Backstreets" from Winterland '78. Besides Bruce at Winterland, there are a couple of others from shows I attended: the Sex Pistols at Winterland ("Anarchy in the U.K."), and two by Lynyrd Skynyrd from a Day on the Green in 1977, one of which is playing as I type: "Freebird."

A Scanner Darkly was Philip K. Dick's last great novel, the only one outside of his fertile mid-60s period that could arguably be considered his best. The movie version is finally due this summer, and I have great expectations for it. I am not one who has been impressed by the Dick work that has made it to the screen so far ... Blade Runner is the most highly regarded, of course, although I'm not a big fan of that one ... I suppose I'd put Minority Report at the top, along with parts of Total Recall. But for the most part, movies have failed to get the essential psychedelic experience of reading PKD on the screen.

Which makes it ironic that A Scanner Darkly, Dick's powerful anti-drug novel, looks to be the one that finally gets it right. I'm making these statements based on very little information. The movie is being done by Richard Linklater, who has made some very fine films in his career, and he uses the same rotoscoping technique he featured in Waking Life. It seems like the perfect style for a Dick novel-into-film.

And then there are the trailers. Here's a link to one of the most recent ones ... Robin, this one has the aphids!

I haven't looked forward so much to a movie in many years.

Guess there'll be one less attendee at this year's Rock and Roll Hall of Fame induction ceremonies: 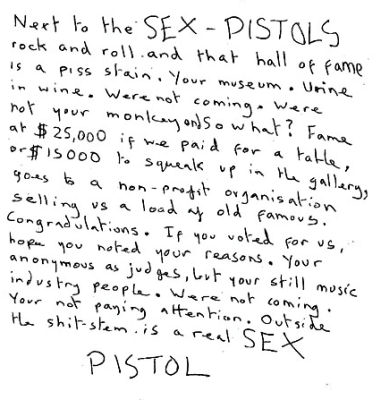 One more BSG thing. This is Tricia Helfer: 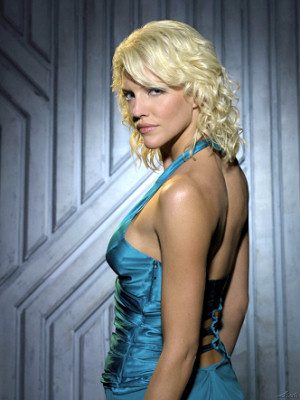 Helfer plays a Cylon-in-human-form. She's gorgeous, and that doesn't mean she can't act, but you figure she got the job for her looks. And her resume doesn't suggest otherwise ... Victoria's Secret model, moved to Ford Agency and was named Supermodel of the World, calendar girl for Maxim, played Farrah Fawcett in a teevee movie about Charlie's Angels. And for most of the series, she has been required to be gorgeous ... oh, she has to act and she's not bad at it, but you get sidetracked by her looks.

Except ... one thing about these "humlons" is that there are many copies. So far, off the top of my head, we've seen three different versions of Helfer's "Six." And each one is different, and Helfer pulls off the various versions, and the truth is, Tricia Helfer is doing one heckuva fine acting job on Battlestar Galactica. She's not the only person on the show who can act ... from the big stars like Edward James Olmos and Mary McDonnell to rising stars like Katee Sackhoff, some excellent work is being done here. But I get the feeling Helfer's work is going unnoticed, because she's on a science fiction show, and because she looks like she does. No need to feel sorry for her, but she's good.

Tonight episode of Battlestar Galactica demonstrates a problem with series that feature ongoing plots rather than standalone episodes: it was one of the best episodes of the series yet, a candidate for best episode ever, but I can't say to newbies "go download it on iTunes and see what the fuss is about" because it wouldn't make a bit of sense if you hadn't been watching all along.

The various fulcrums from which the show constructs its universe include the political (government) and military, and the philosophical (religion, but also an analysis of the true meaning of humanity). Those are big themes ... the show could easily be overwhelmed in "importance." It manages to be entertaining nonetheless. But an episode like tonight ... and I'm avoiding spoilers, these days there's no telling when someone is watching a particular episode ... well, after a few episodes that did little more than tread water, here comes one that offers an entirely new way of looking at what happens in the Galactic universe, and does it without seeming off-the-wall change-for-the-sake-of-change. There were several points during the episode where you just wanted to say "whoa" and pause the DVR to take in what you'd just seen. It was great teevee.