This is a day early, but we had the dinner party tonight, so I'm gonna talk now.

My son Neal turns 30 tomorrow. This isn't about me, but I can't help thinking back to when I turned 30. I hadn't accomplished much ... already had two great kids, but their greatness had little to do with me, I'm afraid. Neal and I share a lot of qualities, but his life at 30 couldn't be more different than was mine.

I was miserable in a shitty job, and had very little prospects for anything better ... I assumed I'd be working in a factory until I died. I had a wonderful family, but I was too self-absorbed to really appreciate them. Neal, on the other hand, has a job ... I won't say he likes it, exactly, we'd all like to just goof off, but he is very good at his job, so good that there's always someone trying to lure him to their own businesses to work with them. He gets and deserves respect from the people he works with.

And he's got a great wife in Sonia ... they make the best couple ... they seem to take life on as a team, and I'm all for that.

What I'm trying to say is, I know I should feel old, having a son turning 30, and I imagine Neal is feeling old, since he's the one who is turning 30. But I don't find myself feeling bad ... how can I feel bad, when I've got a son that I am so proud of?

Here's a picture of the two of us, taken by my brother this evening: 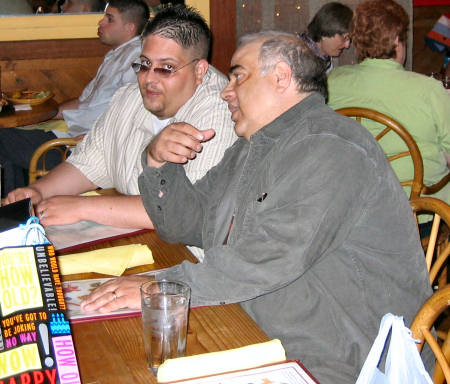