At various times over the years of this blog, I've updated everyone on my health, in particular my blood test numbers. On January 22, 2002, my cholesterol was 243 and triglycerides 306 ... I noted that the previous numbers had been 256 and 366, so those were actually an improvement, if not exactly optimal (triglycerides, for instance, should be under 199). And all of those numbers were better than what I was back in the days when I didn't take hella meds ... I can recall triglyceride numbers in the 600s, for instance.

These numbers have improved in recent years, though, perhaps because I take lots of pills ... I certainly not in any better shape. But no, that's not it ... I do take lots of pills, five prescriptions for my blood pressure alone, but I only take one thing for cholesterol (Lipitor) and only megadoses of Omega-3 fish oil pills for the triglycerides.

Nonetheless, I had tests done this week and ... my cholesterol was the lowest it has ever been in memory (at least ten years, we looked it up), an astonishing 136. The standard line is that under 200 is desirable. My LDLs (bad cholesterol) are 69 ... optimal is under 100. Meanwhile, my triglycerides are at 144, "normal" being under 150.

I wish I knew what I'd done lately to improve those numbers ... I'd keep it up. But I have no idea, so I guess I'll just keep doing whatever it is I don't know about.

it ain't rock and roll

Those of us who participated in, or at the least had an affinity for, the mid-70s punk movement had the sense that the world had been split. Yes, we were grandiose ... it wasn't just the music that had suffered a fissure, it was the entire world. I suppose this came in part from the 60s notion that pop music was somehow part of a revolutionary movement ... many older punk fans still bought into this, and young fans had been raised on it, even if it was what they rebelled against. As I wrote 12 years ago (12!):

Many of us who believed in the notion that rock and roll represented liberation welcomed punk with open arms in the late 70s. Our music had gotten too cautious, too worried about the bottom line; punk rock was for us a return to the rebellious roots of rock and roll, filtered through Iggy and the Dolls and stamped with intentional ugliness. Many of our contemporaries took one listen to the Sex Pistols, or the Ramones or Flipper or whichever band first interrupted their contemplations, and decided in a seeming instant that it was time to grow up. They changed the buttons on their car radio from 'underground' stations to oldies, classic rock, and Tom Petty; they might tolerate the so-called New Wave, but they weren't about to listen to a group called the Dead Kennedys. Those of us who embraced punk adopted the sneer of the Rather Ripped clerk: we had seen the future of rock and roll, and it was playing on college radio, not KFOG. In distancing ourselves from the oldies fans, we thought we were placing ourselves in the forefront of the elder statesperson wing of the New Rock and Roll.

The split I describe above never happened ... as I wrote at the conclusion of that paragraph, "We perhaps never noticed that punk wasn't the beginning of a new era, but the end of an old one." I don't suppose Flipper will ever be a mainstream oldies act, but most of those Tom Petty fans learned to love the Ramones a long time ago, as anyone who attends sporting events in America knows. Punk Rock was just another step in the history of rock and roll; there was no split, at least not in the music. (The world can wait for another blog post.)

But that split did occur, a few years later. Rap music changed everything. Over the last few decades, pop music has largely become hip-hop music ("hip-hop" being the New Wave to rap's Punk, the more commercial and wide-ranging variant of the original). Other musics have their periods of popularity ... country music is often where this happens ... but hip-hop culture is pop culture anymore. The changes we imagined were happening with punk really did happen with rap/hip-hop.

And the musical fissure also occurred. Aging boomers may have come to appreciate the Ramones, but it would seem unlikely that fans of Frankie Beverly are falling over themselves to download the latest from 50 Cent. Hip-hop musicians often look backward, as sampling homages make clear, but the reverse isn't necessarily true.

I've been thinking about the above in the context of 21st century radio. Partly in reaction to the fragmentation of the radio dial (you can hear more kinds of music than ever, but each segment gets its own station, and you never hear more than one kind of music on a particular station), partly because of the increasing ubiquity of MP3 players and Internet radio, you find more and more radio stations (I use the term in the broad sense that includes the Internet) that try to encompass a broad spectrum of music, over the eras if not so much between genres. So you get stations like Radio Paradise, who in the hour prior to my posting this played music by David Bowie, Nick Drake, Radiohead, Richard Thompson, Air and Venus Hum ... its current "top ten" includes new stuff by Beck, West Indian Girl and Kasabian, while their "Classics" charts are topped by the Beatles, Simon & Garfunkel, Pink Floyd, and Otis Redding. This reflects another 60s relic, one borrowed from Top 40, that you should be able to hear everything on one station, Air and Otis Redding alike. Stations like Radio Paradise are evidence that punk didn't create a real fissure ... Beatles fans can find a lot of new stuff to enjoy, and are hungry for stations like Radio Paradise that provide it all.

But where is the "black music" equivalent of Radio Paradise? It's entirely possible it exists and I've missed it ... I'm a 51-year-old white guy raised on rock and roll ... but I haven't found it yet. A station that plays rap and hip-hop, and Motown and Muddy Waters, 70s funk and Jay-Z, Sister Rosetta Tharpe and Missy Elliott. Such a station, I'm guessing, doesn't exist because of the fissure that rap created ... the people who liked Diana Ross never warmed to Christina Aguilera.

I can see all sorts of flaws in what passes for my "theory." The Radio Paradises of the world may mix Beatles and Beck, but they don't play Sleater-Kinney ... there's a limit to how far boomers will go. And on the other hand, there is still plenty of contemporary music for old soul fans ... "urban contemporary" leads the mainstream. I'm not trying to claim that all white boomers love Air, or that no black boomers love Mary J Blige. I'm just wondering where Black Radio Paradise is.

In the meantime, play-every-song-ever-recorded subscription sites like MusicMatch On Demand and portable MP3 players allow us to create our own radio stations, which I suppose is the solution to my problem. Here's the last ten songs I listened to while composing this post, for instance:

Three years ago today, I had one of the proudest days of my life, as I conducted the wedding service of Neal and Sonia. Happy anniversary, guys!

So, am I shallow and/or intolerant, because I have plenty to say about teevee or my kitchen or what's playing on my Karma, but I have little or nothing to say about a new Pope?

Time for a teevee post ... we like teevee at this blog. Lots of shows are coming to the end of their season, and I'll have a wrap as each one finishes ... Deadwood and The Shield are getting interesting, House is happily retaining its misanthropy, Joan of Arcadia is dying a slow death ... and, remarkably, the last two episodes of The L Word have actually been decent.

This is still a very flawed show. The subplot with the heterosexual male voyeur is doing nothing for me, it would be nice if the tennis player actually picked up a racket once in awhile (or at least added a few muscles to her thighs), Pam Grier is wasted, and Jenny, last season's winner of the Most Obnoxious Character on Television award, is getting better as a character but remains completely worthless as a writer (based on what we're shown, anyway) and thus not nearly convincing enough as the dark and troubled one.

But Jennifer Beals has been excellent, the hot pregnant lesbo sex was ground-breaking, Shane's questioning of her lifestyle feels authentic, I still can't get enough of Alice, and the core relationship between Bette and Tina is more interesting than it has been for awhile. And the end of last week's episode, where all the gals showed up at Bette's house to declare their loyalties, was the best scene in the two years of the show ... for once, we got a true sense of the community of friends, something that Queer As Folk pulls off half-a-dozen times per episode.

Two episodes don't make a season, but I'm more optimistic about L Word now than I have been in the past.

They're working! Here's what our kitchen floor looks like right now: 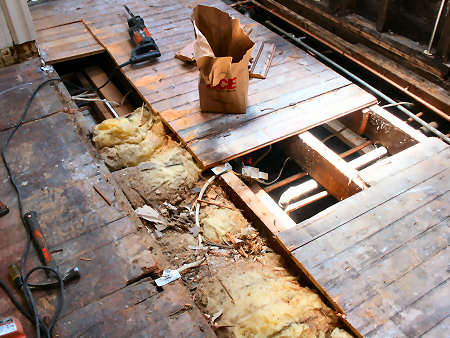 A friend of mine posted a rant called "Fuck TV" on her blog the other day. I don't think this is what she meant.

i am what i hear

The Chronicle has a piece today about analyzing people based on their iPod playlists. I suppose you can learn everything about me just knowing I have a Karma, not an iPod, but in the spirit of the article, here's a ten-song playlist I just called up on my Karma by using the Random function. You figure out what it says about me.

And so we get back to our regular lives. The new hot-water heater is installed ... I took a nice long shower this morning! The house is still a shambles, with kitchen-in-living-room and stuff crammed into every possible corner that isn't the kitchen, but it'll get good soon. Meanwhile, here's one last picture of the squirt who gave us so much pleasure this week: 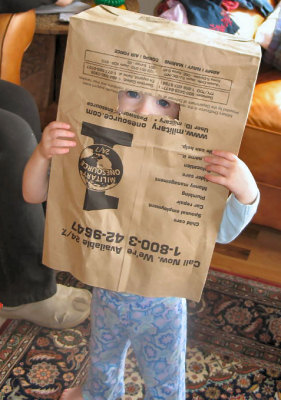 While we were gone, the guy who is supposed to have done our kitchen floor did nothing other than feed the cats.

The plumber installed the pipes for the kitchen and took out the old water heater, but he didn't install the new one. So when we got home tonight, we had no hot water. And, as Robin found out when she tried to flush the toilet, all the water was turned off ... we don't just have no hot water, we have no water, period.

So for the last couple of hours we've been sitting around while a guy installs our water heater.