On January 20, I posted an update on my kidney stone situation. It was a post like any other, or so I thought.

On March 1, someone named Milton posted a comment. Whenever you get a comment long after the fact, the first suspicion is Comment Spam ... those spammers don't care what message they attach their stuff to, and no one had found my stone update worthy of comment for almost a month and a half. But Milton was genuine ... he, too, is a kidney stone sufferer.

On March 25, "Bob" stopped by, looking for info. Why he would ask such a question on my blog was odd, but what the heck ... now my post had two comments.

And so on and so on and so on ... until, by year's end, my little kidney stone update had gathered a record-for-Steven 33 comments! Eventually, I felt obliged to edit the original post to warn visitors that I wasn't a medical doctor and they shouldn't take my blog as a place for serious medical advice.

I have no idea why my blog has become a site frequented by stone sufferers. At first I thought perhaps a search engine like Yahoo! had picked up on my post, but if that was true, it isn't any longer ... I just typed "kidney stones" into both Yahoo! and Google and my site was nowhere on the first pages.

So it will continue to be a mystery. In the meantime, here's a tip of the cap to the Blog Post of the Year!

I'm finally getting a handle on the actual stats for my Karma. So I know that my #1 song has been played 9 times, the last time being December 8. I can use this to adjust the Top Ten rankings a bit, which gives me a new #1 (last month's rankings in parentheses):

Falling off the list are Bruce Springsteen ("Glory Days") and Donovan ("Riding in My Car (Car Song)").

And in the tradition, here is #51: Lucinda Williams, "Blue."

A non-scientific belief system, especially one that is based on any kind of notion of a divine order, has some explaining to do, however. What God sanctions an earthquake? What God protects against it? Why does the quake strike these places and these peoples and not others? What kind of order is it that decrees that a person who went to sleep by the edge of the ocean on Christmas night should wake up the next morning engulfed by the waves, struggling for life?
-- Martin Kettle

"I know. I'm sorry. But weariness is a kind of madness. And there are times when the only feeling I have is one of mad revolt."

"I understand," Paneloux said in a low voice. "That sort of thing is revolting because it passes our human understanding. But perhaps we should love what we cannot understand."

Rieux straighted up slowly. He gazed at Paneloux, summoning to his gaze all the strength and fervor he could muster against his weariness. Then he shook his head.

"No, Father. I've a very different idea of love. And until my dying day I shall refuse to love a scheme of things in which children are put to torture."

beat me beat me

What is seen on the screen isn't half bad, if not as good as, say, the recent remake of Dawn of the Dead. The sadism (and basically everything else in the movie) is so overdone it actually gets a bit boring by the time "they" are pounding the nails into Christ's flesh. There's even concrete evidence of the existence of God: how else to explain the beauty of Monica Bellucci, than by bowing to the Creator who made her? Five on a scale of ten (point deducted for socio-cultural creepiness).

More than a year ago, some friends and I got into a terrible argument that had the movie In the Cut as part of the discussion. One problem was that I hadn't seen the film.

Well, I just watched it. With some trepidation, I admit ... I have no desire to relive that argument, so I was praying that I would like the movie so I wouldn't have to say anything bad about it here.

And now that I've seen it, all I can think of is to ask "is that all there is?" It's an incoherent "thriller" with pretensions towards saying something important ... like far too many movies that try to adapt genre conventions to Big Statements, In the Cut does a terrible job of being a thriller, and is probably proud of that fact. I imagine director Jane Campion would say I've missed the point, that I should move beyond the genre and see what she's "really" doing, but the movie is a mess, and that's not my fault, it's hers. When she's making the Big Statements about What Women Want and What Sex Means and Aren't Men Dicks, she may be sophomoric but at least she's paying attention to what she's doing. But the "thriller" is sloppy, as if Campion couldn't be bothered, which is fine, but why make a thriller if you aren't interested enough to get it right? There are loose plot threads everywhere, along with the proverbial plot holes you can drive the proverbial truck through, yet I don't think Campion cares or wants us to care.

Clearly I'm not the only person who thinks the film is a failure. IMDB viewers give it 5.1 out of 10, while Metacritic, which tallies critical opinion, gives it 46 out of 100. But my friends loved the film, as did the Chronicle's Mick LaSalle, who had the Little Man falling out of his chair. But I thought it was a nothing film, not good but also not bad enough to be worth the time I've spent writing about it here. I suspect if it wasn't for our argument last year, I'd forget I'd even seen this movie a month from now. Five on a scale of ten.

Man, I am pathetic. I just helped Sara move ... well, I helped in Oakland, now she's off to Sacramento where others will pick up the trail, including Robin who's working both ends. Me, I can barely type, much less move my body ... I'm not as young as I used to be.

Meanwhile, there's a new blog in town: Sister Spirit. I'll get a link going on the side of this blog later, but for now, just wanted to say hi to Chris and Karen. They just gave us a sense of what they like in movies by listing some films for which they would assign 10 on a scale of 10 ... these include Frida and Whale Rider for Karen, Lantana, When Harry Met Sally and Far From Heaven for Chris. Of course I had to check my own ratings to see if I agreed with those two, and here's what I got:

So I guess my tastes are closer to Chris than to Karen. (A few more of my "10" movies: Bullet in the Head, The Hours, and Y tu mamá también.)

Not sure what to make of this. If you ever use Google, you've probably noticed the ads that appear with your search results, ads that are related to whatever you are searching for. Here, I'll do one ... I was looking for the Loading Zone song "Can I Dedicate" and searched Google ... the ad that turned up was for a "loading zone cargo gate."

Well, Gmail does the same thing, which has turned off some people who know the only way for Google to give appropriate ads is to search your email. Their fears are mostly silly, IMO ... it's not a human being searching your email, it's a bot, the same kind of bot you probably thank a hundred times a day for removing spam from your mailbox. Anyway, yesterday Robin sent me a photo of herself at work and called the message "Your holiday wife." I, Steven Rubio, replied with an I-Love-You email, and she tells me the "sponsored link" (i.e. advertisement) that appeared was for an interracial matchmaker service.

We went to my cousin Jon's house tonight and watched old home movies, some from the mid-40s (in color!). It was spooky seeing my mom laughing and having fun ... she was probably in her teens, early 20s at the latest, and she was happy. Freaked me out.

And here's a couple from Jackie's visit ... she brought along a new husband! Here's sisters Jackie and Jillian: 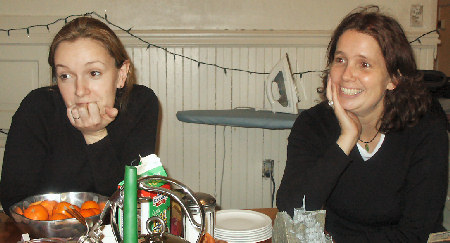 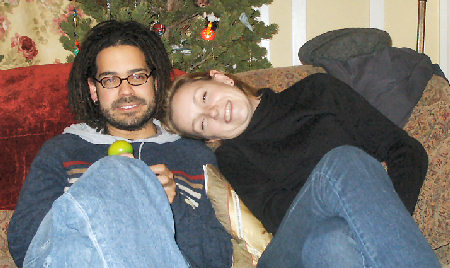 And here's the new lovebirds: 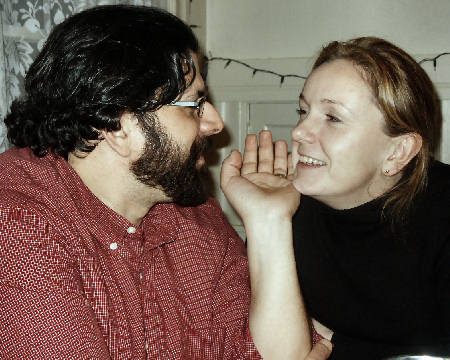 As always, larger versions are available.

Lots more pix coming. My brother has posted a series of old family photos here ... I've copied a couple to give you an idea of what he's got. Here's one of my parents: 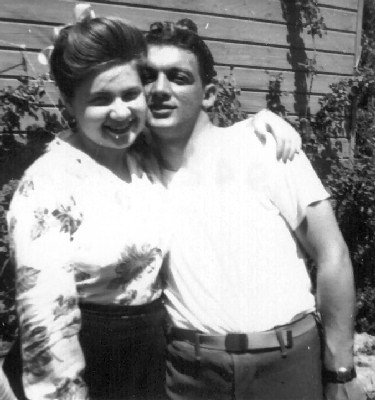 And here's one of me and my brother: 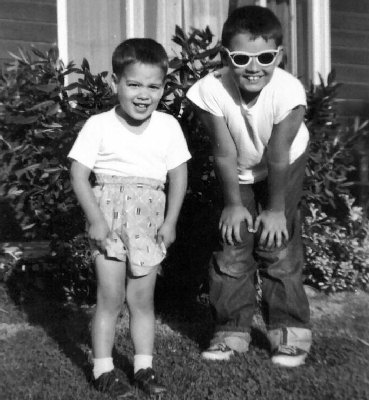 Check out the others at the above link.