I think I should give up on these ... I can't trust the Karma's software to pick my top tunes. Here they are at the end of October, last month's rankings in parentheses:

Only song to fall off the list was Lucinda Williams' "Concrete and Barbed Wire," which fell from #10 to #20.

As usual, I don't understand the above. I can't remember the last time I heard that Latifah song, but it's always #1. Latifah and Bruce have been #1/2 for three months now.

Roxy Music, "Out of the Blue"

Others have linked to this, but I suppose now it's my turn, considering my lifelong hatred of Dick Nixon, which is shared by the author of this piece, Hunter S. Thompson:

Richard Nixon looks like a flaming liberal today, compared to a golem like George Bush. Indeed. Where is Richard Nixon now that we finally need him?

If Nixon were running for president today, he would be seen as a "liberal" candidate, and he would probably win. He was a crook and a bungler, but what the hell? Nixon was a barrel of laughs compared to this gang of thugs from the Halliburton petroleum organization who are running the White House today -- and who will be running it this time next year, if we (the once-proud, once-loved and widely respected "American people") don't rise up like wounded warriors and whack those lying petroleum pimps out of the White House on November 2nd.

Four more years of George Bush will be like four more years of syphilis ... Only a fool or a sucker would vote for a dangerous loser like Bush ... He hates everything we stand for, and he knows we will vote against him in November....

Back in June, when John Kerry was beginning to feel like a winner, I had a quick little rendezvous with him on a rain-soaked runway in Aspen, Colorado, where he was scheduled to meet with a harem of wealthy campaign contributors. As we rode to the event, I told him that Bush's vicious goons in the White House are perfectly capable of assassinating Nader and blaming it on him. His staff laughed, but the Secret Service men didn't. Kerry quickly suggested that I might make a good running mate, and we reminisced about trying to end the Vietnam War in 1972.

That was the year I first met him, at a riot on that elegant little street in front of the White House. He was yelling into a bullhorn and I was trying to throw a dead, bleeding rat over a black-spike fence and onto the president's lawn.

We were angry and righteous in those days, and there were millions of us. We kicked two chief executives out of the White House because they were stupid warmongers. We conquered Lyndon Johnson and we stomped on Richard Nixon -- which wise people said was impossible, but so what? It was fun. We were warriors then, and our tribe was strong like a river.

That river is still running. All we have to do is get out and vote, while it's still legal, and we will wash those crooked warmongers out of the White House.

People that I actually talk to as opposed to those who read me here will tell you that I've been all blustery about how the election is going to be a landslide for Kerry. I guess I should say something in "public."

The popular vote will be close, but in favor of Kerry. The electoral college will go strong for Kerry ... he'll get more than 300 electoral votes ... but it won't be decided right away. (By that I don't mean we'll have to wait months for the repugs to take it to court, I mean no one will project Kerry as the winner the second polls close in California, but he'll be the winner when you go to bed, if you live on the West Coast and you stay up late.)

If I'm wrong, I won't care that I look bad here because I'll have killed myself by then. But if I'm right, you read it here first (or at least, I'm one of the first 10,000 ... sheesh, apparently even Wonkette's calling it for Kerry now).

scan of the day

The Smith Family, sometime before Katie was born, which makes it early 60s since Tami seems to be standing up. Robin's mom looks pretty gorgeous here. 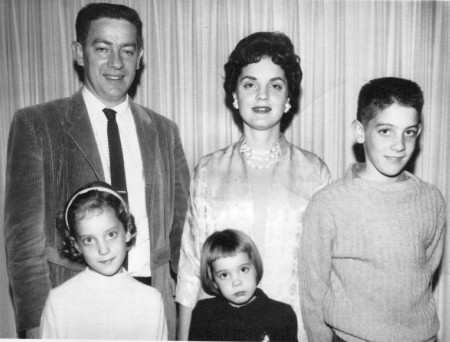 use my cell phone

I'm not going to answer my regular phone until after the election. You can leave a message, but I'm screening calls for the duration ... I'm sick of getting canned calls from Gov. Arnold et al. So if you want to talk to me, call the cell phone. If you don't know the number, it's the same as the house phone only with a prefix of 207.

Jillian goes to one baseball game a year with me, and this year, for some reason, we spent most of the afternoon talking about paradigms, in particular the changing paradigm in baseball. Jillian doesn't care about baseball, but she knows about paradigms, and she seemed pretty interested in my argument that the paradigm is changing right now as we speak.

Brief explanation: Bill James published his first mainstream book in 1982, in which he made the case for the useful importance of critical statistical analysis in running a baseball franchise. Little by little, this kind of analysis is creeping into the front offices of baseball clubs ... most recently, this was brought to everyone's attention in the book Moneyball. Because baseball is so mired in the past, the change has come very very slowly ... sadly, the Giants are one club that resists the inevitable here ... and it is inevitable.

But Jillian was puzzled ... my explanation made statistical analysis seem to be a clear good, so she wondered why the paradigm hadn't already shifted. I said not everyone shared my positive feelings about the shift, and referenced again the fossilized notions that have taken root in baseball for more than a century.

But things are changing, and one way you know this is because the Boston Red Sox won the World Series. As John Shea said in today's Sporting Green:

After an 8 1/2-decade drought, it took a guy from Yale, who was hired as general manager at 28, who subscribes to the theories of Bill James and Moneyball, to construct a roster of players who resisted the evils of a ghastly and ghostly past and turned the Red Sox into champions.

The Boston Red Sox spent a lot of money, and you'll hear some people claiming that the only reason the Sox finally ended The Curse was the money. But the truth lies in the simple fact that the Boston Red Sox thought it was a good idea to give a job in their organization to Bill James. And they won the World Series. For the first time in 86 years.

The shift is inevitable. Thanks to Boston, the shift is coming sooner than you think.

Which is ironic, considering that there was a time when Boston was so far behind the times as to make them the putrid scum of baseball. Boston, you see, was the last major league team to sign a black player. And I suppose it deserves mention that even now, the best "minorities" on the team are Latino, not African-American ... it's at least possible that Boston is still less than hospitable to black players, although folks who know more about it than I do (i.e. they live there) tell me that's a lie. In any event, here's to Pedro Martinez, and David Ortiz, and Manny Ramirez, and Theo Epstein and Bill James, and paradigm shifts.

If you want to see/hear Bruce doing a song for John Kerry, click here.

(Edited to note that the video seems to be pretty low-fi.)

Jon Carroll says it all:

massachusetts is on a hot streak

My sister Sue moved to the East Coast some years ago. She was never much of a sports fan back in the day, but she's adopted the Red Sox in her new life, and I can see why ... one thing sports does is help connect us to a larger community, and while I have never experienced such a big move myself (having lived all but one year of my life in the greater Bay Area), I can imagine that sharing Red Sox fandom is a good way for Sue to feel a part of her newer surroundings.

So this one's for Sue, the closest thing I've got to a Red Sox fan: congratulations!