Home Archives Profile
performance
call this one oscar run 1a 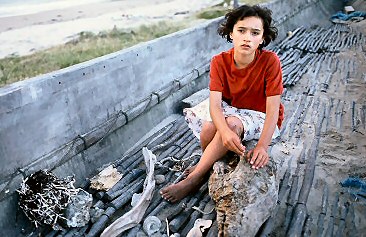 We saw Whale Rider the other day. I'd intended to write something about it, but after watching it, I didn't have much to say, so I passed. But now that the Oscar nominations are out, it's time for the third annual Steven Rubio's Online Blog Oscar Run, so I'll start with this film, whose star, Keisha Castle-Hughes, picked up a nomination for Best Actress.

A nomination that was well-deserved, since she was easily the best thing about Whale Rider. Without her, it's a decent mélange of fantasy, feminism, and coming-of-age. With her? Well, it's better than decent because she is so excellent. To begin with, Castle-Hughes has the look of a star, the answer to the question "what would Jessica Alba have looked like at 12 if she had Maori ancestry?" Her performance in Whale Rider destroys pretty much all the possible clichés such a role offers: she isn't too precocious, yet she expresses clear intelligence in a believable manner, she runs a realistic gamut from little-girl to budding teen to old-beyond-her-years, she takes what is ultimately a stock character and creates something identifiably grounded in the actual lives of young people. All this while existing within a fable about old values, new worlds, and the power of girls that is pleasant enough but nothing special. Seven on a scale of ten for the movie, much more than that for Keisha Castle-Hughes.

BTW, it's usually a sign of a lesser film when the only nomination it gets is for one of the actors. Whale Rider is a good example of this, a movie that would be inconsequential if not for Castle-Hughes. Think of Unfaithful from last year, where Diane Lane turned glop into something watchable. Hopefully, the other two movies in the category of "Got One Nomination, for Best Actress" will prove me wrong ... I don't have much hope for Something's Gotta Give, but Kim has spoken highly of Monster.

Meanwhile, over at Movielens, a site that predicts how you'll like a movie before you've seen it, I've checked to see how they think I'll rate the movies I'll try to watch over the next month. Here's the list, adjusted for a 1-10 scale ... I'll look on this again after the Oscars to see how accurate Movielens was:

9: Capturing the Friedmans, In America, American Splendor, City of God