Guess it's time for that annual family tradition, the open letter to all our friends, updating them on what we've been doing the last year. We've been sending out these letters for, oh, I don't know, about one year now. I can still remember the first time we did it, back in the winter of '02. But enough of nostalgia, let's get down to 2003!

Steven got laid off at the butcher shop, and so he's been out of work the last few months. For the most part, he's holding up, although once in awhile Robin finds him standing in the middle of the kitchen with a glazed look on his face and a ham hock in his hands. Things may be turning the corner, though ... word is they're hiring at the toxic waste factory.

Robin and Steven were saddened by the passing of their beloved pet, Spot: 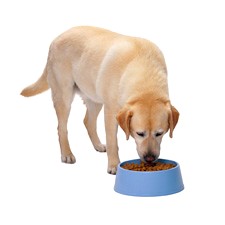 Spot died of a urinary infection ... she suffered a lot near the end, and it was for the best when she was put to sleep. Steven spent his spare time as an unemployed butcher washing the pee smell out of all the furniture.

The last couple of months have been busy ones for the Smith-Rubios. First, we went on a trip to celebrate our 30th anniversary. Robin got sick of Steven after two days, though, and punched his lights out:

So Steven crushed Robin's foot with a sledgehammer, necessitating an operation that has Robin laid up for several weeks. To teach Steven a lesson, Robin moved to Atlanta for her job, leaving Steven destitute, which serves him right.

Neal and Sonia and Sara and Jon are doing fine ... hey guys, if you get a chance, could you send me some cigarettes? My current address is Oswald State Penitentiary, Emerald City Wing.