Using the same rules as with the previous post, here are the Top Ten Movies of All Time Where Steven's Opinion Is at Odds With the Masses. First, the ten movies that I like way more than the rest of the world:

And the ten movies I dislike way more than the rest of the world:

Over the years, I've gotten more and more hopelessly behind on my popular arts. I am still more current than is appropriate for a 50-year-old man when it comes to television, but with movies and music, I'm always about a year behind. The reasons for this are twofold: one, I'm lazier as I get older, and two, I am one of those people who relies on critics, and so I'm don't usually get around to everyone's top ten movies or albums of the year until after the polls have told me what to see or hear, which is at the end of the year. So, for instance, I can do a much better job right now of telling you my Top Ten Movies of 2002 than I could have a year ago, but I'm not sure I even saw ten movies from 2003 yet.

Anyway, with the help of the Internet Movie Database and Microsoft Excel, here's a little exercise to help explain my taste in movies, based on films from 2002. This first Top Ten List is of movies from 2002 that I liked more than the average person. This is calculated by comparing my rating for each film on a scale of one to ten with the ratings of the voters at the IMDB. You might call this my Top Ten Underrated Films of 2002, except in some cases these movies were well-received but I liked them even more than most folks.

And now, the reverse of the above, what you could call my Top Ten List of Most Overrated Films of 2002:

You should now be able to see how my taste compares with the masses.

The Hidden Fortress is something of a departure for Kurosawa. It has some of the epic sweep we associate with his work, it has the sumptuous cinematography (it was his first wide-screen movie), it has Toshiro Mifune as a warrior from past times. But it also has humorous passages and (this is connected to the humor) a pace that is more reflective and less hyperactive than films like Seven Samurai or even High and Low. The film has had a bit of a revival since George Lucas admitted being influenced by it for parts of Star Wars, but that influence is tenuous at best ... the origin for the R2D2-C3PO relationship is here, but not much else. The Hidden Fortress is better than a Star Wars movie, I suppose, but I found it a bit disappointing. The film looks gorgeous, and a few set pieces are stunning, in particular a scene where slave workers rise up against their oppressors. But the comic relief isn't very relieving ... the film runs about 2 1/4 hours, and it could have been 90 minutes without the goofy peasant pair. Of course, the peasants help make points about Japanese class society, and it's nice that Kurosawa is trying to get something more than just action out of the situation. Ultimately, though, it's not funny enough to warrant all the comic bits, and not quite terrific enough that the comedy doesn't matter. Seven on a scale of ten.

1. What was your biggest accomplishment this year?
Going to Spain

2. What was your biggest disappointment?
losing the Mass Comm job

3. What do you hope the new year brings?
good health to everyone I know, including me

4. Will you be making any New Year's resolutions? If yes, what will they be?
Yes, but why tell what they are ... I won't keep any of them.

5. What are your plans for New Year's Eve?
Well, I don't suppose they'll play that HD yule log again, so I don't know what I'll do

OK, I'm obviously still fiddling with the format of this thing, but in the meantime, I've posted xmas pix to the new Photo Album section, which you can see to the left, at least at the moment.

Lots of friends and family over to the house the last few days ... we didn't go anywhere ourselves on account of Robin being laid up with her foot. Jackie came on Tuesday night with Jillian and Doug ... she's visiting her sister for the holiday, we ordered Indian food, opened presents, watched The Snowman. Last night's xmas eve visitors included Linda and Eddie, Sara, Neal and Sonia and Alex. We ate every damn thing: tamale pie, mac and cheese, jamon serrano, one dessert after another. And opened presents, of course. This morning's xmas breakfast included Neal and Sonia, Sara and Jon, and Alex, and included eggs and potatoes and english muffins and bacon and jamon serrano once again.

Xmas swag for yours truly included DVDs of Straw Dogs, Spellbound, and the Old Grey Whistle Test. The latter was esp. interesting in that it has a random feature where you can mix the various musical artists so you don't know who's coming next. Lots of wonderful stuff, as we found when we randomed our way through, spending 15 seconds with every artist: Bruce, John Lennon, U2, Bonnie Raitt, Roxy Music, etc. Yet when the Ramones circa 1980 came on, everything stopped ... we had to listen to that one all the way through.

Other swag included the usual books and clothes and calendars and art works. Got some good stuff, as usual, but to be honest, this year's xmas was mostly the "we went to Spain last month" xmas.

Here's a nice picture of Eddie from xmas eve: 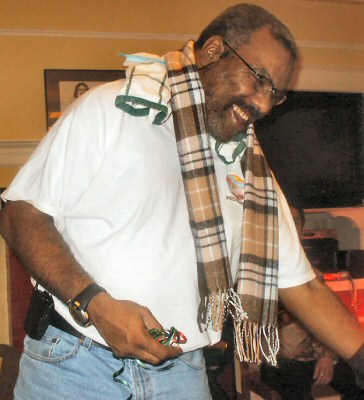 Ladies and gentlemen, the High-Definition Yule Log! (Of course I'll be watching.)

Hey: here's a message of holiday cheer to everyone who reads this. I don't send xmas cards, so this is as close as I get. And now that I have comments enabled on the blog, here's a request that everyone who reads this adds a comment ... it'll be like Thanksgiving where you're supposed to go around the table telling what you're thankful for, except you don't have to feel thankful if you don't want!

thinking of old friends at xmas 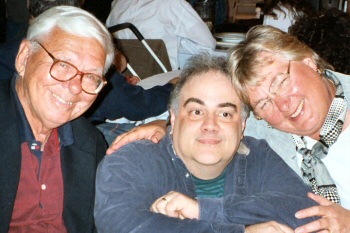