I had a lot of fun watching The Last Seduction. The film was as amoral as its main character; I'm not sure it was supposed to be funny (well, OK, I think it was supposed to be funny AND something else), but I laughed a lot. Linda Fiorentino inhabited her femme fatale character like she was a born-and-raised preying mantis. Every man in the movie was stupid whenever he thought with his dick ... since most of the men never got beyond thinking with their dicks, that made for a lot of stupid guys, as if they'd lost an IQ contest with William Hurt's character in Body Heat. The occasional guy who tried to get past his dick was just as doomed as all the other guys, in part because even they eventually returned to the appendage that defined them. The Last Temptation might make you feel dirty if you took it seriously. I didn't (feel dirty, take it seriously). Eight on a scale of ten.

Curb Your Enthusiasm returns with new episodes this Sunday, and Tim Goodman has his usual
smart take on the show:

Season 4 of "Curb Your Enthusiasm" continues, in the span of its first four brilliant episodes sent for review, an audacious assault on what is OK to laugh at in this country. Larry David, who brought the world "Seinfeld" and has since honed his skills at elevating myriad pet peeves to comic genius, is unparalleled in this country at making daring comedy squeamishly funny.

Only the British import "The Office" can compare. Awkward, uncomfortable, embarrassing -- this is the area David mines for riotous humor.

It's not supposed to start for a few days, but nonetheless, the local CBS outlet just showed up on our HD menu, so we've now got nine HD channels (ABC, NBC, CBS, PBS, ESPN, two INHDs, HBO and Showtime).

What will this actually mean at our house? Well, if I want to test it out, the Sun Bowl is supposed to be in HD later today. Joan of Arcadia is the only CBS series we watch, but it is in HD, so that will be nice.

Blogger finally started working for me again. First thing I did was move all two years of posts over to this new blog. I left the archives at the old site, for people who might have linked to a particular post (hey, it happens). But you can get the whole two years right here, right now. Since Blogger didn't have "categories," that part of the archiving process will be updated only gradually, but the "date archives" work just fine. Note that the monthly archives listed on the left sidebar only go back to the most recent ten months, but if you click on "Archives" you can get to all of them.

I wasn't gonna mention it again, but I just finished reading King Kaufman's year-end sports wrap on Salon, and he said zero, zilch, nada about the best Bay Area sports story of 2003. So, one more time: 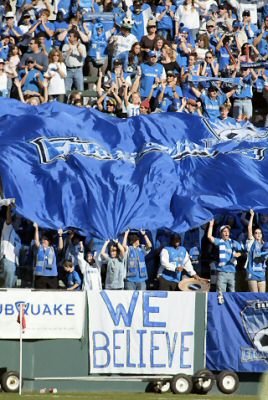 Better Luck Tomorrow got made. That in itself would seem to be a call for congratulations, considering how difficult it was for the production team to actually finish the film. It looks professional, too ... the acting doesn't stink, the filmmaking doesn't do anything original but neither does it stink ... that's the best I can say for the movie, it doesn't stink. It doesn't do much of anything else, though. It presents overachieving Asian high schoolers in a different light than we usually see them, and it's nice to see something underneath the stereotypes. But it doesn't say much of interest about high schoolers, Asian or otherwise ... I can imagine young people who haven't seen this story told a hundred times before who will think this is their story on the screen, and more power to them, but think Rebel Without a Cause meets Goodfellas with an Asian cast and you've got pretty much all you need to know about Better Luck Tomorrow. Five on a scale of ten.

I finally get to wear my contact lenses again.

Of course, my eye is still fucked up, and it probably looks worse without glasses to cover it.

This may be irony.

I sure wish Jon Stewart wasn't on vacation right now:

The FBI claims almanacs are markers of possible terrorist action because "The practice of researching potential targets is consistent with known methods of al-Qaida and other terrorist organizations that seek to maximize the likelihood of operational success through careful planning."

Students ought to be able to use this one. "Sorry, teacher, but I couldn't do my assignment ... my mom's an FBI agent and she said doing research was an early sign of terrorist tendencies."

1. Buffy. The class I taught in the spring. The final episode ever. "The Body" out on DVD.

2. Speaking of DVDs, all those great cable shows I didn't see when they were first on: Oz, esp. the last episode of Season Two, when Said returned to prison of his own accord. Sopranos. Six Feet Under. Queer As Folk. Soul Food. Sex and the City. And one of the greatest mini-series of all time, The Corner.

3. Getting digital cable, meaning I can now watch all of the above when they are on. First, though, I caught up on past episodes of shows like Penn and Teller: Bullshit and the great Curb Your Enthusiasm.

4. And now I get to watch The Wire, the best series on teevee today. And The Office, which is so brutally on-target that it's not really funny. And Dead Like Me, which isn't really all that good but I watched it anyway. And Angels in America, which WAS really that good.

5. Not to forget, this was the year we got HDTV.

6. Not that broadcast teevee was completely worthless. Besides Buffy, there was the silly 24, the venerable NYPD Blue. the new Joan of Arcadia, the missing-in-action, best-new-show-of-broadcast-teevee-season Karen Sisco. Not to mention Triumph, the Insult Comic Dog.

7. On the other hand, broadcast teevee is also where Aaron Sorkin was booted from The West Wing.

8. And then there's that hazy world of basic cable, where you'll find the wonderful Daily Show with Jon Stewart and the hot and vile The Shield.

9. "London Calling" at the Grammies.

10. Adding their names to the teevee-watching oglers Hall of Fame: Kristin Proctor on The Wire and Charlotte Ross on NYPD Blue.

OK, rather than list my top ten albums of the year, I'll list ten things I've listened to (or, in one case, haven't listened to) over the past year that mattered, and were in one way or another new to me. These are in no particular order.

1. My brief time on emusic.com. I downloaded hella stuff from them during the year ... John Fahey, Koerner Ray and Glover, Otis Rush, stuff like that.

2. Harry Belafonte, Calypso. We grew up listening to this album; in 2002, I finally got my own copy.

3. The Streets, Original Pirate Material. An example of my one-year-lateness, this was released in 2002 but hit my consciousness in 2003.

4. Missy Elliott. She's always been around, but now I know how much I like her.

5. Bruce Springsteen: This Is Your Life. An 8-disc DVD bootleg covering thirty years or so of Bruce's career. So full of amazing stuff, I'm still only 3/4 through the damn thing, and I've had it for months.

6. Amy Rigby. Not sure how it all got started, but somewhere during 2003 I started listening to Amy Rigby. Next thing I knew, I was scarfing up all her albums from her website.

7. Ian Hunter, Rant. This one's from 2001, an artist I very much loved in the 1970s, making a remarkable album many decades later.

8. Pink, Try This. Too soon really to say if I'll end up loving this, but it was highly anticipated and so far so good. Also "Free" from the flipside to the "Trouble" single.

9. MP3 mix compilations. The day of the 80-minute mix is coming to an end. Now the trick is to construct small, interesting setlists from storage media that contains tens of thousands of tunes.

10. No Sleater-Kinney. Absence may make the heart grow fonder, but I don't need that kind of growth. Please come to the Bay Area in 2004. [ed. note: actually, they played SF in early February, my bad]

Posted at 10:40 AM in Bruce Springsteen, Music, Sleater-Kinney | Permalink | Comments (0)