How come whenever somebody famous dies, all over the Internet you'll read people tripping over each other, each making certain that they express their condolences to the family and friends of the dear departed?

If you run this through a translation engine, here's what you'll get:

"Something happened in the world, and I noticed it. Isn't that cool? Hey, if anyone connected to a famous person ever sees these pathetic words, I'm sorry for yer loss!"

Well, I know Steven warned me not to read his two posts about A's fans, yet he knew I'd read them anyway just like I read all of his posts. Heck, I even read the soccer and Buffy ones! A couple people have asked me if I was offended by Steven's comments about A's fans.... I have to say I wasn't, because even though I'm a big A's fan, I know he wasn't talking about me. Instead, he writes that I am "the only nice A's fan on the planet" (see March 7), which, whether that's actually true or not, feels pretty good to me!

For years, I have stated I am an A's fan first and a Giants fan next. While you won't catch me wearing one of those A's-Giants split baseball caps, I have to confess it's sometimes weird during a game to realize I'm wishing that Benito Santiago hits into a double play or that Gallaraga strikes out. I'm not used to cheering against the Giants, and I only ever do so when they play the A's. But I never diss the Giants or their ballpark or their fans ... and I'm guessing that's one of the reasons why Steven calls me "the only nice A's fan on the planet." I'm glad he thinks so... but I'm guessing that old gal who nearly ripped my left ear off at the Oakland Coliseum a few years back when I "battled" her for a foul ball would probably disagree with him!

me without you (sandra goldbacher, 2001)

Me Without You isn't a great movie, although it has its moments. It's mainly noteworthy to me because of the performance by Michelle Williams. Like, I imagine, lots of other people, my entire exposure to Williams comes from Dawson's Creek, which to be honest I only watched a couple of times, so I can't say that Williams made much of an impression on me even there. But she's terrific in Me Without You, and reading reviews of her earlier work, it appears that Williams has been a fine actress for awhile now. As for actually recommending the movie, I'll note it's good enough that you'll probably like it if the plot sounds interesting (two girls growing up as best friends in London in the 70s and 80s), but not quite good enough that you'll like it if the plot sounds boring. Seven on a scale of ten.

ok, another one Chris should avoid

Some A's fan named Catherine Howard appears to have a regular column on the SFGate website, where the following recently appeared. It's an anti-Giants screed, noteworthy only because unlike most of these items, which are filled with venom, this one tries for humor. At one point, Howard asks, "What's the matter with Giants fans..? THEY CAN'T HECKLE!"

So let me practice my heckling skills.

I hope the A's move far away from Oakland, breaking the hearts of pieces of shit like Catherine Howard. I enjoy the benefits of having two great teams in my backyard, but I will happily give up that enjoyment for the greater enjoyment of seeing A's fans miserable for the rest of their lives because their team left. In the 21st century, there are no fans I dislike more than Oakland A's fans; their misery will be my pleasure.

There are plenty of reasons to hate A's fans, but this perhaps sums it up: they want our hatred, because they hate us. Evidence? Well, I don't know more than one or two A's fan who rooted for the Giants in the 2002 World Series ... they all cheered for the team from SoCal, because they hate us. Conversely, I don't know a single Giants fan who rooted for L.A. in '88 against Oakland. A's fans, lacking any real rivalries, have decided to adopt us as their enemies ... this despite the fact that the tenuous nature of their franchise as a long-term resident of the Bay Area would suggest they should be making as many friends amongst local fans as possible ... they hate Bonds, they hate KNBR, they hate the Chronicle, they hate Pac Bell Park, they hate Giants fans, they are, in short, a bunch of haters who don't deserve the memory of their many championships. I can tell you this: if the Giants ever won a World Series, their fans would treasure it forever. But A's fans only seem happy with their titles because they can use them in arguments and bar fights. They have a great team, a great history, some of the most amazing players of all time ... and all they do is hate on the Giants and their fans. So fuck them, I hope they lose their team. They won't care, since they'll still have the Giants to hate, and that's how they participate in baseball, anyway: as haters. I doubt they'd even notice the A's left, as long as they could complain about Pac Bell Park.

My primary extracurricular activity in junior high and high school was acting. I have no idea if I was any good ... after all, I never saw myself perform ... although I often got important roles, so maybe somebody liked me. The part for which some people seemed to think I was born to play was my last, as Winston Smith in 1984.

By that time, I was smoking a lot of weed, and I was pretty bored with high school. In my senior year, Antioch High started up a new course ... I forget the title, Arts and Humanities or something ... I signed up, liked the idea, but mostly blew it off because it came too late for me to call up any useful level of engagement.

Except once. For a big project, I put together a performance of "The End" by the Doors. No, the band didn't show up at AHS ... but I decided the song would make a nice stage thingie. That was about the extent of my contribution ... as I remember, I let people know I trusted them to do good with what they did well, and so I was lucky to get dancers who knew how to dance, choreographers who knew how to choreograph, backstage technicians who knew how to tech ... it was a great team of workers, and my memory is the ultimate performance was pretty impressive. Robin would know, ask her.

When I look back on it, I think how frustrating I must have been to my teachers. I clearly had brains and some kind of indefinable talent. I also clearly had a mess of neuroses. So I rarely rose to the occasion. I suppose they blamed it on drugs, which is stupid. But that one time, I did all right, I think.

Thread in alt.gossip.celebrities includes the following:

"Kristin Proctor made a *serious* impression on me last night. Kristin either has incredible genes or a fantastic surgeon."

"What is the name of the actress with the knockers, Nick's girlfriend? Wow."

"OMG your not kidding. It's not like I haven't seen anything like that before, but you go Nicky! That totally took me by suprise. She gets outa bed and boom! Sweet ta-tas."

"Hope she's out there for more episodes! She's Fine!"

And she has a webpage.

My lovely wife has been gradually transforming our living room into something very sweet. New paint, getting close to being finished ... and now she's tearing up the carpet, discovering the wood floor beneath. Not just the floor, though ... turns out there was some quasi-art deco linoleum or something down there, too:

My sister Chris got me an old Pauline Kael book for my birthday. Lots of us have spent the last decade or so wondering who the next Pauline would be. But that's silly, since the most Kael-like writers would be so idiosyncratically personal that they wouldn't be like anyone but themselves.

Having said that, Salon has two of the best, and what's more, they are apparently married to each other. Charles Taylor and Stephanie Zacharek are both excellent. Zacharek wrote some good stuff about Buffy, and Taylor recently got off a line that was so Pauline-esque that I had to email him a fan letter. (Talking about one of the numerous torture scenes from last season's 24, he wrote "The revelation of these scenes is that even torture won't get a performance out of Harris Yulin," which is channeling Kael for sure. Me, I always liked Yulin, but I'll never think of him the same again.)

I don't have anything equally witty to say about my post-50 weekend, during which I watched soccer and baseball and Sex and the City and The Wire. It's probably crass to admit this, but the most startling moment in either of those latter two shows came when a minor character took her shirt off for a few dozen seconds of toplessness. I'm predicting a big future in Internet nudie websites for this fine actress ... and when I looked her up to see who the heck she was, I find that she's the daughter of one of the original guys in the Firesign Theatre. Not sure why, but I found this more fascinating than learning that the white guy in Barbershop is Tom and Jane's kid.

The A's took 2 out of 3 from the Giants. They're a good team. Fuck their fans, they suck. I hope they lose their team. 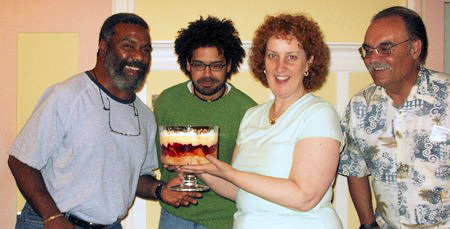